Home » Entertainment » The ‘brutally violent’ film being hailed as a masterpiece

When The Painted Bird premiered at the Venice Film Festival last year, it sparked a blaze of headlines. But not necessarily for the right reasons.

“Audience members fight each other to escape first screening of Holocaust film,” reported The Daily Mail.

Viewers were left “sickened and distressed” at the premiere, according to The Sun, after watching the “brutal scenes of incest, bestiality, rape, mutilation and murder”.

But the film also prompted rave reviews from critics, many of whom hailed it as a “masterpiece” and awarded it five stars.

So what’s the truth?

The Painted Bird is based on the 1965 novel of the same name by Jerzy Kosiński, and follows an unnamed Jewish boy growing up in Eastern Europe during World War Two.

The story sees the boy (played in the film by Petr Kotlar) experience and witness violence so brutal it would traumatise any child – or adult for that matter. 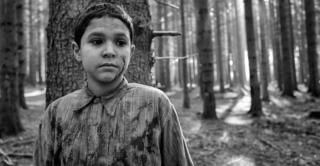 But while it was too much for some audiences to stomach, the film’s Czech director, Václav Marhoul, played down the festival walkouts.

“In the first screening in Venice, it was 1,500 people and a maximum of 70 walked out. That means that 1,430 people stayed,” Marhoul told The Guardian, in what is perhaps not the most convincing pitch a director has ever made for their film.

“And the next day, from 1,200 people, maybe five left. And then journalists are writing about this massive walkout. I don’t understand it. It’s crazy!”

Stellan Skarsgård, who appears in The Painted Bird, acknowledges the film will not be to everyone’s taste.

“I’m sure for some people it was too much to take, because when violence is presented in this unflinching way, it becomes unpleasant, and some people are more sensitive to it,” the actor tells BBC News.

“So I’m sure some of them left because of that. But I can tell you that, I was there at the Venice premiere, and I saw quite a few of people coming back – so possibly they just didn’t have three-hour bladders.”

In The Painted Bird’s opening sequence, the young boy’s pet ferret is taken and burned alive in front of him. Later, he is forced to drink alcohol and thrown into an open cesspit. At one point he is buried in the ground up to his neck and left to be pecked by crows.

Some other scenes are too graphic to be described in print. It is a disturbing watch in places and certainly not for the faint hearted.

Kotlar, who is now 13, was not exposed to the most harrowing moments of the film. Many scenes of the movie are shot from his point of view, which means he did not have to be present on set while they were being filmed.

Skarsgård notes that violence is hardly an unusual ingredient in Hollywood, but it’s usually depicted in a more sanitised way.

“There’s much less violence [in The Painted Bird] than in any Marvel film – the difference is that when there is violence, it is taken seriously,” says the actor, who himself has appeared in the Marvel franchise.

“Violence is not pleasant and should not be pleasant. So you can criticise the film for not showing pleasant or sexy or sweet enough violence, but this is depicting violence as something brutal, which it is to the people exposed to it.

He adds: “I don’t want kids to grow up thinking violence is like a Star Wars film where 150 storm troopers die, and you don’t spend one second thinking about their wives and children! Violence has consequences, and you also have to have films that acknowledge that.”

But it’s important to note that violence doesn’t define the entire film. Many critics said the three-hour epic, which is shot in black and white, is also beautifully cinematic, telling its story in a largely visual way with minimal dialogue.

“I can state without hesitation that this is a monumental piece of work and one I’m deeply glad to have seen,” said The Guardian’s Xan Brooks, but added: “I can also say that I hope to never cross its path again.”

‘A kind of magic’

The Painted Bird is finally released this weekend, having been delayed by the coronavirus pandemic. It’s available digitally, but also being screened in selected cinemas, a deliberate move by the filmmakers who were keen to have a big screen release.

“It’s a film that’s very difficult to watch on your iPhone, since the imagery is what speaks to you,” says Skarsgård. “It needs the theatre in a way, or at least a very big screen, because it’s incredibly beautifully shot. The contrast between the beautiful pictures and the harsh and brutal story, really rocks you in your seat in a strange way.”

The debate about streaming and cinema has been raging in recent weeks as theatres begin to reopen after lockdown. Christopher Nolan’s Tenet has been successful at the UK box office but Mulan skipped the big screen for Disney Plus.

Skarsgård doesn’t necessarily believe a big screen release is crucial for every movie, because “not all films are dependent on the cinematic language” – but he says The Painted Bird is one that definitely is.

While it’s not impossible for a film which is long, subtitled and shot in black and white to be successful (see 2019’s Oscar-winning Roma), it also doesn’t scream box office hit.

For the film’s director, Václav Marhoul, the black-and-white treatment was necessary given the material in the book.

“I’m one of those filmmakers who – even despite today’s amazing possibilities of digital filming – is convinced that the negative is basically irreplaceable and that it gives film a kind of magic,” he explains in the film’s press notes.

“The negative is more authentic, especially for something like The Painted Bird, which is in black and white precisely to reinforce the basic narrative line. Filming it in colour would have been a catastrophe. It would have looked entirely unconvincing, fake, commercial.”

Skarsgård concludes: “It’s a film of a kind that’s very hard to finance nowadays, it’s in the style of the classic very cinematic films from Eastern Europe in the 60s and 70s, but it doesn’t sell much popcorn, and popcorn is very important nowadays.”