Season 5 tracks the collapse of the royals’ marriage. In a joint interview, Elizabeth Debicki and Dominic West discuss the challenge of taking on these roles and the scrutiny the show has received since Queen Elizabeth’s death. 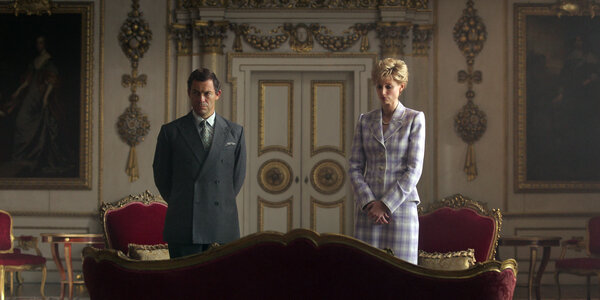 Dominic West and Elizabeth Debicki had no illusions about the expectations and challenges they’d face as the latest incarnations of Prince Charles and Princess Diana in “The Crown.”

After all, their predecessors in the roles, Josh O’Connor and Emma Corrin, had each won a Golden Globe and an Emmy for their portrayals in Season 4. And West, 53, and Debicki, 32, were charged with depicting the most precarious chapter of the Charles and Diana story: the painfully public implosion of their royal marriage.

Season 5 of “The Crown,” arriving Wednesday on Netflix, is set during the apex of their marital imbroglio in the early to mid-1990s, when Charles’s affair with Camilla Parker Bowles and Diana’s tell-all with Martin Bashir — which included her complaint that “there were three of us in this marriage” — made for tantalizing tabloid fodder. The show arguably has never recreated events, as imagined by the creator, Peter Morgan, that so many viewers already have strong feelings about.

And then, in early September, the death of Queen Elizabeth II turned up the heat even more, as some of her majesty’s high-profile subjects took aim at the series.

The former prime minister John Major told The Daily Mail that people should boycott the show and said that a scene in the new season, in which his character meets with Charles, who is pushing for the queen’s abdication, was “damaging and malicious fiction.” Judi Dench, writing to The Times of London, called for adding a disclaimer to the start of each episode, adding that Netflix “seems willing to blur the lines between historical accuracy and crude sensationalism.”

“It seems to be upsetting a lot of people,” West said with a nervous laugh in a recent video interview with Debicki.

“If anybody thinks that we don’t feel a tremendous amount of responsibility, then they would be wrong,” Debicki added.