Democracy, as a certain other news outlet has famously observed, dies in darkness. But if you just want to beat it up and humiliate it for an hour, simply stick it in a box.

Or two boxes, to be more precise. The devices that CNN deployed Thursday night, in a prime time live drawing for the July 30 and 31 Democratic debates, turned a momentous and fraught election into a farcical combo of the N.B.A. draft and a Lotto drawing.

The drawing took place in three rounds, separated by generous commercial breaks, and were analyzed before, after and during by Anderson Cooper and a seven-person panel. Brianna Keilar, Victor Blackwell and Ana Cabrera got the job of shuffling clunky placards with candidate names and debate-night dates, as if they were running the world’s wonkiest three-card monte game.

Is it any surprise that CNN, the home of saturation coverage and interminable countdown clocks, would try to wring more airtime out of the debates? The first pair, hosted by NBC News in June, smashed ratings records for the Democratic primaries. They were the hit of the summer, the biggest thing on TV since Daenerys Targaryen went negative on King’s Landing.

Now CNN would get “Game of Podiums,” albeit only for two nights. But … what if there was a third?

So CNN’s panel spent several excited segments speculating about a drawing that the network controlled and could have completed before the first ad break. “This is the luck of the draw, literally,” Gloria Borger informed us. John King broke out his magic screen to highlight potential matchups by scrawling the word “Vs.” Wolf Blitzer added whatever quotient of this-is-big-news-because-Wolf-Blitzer-is-here that his presence implies.

It was a rare chance to see a network generate punditry and render it useless in real time. When the drawing was two-thirds done, CNN’s political director, David Chalian, declared, “Tuesday night is going to be moderate night!” Then, left-leaning Senators Bernie Sanders and Elizabeth Warren were added to the lineup, and suddenly it wasn’t.

This wasn’t covering the news. This was manufacturing the news, while commenting on the dexterity and suspense with which CNN was creating it. It was political journalism as Penn & Teller act.

The network did have a rationalization for the special: “transparency.” As Cooper explained, the best way to show suspicious voters there was no funny stuff going on was to shoot the whole process live, complete with overhead skycams.

Maybe so; it didn’t require an hour in prime time, though. (And times being what they are, you still needed only do a quick search on “CNN” and “rigged” to find debate-draw truthers.)

There’s nothing wrong with a 24-hour news network devoting some of those endless hours to providing forums to a political audience hungry for them. CNN usefully held a string of early town halls, which gave candidates famous and obscure alike a valuable chance to make connections and explain themselves in depth.

This, on the other hand, was an empty tease, a meta-event that exploited viewers’ antsiness for an election months before anyone will cast a vote. There must be events. Things have to happen, or seem to happen.

You could say the whole stunt was harmless and silly and we’ll all forget about it tomorrow. But that’s exactly the problem. The election isn’t meaningless. It isn’t a harmless laugh. Those mammoth debate ratings are high for a reason, and it isn’t the dazzling special effects.

To the extent, as Chalian pointed out, that Democrats are paying closer attention to this primary than they had in 2008 and 2016, it’s because of a feeling of crisis and civil chaos, a sense that toxic forces are roiling and reshaping America’s character. One night before, on live TV, a rally crowd enthused by the president chanted that one of his political critics should be kicked out of the country.

None of this is a game, not for the participants, not for the spectators, not for the chanters or the people being chanted about and not, I would hope, for the journalists at CNN.

But for one night, the channel became a cross between ESPN and the Game Show Network, and we all got played. 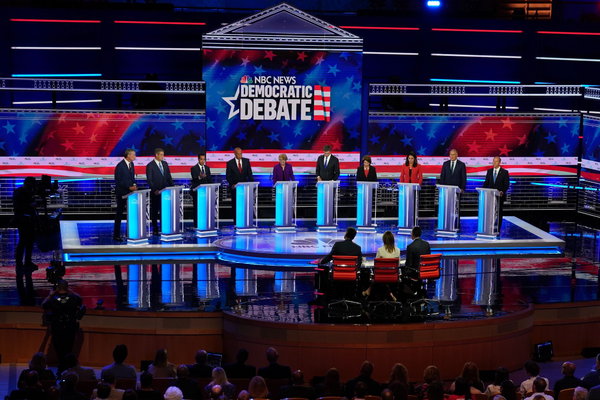 James Poniewozik is the chief television critic. He writes reviews and essays with an emphasis on television as it reflects a changing culture and politics. He previously spent 16 years with Time magazine as a columnist and critic. @poniewozik

PORTER Releases a Full Wardrobe Cabinet Made From TANKER Material