Home » Entertainment » The Shyamalan Secret to Being Scary? It’s in the Blood

Ishana Night Shyamalan was 10. The film was “Chitty Chitty Bang Bang,” and it was her turn to deliver The Speech. When your dad is M. Night Shyamalan, the raconteur director of “The Sixth Sense,” “Glass,” and the forthcoming “Old,” family movie night has rules.

“I had to get up in front of everyone and say, ‘We don’t talk during a movie and you can’t be on your phone,’” she said recently in a group video call, her father grinning from a separate window. “In our household, movies are sacred.”

“We watched a lot of horror movies,” she said. “I think that’s why I have a tough skin.”

Now 21 with an affection for the macabre — and with help from a father who knows a thing or two about directing fearsome psychodramas — Ishana is entering the big leagues. On Friday, she made her debut as a professional director with an episode of the new season of “Servant,” the creepy slow-burn horror series on Apple TV+. (The executive producers include her father — also a director of the series — and the show’s creator, Tony Basgallop.)

A senior at her father’s alma mater, N.Y.U., Ishana took a semester’s leave of absence to direct Friday’s episode and the finale, one of two episodes she wrote this season in addition to co-writing another. She also traveled to the Dominican Republic last year to work as a second-unit director on “Old.”

“A classic immigrant Indian year,” as her father, 50, put it.

Set in Philadelphia, near where M. Night was raised and Ishana was born, “Servant” centers on Dorothy and Sean (Lauren Ambrose and Toby Kebbell), career-driven parents who hire a live-in nanny for their infant son. Their pick is Leanne (Nell Tiger Free), a demure young woman whose résumé masks mysterious intentions. The biggest spoiler happens in the jolting first episode, when it is revealed that the couple’s bundle of joy is actually a lifelike doll, known as a reborn, which Sean and Dorothy’s brother, Julian (Rupert Grint), encourage her to use as a way to cope with the death of her flesh-and-blood baby. 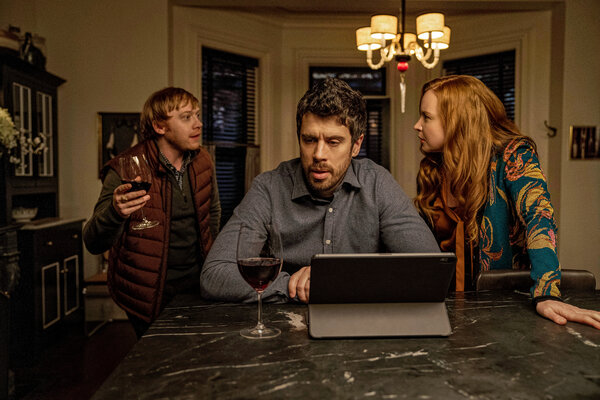 This season introduces darker supernatural elements, Leanne’s unnerving return to Dorothy and Sean’s rowhouse and surprisingly absurdist humor, including, in Friday’s episode, a farcical riff on a home invasion.

Like many shows, “Servant” shut down in March in the middle of production because of the pandemic. But with a small cast and slimmer crew, filming under coronavirus protocols at a soundstage outside Philadelphia, production resumed in mid-September, and the full 10-episode season was shot by late October. New episodes will arrive weekly through March 19, and a third season in the works.

What else is new this season? More female directors, including the filmmakers Julia Ducournau (“Raw”) and Isabella Eklöf (“Holiday”), but also more female writers, a major shift from the first season, which was written entirely by Basgallop. The Season 3 writers room is predominantly female.

“I’m very drawn to new voices that have not had a chance to tell a story,” said the elder Shyamalan, who goes by M. Night. “It’s not an agenda.”

Genre, terror, pizza: These are just some of the topics father and daughter Shyamalan discussed by video, she from her apartment in New York and he from his office at his Pennsylvania estate, just west of Philadelphia. These are edited excerpts from the conversation and a follow-up email.

First of all, how have you been handling the pandemic as a family?

ISHANA NIGHT SHYAMALAN We’ve had the same fears and anxieties as anyone. We live near my grandparents, and up until two weeks ago we were all together in the house. It ended up being a period for us to be with each other and create with each other. It was a magical time in the context of something scary.

With real life horrors happening in the world, are there benefits to exploring fictional horrors?

M. NIGHT SHYAMALAN I use genre to talk about fears and anxieties that I’m working through. With “Servant,” I ask myself how I would feel in the nightmare situation of a loved one dying. I’m someone who believes in a benevolent universe. I find it soothing at times like this to think that through.

What was it like to live and work together?

M. NIGHT I had a captive writer in the house, which was terrible for her but great for me. I’d see her in the kitchen, and I’d say “Where are the scripts?” [Laughs.] I know it stinks when your boss is in the house. I’d say, “I need this by tomorrow,” and she’d say, “I will.”

Ishana, how did you balance work and school?

ISHANA I took a semester off to shoot the episode, and I’ve been taking classes on Zoom, which has enabled me to work and study at the same time. I’m inundated with creative energy on various fronts.

Do you consider “Servant” a horror series?

M. NIGHT It falls into psychological thriller, or supernatural thriller. I try to live on that edge before it becomes just horror.

M. NIGHT When I did “The Visit,” I really embraced that. It’s a cornerstone of what I strive for, which is dark humor, inappropriate humor that comes from an umbilical cord to the characters’ pain. It’s a buoyant way to talk about struggles they’re going through. Ishana has this same sensibility in her short films, which is why I knew she could do this.

How much of yourselves do you see in the characters?

ISHANA Family pain is something everyone can relate to. It makes the show appealing and approachable. I reacted strongly to Leanne. Moving from girlhood to a world you don’t understand — that resonated with me. I don’t have parenting experience.

M. NIGHT You just blew my mind. [Laughs.] I’m thinking about why we are a good team, and it’s because you represent Leanne and I represent the parents, and we can see the other side.

Did other shows or films inspire “Servant”?

M. NIGHT “Ali: Fear Eats the Soul,” the Fassbinder film. I was blown away. I was taken with the use of color and patterns and how it was in some unconscious way making me feel the angst of the characters. But you know, I love plays. I haven’t written for Broadway, but I love the idea. I love that “Servant” is a play with four characters and we don’t leave the house.

M. Night, how much did you influence Ishana’s decision to pursue film?

M. NIGHT I knew she would be a filmmaker, but I never pushed her into it. We’d watch a movie and she would really connect with what we were watching. She was able to discern what was exceptional about what we had watched.

Ishana, how much has your last name helped you?

ISHANA There are certain expectations the last name brings. But I love that, because it’s something for me to knock down. Hopefully, I put my own artistic stamp on what I create. Of course there are benefits. I was lucky to be born into a life where I have the resources to make what I want to make, something that not all women of color have.

Are the creative satisfactions of making film and television similar?

M. NIGHT In film, you have two hours to start a story and make the audience fluent in the language and take them and land them in a satisfying way and feel resolved. Television is in long form, and it’s a lot of material to deliver year after year at the highest level as your writers change. It’s complicated and open ended. The open endedness keeps you coming back, but you also have to close it. Sometimes you’re not sure that you’re going to finish the story. I’m optimistic we’ll get the fourth season of “Servant” that I want.

Ishana, how was your experience on set?

ISHANA A large part of my fear in coming in to direct the third episode was that I had never seen a female director work. I would literally look up YouTube videos of women directing on set to see how they worked, so I could visualize that.

When I came onto the “Servant” team, there were three women already on board as directors. They let me watch as they directed, and I even shadowed them on other productions. I can’t express how transformative it was. I think as a young female trying to jump into the industry, it’s important to see models of what you aspire towards, to know your aspirations are attainable.

M. Night, your newest film, “Old,” is set to debut in July. What can you tell us about it?

M. NIGHT What I can say is it came from a book that Ishana and my other daughters gave me for Father’s Day. It’s an obscure graphic novel [“Sandcastle” by Pierre Oscar Levy and Frederik Peeters]. This book gave me the opportunity to work through things like my parents’ getting older, and how I have a photo of Ishana on my lap during “Unbreakable” and now she’s standing next to me on set. That’s what the movie is about.

One last thing about “Servant”: In Friday’s episode, a pizza restaurant called Cheezus Crust plays a crucial role. I would totally order from Cheezus Crust.

ISHANA We had a wonderful chef [on set] from Philadelphia — Chef Drew [DiTomo] — and he’s passionate about experimentation. It helped that we had this big pizza oven. There were days when you’d see all the producers come on set and ask what’s going on. [Laughs.]

M. NIGHT We need to do another pizza episode.

If You See Someone Not Wearing a Mask, Do You Say Something?

30 Products To Help Recreate The Fun Of Decorating Your Locker, But At Your Desk