Home » Entertainment » The T List: What to Know About, Wear and See This Week

Welcome to the T List, a newsletter from the editors of T Magazine. Each week, we’re sharing five things we are eating, wearing, listening to or coveting now. We hope you’ll join us for the ride. (Sign up here, if you haven’t already, and you can reach us at [email protected].)

Fuzzy Pullovers That Are Perfect for Sweater Weather 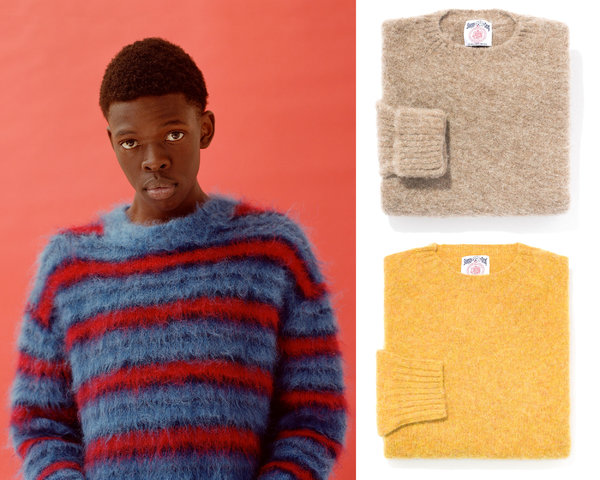 There’s something totally enticing about fuzzy sweaters — their playful, Muppet-like plushness almost encourages you to reach out and pet them. And so it was a true test of my self control when, earlier in the year, I saw the brightly colored riffs on grungy mohair cardigans and pullovers at Marni’s fall 2019 show. Now that sweater weather has arrived, I can finally channel a young Björk (circa 1993) and throw on a furry knit of my own. Marni’s psychedelic striped version is a bold (if costly) option, while both Acne Studios and Our Legacy sell nubby sweaters in more muted colors. But J. Press’s Shaggy Dog crew necks are not only made from brushed Shetland wool in a variety of shades — from oatmeal to vermilion — they also come with slightly softer price tags. For more options, visit tmagazine.com.

Australia’s Eurobodalla, Shoalhaven and Sapphire coasts run about 250 miles from the dairy town of Berry — two hours south of Sydney via the Grand Pacific Drive — down to a historic whaling center near the Victorian state border. In the mountains above are sites sacred to the Yuin and Ngarigo peoples, who have lived in the southeastern part of what is now known as New South Wales for as long as 60,000 years, as well as a half-dozen bird-rich national parks. Known for an abundance of bushland and sandy beaches, the area has become recognized for its food. On the more formal end of the spectrum is the British chef Rick Stein, who arrived in the New South Wales town of Mollymook in 2009 to take over the restaurant at Bannisters by the Sea, a small hotel that soon became a global destination. Stein’s success there has since spurred a wider culinary awakening and an attendant restaurant scene. For ideas on where to stay, eat and shop, see tmagazine.com.

Everyday Cups From a Pair of Glassware Artists

I first discovered the Japanese glassware artists Baku Takahashi and Tomoko Wada at Playmountain, a fantastic design store in Tokyo’s Harajuku district, and subsequently wrote about their practice for T last year. I’ve since been lusting after the couple’s Toumei line of practical housewares — starting with their Pal cups, which are squat (about 3 inches tall) and crisp-lined, the glass blown thin and smooth. Among my North Brooklyn cohort, dinner-party aesthetics have in recent years tended toward the clean and spare (rumpled linen tablecloths, white plates, nondescript stemware), so I love the idea of switching that up and buying one of these in each color to offer as water or wine glasses among friends, or even just to sip from when I wake up in the middle of the night. As the artisans explain on their website, “the name ‘pal’ means friend, [so] it was created with the aim of being familiar and usable.” About $26 each, toumei-glass.com.

An Underwear Line From Hollywood Stylists

The Los Angeles-based stylists Jamie Mizrahi and Simone Harouche are used to creatively solving problems for their celebrity clients. After years of dressing women of different body types (their roster has included Miley Cyrus, Katy Perry and Kim Kardashian), they had become experts at engineering emergency undergarments out of materials in their styling kits. So they decided to launch their own line of what Mizrahi calls the “solution-based essentials that women need.” This week, they introduced the Kit, a line of underwear that is so simple and comfortable it’s hard to believe it didn’t already exist. Their initial offering includes bras — from a molded, plunging style to an underwire triangle version — as well as underwear, like high-waisted briefs and thongs, all available in seven colors (neutrals, plus red, blue and black). There are also accessories like pasties and tape for securing garments to the body, as well as prepackaged kits, including one to help women prepare for black-tie events. thekitundergarments.com.

Contemporary Art in the Comfort of One’s Own Hotel

For me, the worst part about spending time in Paris, if there is one, is the guilt I experience as I loaf around my temporary quarters (because of jet lag and unrelated, persistent sloth) when I should be checking out the latest exhibitions at any of the city’s many museums and galleries. But the Peninsula, a sprawling five-star hotel near the Arc de Triomphe, has brought contemporary artwork almost to guests’ doorsteps with its traveling Art in Resonance program, curated by Bettina Prentice and Isolde Brielmaier and newly launched in the French capital. The first exhibition includes a kaleidoscopic projection piece by the Japan-born, New York-based Saya Woolfalk; an undulating sculpture by the French artist Elise Morin, made from pulverized compact discs; and the Chile-born, New York-based Iván Navarro’s neon light installation “Home.” The works are on view through Nov. 15, when Art in Resonance will pack up and head to its next stop, the Peninsula Tokyo — just in time for cherry blossom season. 19 Avenue Kléber, Paris, peninsula.com.

With a Swish and a Flick, You Can Pick Up These 100 Harry Potter Gifts For $25 and Less!