Home » Entertainment » Tickling the Ear With Sounds That Are Almost Tangible

TROY, N.Y. — Natasha Barrett’s introduction to classical music was not unduly peculiar. She can still recall her father’s collection of vintage vinyl, her love for Debussy albums.

She also remembers wanting to be a composer from an early age. But she didn’t live long in the past. As synthesizers became more common through the 1980s, a teenage Ms. Barrett began playing them. She also experimented with multitrack recordings.

“I just thought this was fun, because I could make funny sounds,” she said before a concert of her works last week at Empac, the experimental media and performing arts center here at Rensselaer Polytechnic Institute. “I didn’t think of this as being music. And I hadn’t really heard any contemporary music at this stage.” 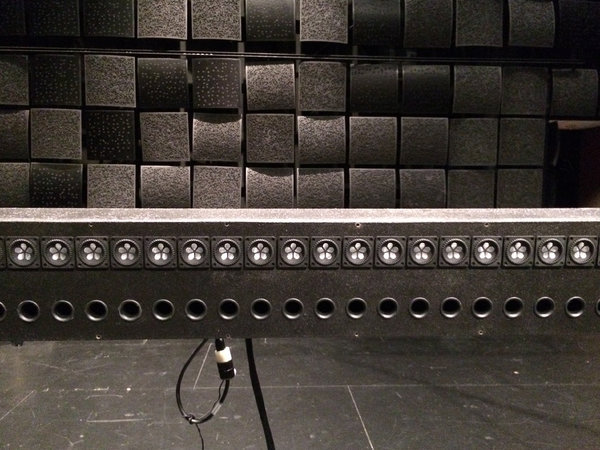 When she reached City, University of London, she found a music department that had embraced more than the standard repertoire. Her degree there, she said, “combined conventional music study with music technology, psychoacoustics.”

“And it was presented in a way that was very musical,” she added. “It allowed you to understand this and embrace it as an artistic subject, and not just as a technological subject.”

Thanks in part to that early training, Ms. Barrett is now one of the leading composers in the emerging field of 3D audio: using high-density loudspeaker arrays (think movie-theater surround sound on steroids) and cutting-edge recording and mixing procedures to create works full of ingenuity and drama.

The technology behind some of her methods might be a challenge to picture, but the sonic results contain easy pleasures — as with the range of timbres and steady build of intensity in “Sagittarius A*” for violin, multichannel electroacoustic sound and live electronics.

A few of Ms. Barrett’s electronic pieces without live performers, including one recorded from inside a balloon, were presented at Empac’s first spatial-audio seminar in 2017. At last week’s edition of the seminar, there was a concert of her so-called ambisonic pieces on Friday. The night before, she screened “Pockets of Space,” a short 3D film made with the digital artists Marc Downie and Paul Kaiser.

As the often abstract visuals of “Pockets of Space” transform from febrile, subatomic squiggles to more recognizable depictions of a tree, so, too, does Ms. Barrett’s score evolve — with initial, dry tendrils of percussive sound steadily giving way to more resonant passages, suggestive of prepared piano.

Originally commissioned by Ircam, the French electronic-music institute, “Pockets of Space” also exists in a virtual-reality version. After strapping on Oculus goggles and headphones, a viewer can choose where to gaze inside the digital environment.

At one point, during my second trip through the VR edition, I tilted my head to allow an approaching cloud of red dots to pass over my face. As I did, a slow-rolling pattern of Ms. Barrett’s tones — sounding like a great many packing bubbles being popped in sensuous slow motion — seemed to approach and wash over my head, too. This synchronization of perspective, across audio and visuals, was made possible by the fact that both elements of the film were being rendered anew by a computer in real time, based on the tilt of the goggles on my head.

“I’m really concerned with the idea of tangibility,” Ms. Barrett said during our conversation, shortly after I removed the goggles. “Sound is invisible, but we can do things that make you want to reach out and touch it.”

One of her tools is binaural recording, which uses multiple microphones inside a dummy head that is designed to be generically reflective of human auditory processes. It places the listener, Ms. Barrett said, “more ‘into’ the space of the sound,” instead of being merely sandwiched between left and right channels.

Given differences between actual heads, a binaural recording won’t sound the same — or produce the same spatial effects — for different listeners. And it pales in comparison to hearing the spatial separation of high-order ambisonics, like at Empac. But they give a feel for the sense of immersion those speaker arrays can offer.

In a dramatic, windswept section of a piece like “Involuntary Expression,” Ms. Barrett’s binaural version for headphones sounded, to my ears, as though it kept pulling my head between minute gradations of sonic balance; the stereo edition, by comparison, sounded like a series of more discrete, back-and-forth handoffs between the halves of my headphones.

Neither recording offered quite the same experience as hearing Ms. Barrett’s work played over a 71-channel system at Empac. But for such “acousmatic” pieces, she said she was hopeful that technological advances would steadily creep into our living spaces, as consumer technology embraces ambisonics.

Likening it to the jump from mono recording to stereo, she said that “adding the full dimensionality of the sound is that last phase of making it beautiful, making it real.”

“It’s all about being there, and about getting closer to our perceptual limitation,” she added. “And space is a very important part of that.”