Even though time away from his family reportedly lead his ultra-public divorce with Gisele Bündchen, Tom Brady is proving he’s still a great dad!

On Wednesday Nov 23, right before Thanksgiving, Brady shared some heartfelt pictures of his daughter Vivian, 9, and his 15-year-old son, John “Jack” Edward. In a touching Instagram story, the Tampa Bay Buccaneers quarterback posted a picture of his little girl on horseback wearing a riding helmet and gloves. He wrote on the photo, “My Baby ❤️❤️❤️.” So sweet!

As for his tribute to his eldest son, which he shares with actress Bridget Moynahan, Brady shared a series of Instagram stories and a gallery of pictures of Jack making an appearance at a Buccaneers practice.

In the first image, Jack appears to be talking in a huddle with fellow Buccaneers players. On top, Brady wrote “My ❤️.” In another pic of him in the huddle, Brady proudly wrote, “Just one of the boys.” In another snap, Jack seems ready to follow his dad’s footsteps as he’s seen running with the ball. “Fire that pigskin!!!” Brady wrote.

In the carousel, Brady posted a similar shot of Jack in practice writing in the caption, “My Inspiration ❤️.”

The sweet tributes from Brady come after he expressed his gratitude for his family in this week’s episode of his SiriusXM podcast, Let’s Go! with Tom Brady, Larry Fitzgerald and Jim Gray. In the episode, the father of three said, “Thanksgiving, it’s always time for family. When you think about this holiday and the commitment that parents make, and that my parents made to me and my career, [it] is unbelievable. You know what I mean?” 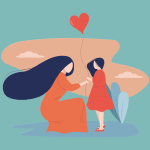 
Celebrate Thanksgiving by Teaching Kids the Power of Gratitude

He continued, “It’s just, I’m here in my 23rd season, looking forward to finishing strong here after Thanksgiving, and obviously with a lot of gratitude for the people that have made such a huge impact in my life and supported me throughout this amazing career. And, you know, I just want to be that for my kids. I just wanna be the best dad I could be.” With all the love he’s sharing on socials, and the time they’re all spending together, we think he’s doing just that!

Before you go, click here to see all the celebrities who have opened up about the struggles of co-parenting.