AMSTERDAM — Many know Ulay as the man who walked into Marina Abramovic’s performance “The Artist is Present” at the Museum of Modern Art a decade ago, and brought her to tears. That two-minute encounter between the former collaborators and lovers during her three-month sit-in at the New York museum has been viewed more than 18 million times on YouTube.

Ulay, who met Ms. Abramovic in 1974, was her most important collaborator, and the two worked and lived together for a dozen years. Or, as she put it in an interview, “He was the big love story in my life.” 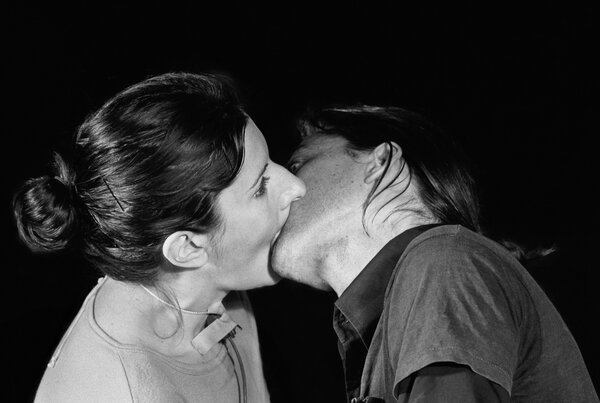 But Ulay, who was a conceptual photographer and a performance artist before and after his work with Ms. Abramovic, had a powerful oeuvre of his own, as a sprawling retrospective at the Stedelijk Museum in Amsterdam attests.

A recent coronavirus lockdown in the Netherlands has forced the museum to close until at least Jan. 20, but the show, “Ulay Was Here,” is scheduled to run through April 18, and could be extended, a spokeswoman for the Stedelijk said.

The exhibition was organized in consultation with Ulay as he was dying from lymphatic cancer last year and in the first months of 2020, his widow, Lena Pislak, said in a telephone interview from their home in Ljubljana, Slovenia. “Till the last, we were working,” she said. “He was really enjoying the process.”

Ulay died in March, at age 76, and Ms. Pislak said that she and Hana Ostan Ozbolt, the director of the Ulay Foundation, worked with the Stedelijk to finish the show. “It was a good healing process for us,” Ms. Pislak said. “He would have been so proud.”

The story of Ms. Abramovic and Ulay is a rare case in art history in which a female artist vastly eclipses her male counterpart. Today, Ms. Abramovic is world famous, while Ulay is little known. That leaves many with the impression that Ulay was only a subsidiary figure in her world.

“That’s a picture we wanted to correct,” said Hripsime Visser, a photography curator at the Stedelijk, who oversaw the exhibition of about 200 artworks. “That period of 12 years was really a collaboration between the two of them, but all the themes that were developed with Marina were themes he was already working with before he knew her.”

Born Frank Uwe Laysiepen in Germany during World War II, Ulay struggled with his identity as a German, and a man. He moved to Amsterdam in 1969, to find a more countercultural, experimental atmosphere, where he could walk the streets in half-drag — feminine on one side, masculine on the other — and create gender-bending self-portraits.

“There were different scenes here that he couldn’t find in provincial Germany, where he grew up,” said Rein Wolfs, the Stedelijk’s director. “He found the queer scene, the trans scene, scenes asking identity questions about ‘Who am I?’ This is what you see very much reflected in his early work.”

His primary medium was photography, and his tool was a Polaroid camera, Ms. Visser explained. He explored ideas using the instant camera, making composites of Polaroid images out of male and female body parts to create hermaphroditic characters.

He found a home base for his experimental work at De Appel, a contemporary art center in Amsterdam, becoming “one of the driving forces when it came to promoting performance art and time-based media,” Mr. Wolfs said.

It was through De Appel that Ulay met Marina Abramovic on Nov. 30, 1974, which happened to be their shared birthday. He picked her up at the airport to drive her to the gallery, where she presented a performance in which, naked, she cut the shape of a star into her stomach.

They immediately recognized each other as kindred spirits, Ms. Abramovic said.

“He finds his female side in her, so he no longer needs to question his own female side,” Ms. Visser explained.

Their work together was often centered on the interdependency and tension of intimate relationships. Ms. Abramovic said that the piece that best represented their romance and collaboration was “Rest Energy,” from 1980. In that piece, Ulay holds a bow and arrow aimed at Ms. Abramovic’s heart; microphones pasted to both their chests allow the audience to hear their increasingly rapid heartbeats.

“This piece is the shortest piece we ever did, 4 minutes and 20 seconds,” she said. “It seemed like a lifetime. This is a very symbolic work for us, based on total trust. What’s important in this piece is the tension. You can only do this work with total love and trust.”

Ms. Abramovic described their period of working together as “nine years of incredible love and happiness, and three years that were very difficult.” They finished it, in their signature performative way, with a three-month performance art work on the Great Wall of China, walking toward each other from opposite ends of the 13,000-mile structure. When they met in the middle, they broke up.

“Ulay Was Here,” includes a scenic 15-minute excerpt from the end of the hour long video they made to document the journey, “The Lovers: The Great Wall Walk,” closing the three-room section devoted to their collaboration. The next room starts with works from two years later, when Ulay returned to making solo work after a career pause.

In the early 1990s, Ulay returned to photographic work, to produce what he called “photograms.” For these, he would turn a gallery space into a kind of dark room, place a piece of photosensitive paper on the floor, ask subjects to lie on the paper, and then briefly flood the room with light.

His 2012 “Sweet Water Salt Water” is a series of Polaroids of own bodily fluids, like tears and sweat, in drinking glasses. He collected them while he was undergoing treatment for lymphatic cancer, which he learned he had in 2011.

Ulay briefly recovered from cancer, Ms. Pislak said, and continued to work for a year, but then had a relapse. His final piece, “Performing Light,” presented at the Richard Saltoun gallery in London in 2019, is represented by a black-and-white “photogram” of his own frail body that ends the show.

Ms. Visser said that previous retrospectives of Ulay’s work have focused either on the collaborative period with Ms. Abramovic or exclusively on Ulay’s solo work. “I tried to show the whole picture; to give the period with Marina the attention it deserves — which is so important for art history and performance,” Ms. Visser said. “But I hope that by showing all the other works we can show a more complex, even picture of who Ulay was.”

Although Ms. Abramovic and Ulay struggled over the years, including in a lawsuit over rights and royalties from their collaborative work, they were on good terms by the end, Ms. Abramovic said. The last time they spoke, she added, was on their shared birthday, Nov. 30, a few months before he died.

90 Day Fiance’s David Likes Big Ed 'as a Person,' But Gets Creeped Out