100%: JULIAN EDELMAN (2019) 9 p.m. on Showtime. “I’m emotionally pooped, mentally and physically pooped,” the New England Patriots wide receiver Julian Edelman told The Times earlier this year, after the Patriots defeated the Los Angeles Rams in Super Bowl LIII. The fatigue was not surprising. The victory was the end of a road to recovery that had begun over a year before, when Edelman sustained a serious knee injury. That road — and Edelman’s rise to stardom — is the subject of this documentary, which features interviews with Edelman’s fellow Patriot Tom Brady, Edelman’s father, and figures like Mark Wahlberg and Snoop Dogg. 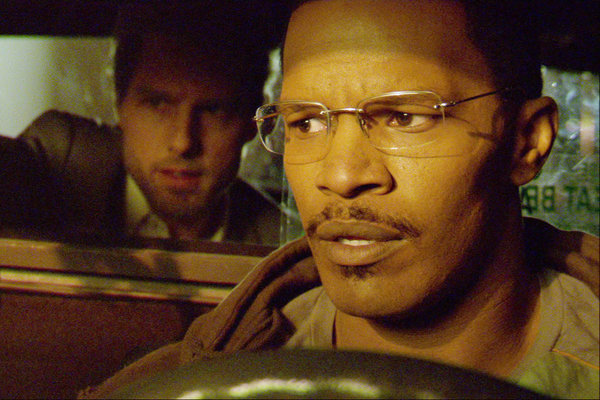 COLLATERAL (2004) 10:40 p.m. on HBO Signature. Jamie Foxx earned two Academy Award nominations for performances in 2004, one for his starring role in the Ray Charles biopic “Ray” and another for his role as a cabdriver named Max in this Michael Mann thriller. (He ended up winning for “Ray.”) Late into the Los Angeles night, Max picks up Vincent, played by Tom Cruise, who offers Max big money to drive him around the city. Vincent, it turns out, is a killer for hire — as becomes evident when a body comes crashing down onto Max’s cab, and it is made clear that Max has unwittingly been hired to escort Vincent between hits. Nightclub brawls and pursuits follow. In her review for The New York Times, Manohla Dargis wrote that, despite the action-movie premise and trappings, the story has depth, and reveals itself to be “a portrait of radically different souls clinging to radically different paths.”

PARIS IS BURNING (1991) Stream on Netflix. Jennie Livingston’s influential documentary featured 1980s New York drag ballroom culture and helped lay the groundwork for shows like “RuPaul’s Drag Race” and “Pose.” Stream it, or better yet see the new restoration, which is currently at Film Forum in New York. “I stepped into a community where people were geniuses at becoming themselves,” Livingston told The Times recently, “geniuses at using words and far beyond brilliant at using dance forms to express themselves.”

SGT. PEPPER’S LONELY HEARTS CLUB BAND (1978) Rent on Amazon, Google Play, iTunes, Vudu and YouTube. In “Yesterday,” the new movie from Danny Boyle, an English singer-songwriter discovers that he’s living in a world where nobody remembers that the Beatles existed. “Sgt. Pepper’s Lonely Hearts Club Band,” the much-maligned musical comedy with covers of songs by the Fab Four, is a movie that many might be happy to forget existed. (In her review for The Times, Janet Maslin concluded that “watching it feels like playing shuffleboard at the absolute insistence of a bossy shipboard social director.”) But it’s also one that younger fans who have already seen “A Hard Day’s Night,” “Help!” and “Yellow Submarine” might not be familiar with. And there’s at least some fun to be had here: “Yesterday” might have Ed Sheeran playing a version of himself, but only “Sgt. Pepper’s” has Alice Cooper playing a cult leader.

Coronavirus: Rocker Bruce Springsteen the latest celebrity to get his hair cut at home