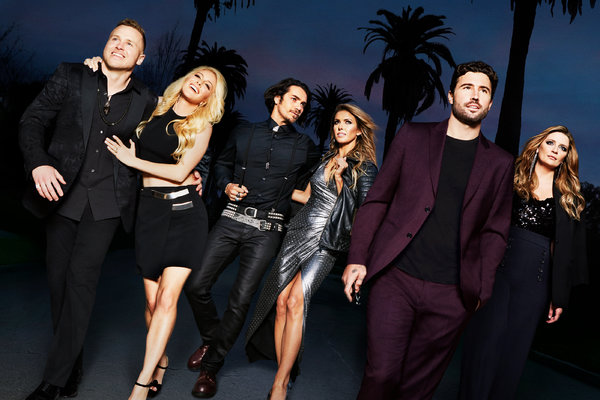 THE HILLS: NEW BEGINNINGS 10 p.m. on MTV. More than 10 years have passed since “The Hills,” a “Laguna Beach” spinoff, helped make Lauren Conrad, Heidi Montag, Whitney Port, Audrina Patridge and Spencer Pratt household names. The reality show followed the gang around Los Angeles where they “learned to live on camera” and eventually “became ‘brands,’” Irina Aleksander wrote in The New York Times Magazine. “The show itself marked the dawn of the sort of glossy programming that would later subsume networks like E! and Bravo.” Now, much of the original cast is reuniting for “New Beginnings," including Brody Jenner, a satellite member of the Kardashian clan, as well as newcomers Brandon Thomas Lee, the eldest son of Pamela Anderson and Tommy Lee, and Mischa Barton, a star of the scripted series “The O.C.” Much like MTV’s “Jersey Shore” reboot, the show focuses on how its cast members are navigating marriage, sobriety and fame.

YEARS AND YEARS 9 p.m. on HBO; Stream on HBO platforms. This limited series stars Emma Thompson as a Trumpian political figure, whose polarizing opinions (like requiring an I.Q. test to vote) leave Britain divided in an alternate 2019. Across six episodes, the series follows one Manchester family over the subsequent 15 years, exploring how they react to the political turmoil, new technological advancements and economic changes. Created by Russell T Davies, the writer behind “Queer as Folk,” “A Very English Scandal” and the David Tennant “Doctor Who” years, the series might conjure comparisons to “This Is Us,” mixed with dystopian elements of “Black Mirror.”

DARK Stream on Netflix. The first season of this German psychological thriller opens as a murder mystery and evolves into a full-blown time-travel epic. When a high schooler discovers that a young boy hasn’t just gone missing, but has actually traveled back in time, he uncovers a mystery that reaches back generations, and ultimately affects the fate of everyone in his small town. The series sends its characters traveling between three different coordinates in time — where they meet their ancestors as well as stumble across their future selves — and poses mind-bending theories of how one small act can change the course of human history. The second season picks up sometime in the future, after what appears to be an accident at the town’s nuclear power plant. It’s a perfect show for fans of “Stranger Things,” “Chernobyl” and European crime thrillers like “Broadchurch.”

JULIET, NAKED (2018) Stream on Amazon and Hulu; Purchase on Amazon, Google Play and YouTube. This romantic comedy, based on a Nick Hornby novel, centers on an incredible love triangle: a music superfan, his girlfriend and his idol. Chris O’Dowd plays the oblivious boyfriend to Annie (Rose Byrne), and runs an obsessive fan site for the ’90s rocker Tucker Crowe (Ethan Hawke). When Annie posts a negative review of a bootleg Crowe CD online, the musician emerges from obscurity to respond. The two strike up an intercontinental email correspondence that leads to an in-person flirtation when the musician winds up in the couple’s coastal English town.

The OG Is Out! Vicki Gunvalson Is Leaving ‘RHOC’ After 14 Seasons