Home » Entertainment » ‘Yellow’ Is a Play That Looks Great on Film. What Will It Be Like Onstage?

A year ago, filming was hardly a priority for most theater companies. Luk Perceval’s “Sorrows of Belgium” trilogy, commissioned by the Belgian company NTGent, shows how fast the business has adapted. In 2019, the first installment, “Black,” was recorded only for archival purposes; the second, “Yellow,” premiered this month in an eye-catching version designed primarily for the screen.

It was a pragmatic decision in Belgium. As in many countries, theaters have been shut since a second wave of Covid-19 hit in October, with no reopening date in sight. A group of arts workers and venues called Still Standing for Culture has ramped up protests; on March 13, it marked the anniversary of the first Belgian lockdown with around 250 symbolic performances and marches.

The film version of “Yellow” may have been born out of necessity, but it offers a fascinating blend of theater and cinematography and sheds light on a chapter in Belgian history that most foreign viewers would be unfamiliar with. Having delved into the atrocities in Congo under Belgian colonial rule in “Black,” Perceval focuses here on Flemish collaboration with the Nazi regime before and during the Second World War. (The final production in the trilogy, “Red,” is planned for next season and will tackle the terrorist attacks that shocked the country in 2016.)

“Yellow” is still tentatively scheduled for a stage run at NTGent in May, and is supposed to travel to the Landestheater Niederösterreich in Austria in the fall. According to a spokesman for NTGent, Perceval, one of Belgium’s best-known directors, wanted the film to be “as different as possible” from what audiences would eventually see in the theater.

That goal has undoubtedly been achieved. As I watched “Yellow,” I kept wondering how certain transitions, involving cuts between scenes in different parts of NTGent’s building, would translate onstage. The filmmaker Daniel Demoustier also leaned into a period aesthetic by shooting “Yellow” almost entirely in black-and-white, and the camera hovers near the characters’ faces as fascist slogans worm their way into their psyches.

The production is based on a new play by the Belgian-born writer and director Peter van Kraaij, interspersed with speeches and other historical material. Its choral structure and allusiveness require a little work from the audience early on, but the characters soon fall into place. The main story line revolves around a fictional Flemish family of Nazi sympathizers. The son, Jef, leaves for war on the eastern front and sends letters home; his sister, Mie, wishes she could join him and enters into a correspondence with another soldier, Aloysius. 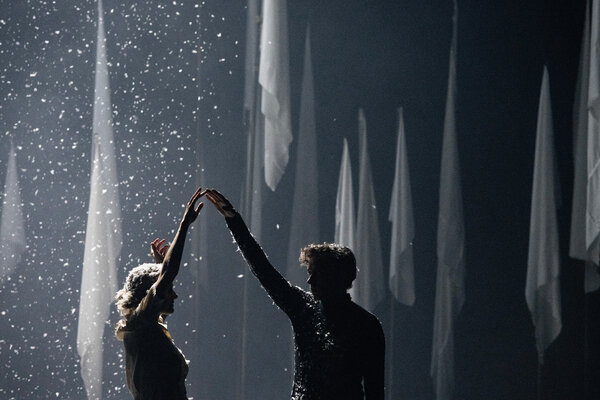 The family’s father, Staf, clashes with his brother Hubert, who opposes the German occupation and hides a young Jewish woman, Channa. Her story — told to Hubert rather than explored in depth — feels a little like a token in the larger arc of the production. The link between Nazi collaborators and the Holocaust seems obvious enough without it. Then again, that may be an optimistic view.

“Yellow” eloquently charts the rise of Rex, a far-right Belgian party that advocated collaboration during the German occupation and encouraged men to enlist for war. Its founder, Léon Degrelle (played by Valéry Warnotte), makes appearances and voices his admiration for Hitler alongside Otto Skorzeny, an Austrian SS officer.

Perceval’s depiction of collaborationists left me with mixed feelings. The film’s many close-ups bring out a sense of disconnect in the main characters, their eyes glazed over yet betraying a chilling inner fire; Hubert and Channa, on the other hand, are empathetic even in moments of despair. The contrast is visually effective, but it also positions fascists promoting murder as delusional rather than fully rational — a complex debate that occurs again and again when it comes to extremism.

The choreographed scenes peppered throughout “Yellow” reinforce that impression. The actors often dance to heavy drums on and around a large table designed by Annette Kurz, in a state of trance; in one instance, an actor shouts war statistics into the camera as the others writhe. It brought to mind the troubled legacy of German modern dance, which favored choral group numbers. Some of that movement’s choreographers ended up collaborating with the Nazi regime, too, and contributing sweeping tableaux to its propaganda.

The cast is faultless: Lien Wildemeersch (as Mie) and Peter Seynaeve (who plays the father), especially, hold one’s attention in every scene. Under the circumstances, “Yellow,” which will be shown again for 48 hours beginning Friday, is a stunning achievement; I’d like to see how live performance recalibrates the audience’s perception of it.

NTGent isn’t the only Belgian theater looking for virtual ways to salvage the season. Several are in the process of building online platforms, including the Brussels-based KVS. On KVS 24/7, it will stream the premiere of the French-language production “The One (et Demi) Man Show” from Thursday through Sunday.

The Théâtre de Liège, in the French-speaking region of Wallonia, started an app in February and has already shown Ismaël Saidi’s “Muhammad,” a new one-man show about the Islamic prophet. In late April, its Émulation festival for emerging artists will also be available to watch online.

Still, the most creative local response to the circumstances belongs to the Théâtre l’Improviste, in Brussels. This venue dedicated to improvisation has opted to translate its craft to YouTube, with a little help from the audience.

Two weekly live shows, “Visio” and “#Hashtag,” bring actors together for online comedy sessions in French. Viewers determine the premise of the improvisation via YouTube’s chat feature. On a recent Sunday, for “Visio,” I joined a dozen attendees who determined that the actor Patrick Spadrille would play a character in the Seychelles; that the second performer, Ron Wisnia, would be one of his employees; and that Spadrille, tired of his tropical getaway from the pandemic, would look for an excuse to return to Belgium.

The chat feature is turned off during the hourlong show so the actors can perform uninterrupted. Their exchange strayed from the initial rules, as always with improvisation, but Spadrille and Wisnia were seamlessly reactive as a roguish fraudster and his seemingly gullible right-hand man.

The cast for “Visio” and “#Hashtag” changes every week, with actors tuning in from Belgium, France, the United States and Canada. As with “Yellow,” the benefits for viewers at home are real: Each production offers a window onto Belgium’s creative scene.

It’s tempting to think of this as a silver lining in the pandemic, but given the scale of damage reported by the Belgian culture sector, that would probably be a step too far. It is better than nothing, but in the meantime, stages remain dark.

Juice WRLD's Second Posthumous Album Will Release as a Trilogy