Home » 141,000 new apprentices but Labor doubts how many more will sign up

Labor is casting doubt on how many young Australians the federal government can entice into apprenticeships, with new data showing there are 150,000 fewer apprentices than when the Coalition took power.

But the government says it is the only side with a proper plan for training, as Prime Minister Scott Morrison focuses on skills and jobs during a Queensland budget tour. 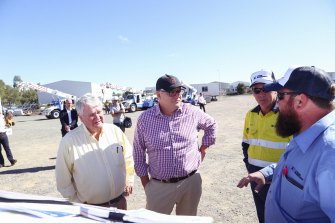 New figures from the Department of Education, Skills and Employment show in September last year, there were 42,614 fewer apprentices in NSW than in 2013, a drop of more than 33 per cent. In Victoria, numbers were down almost 40 per cent with 38,883 fewer apprentices.

Separate data from the National Centre for Vocational Education Research shows the numbers of people starting and completing apprenticeships reached an all-time high in 2013 and have dropped every year since.

In last Tuesday’s budget, the government extended its wage subsidy scheme to boost apprenticeship commencements, with $2.7 billion to allow it to run for an extra year, to March 2022, and uncap the number of places.

The budget papers say it expects this to add 170,000 more apprentices to the 100,000 predicted would start when the scheme began last October.

Government figures show 53,886 employers with 141,431 apprentices have registered for the scheme since October.

“After years of funding cuts to the sector and fewer apprentices, Scott Morrison is now telling Australians they should believe he will now more than double the national total in 18 months,” he said.

“The same government which has set themselves a March deadline to deliver 270,000 apprentices are the same lot that could only manage to deliver 1000 jobs out of the 450,000 they promised from only a couple of months ago.”

Employment Minister Stuart Robert said the government had protected jobs at the height of the pandemic, including through a similar wage subsidy for people already in apprenticeships.

“It is the Morrison government who supported over 141,000 apprentices through direct wage subsidies, with the federal budget outlining support for a further 170,000 new apprenticeships and trainees,” he said.

Mr Morrison is travelling in Queensland for part of this week and focusing on jobs.

On Sunday, he met apprentices in Gladstone who are constructing a new radar tower for the Bureau of Meteorology.

“It’s great to see the investment in skills and training leading to the workforce being available for firms like Xtreme Engineering to be able to take on these jobs,” he said.

What to wear this weekend: FEMAIL picks out the best jumpsuits