Home » Lifestyle » A ‘temple for women’ is being built in Melbourne. In sequins. From LA.

There's Porky the giant octopus. There's a lady statue with a watermelon on her head. There's a room wallpapered from floor to ceiling with photos of flowers, sitting behind colonial art.

And in the middle of the NGV, past corridors of scurrying curators putting together one of the city's biggest-ever exhibitions, a temple to women is being built. From sequins. From Los Angeles.

House of Heroines is being created on site, from instructions by LA artist Lara Schnitger. Credit:Jason South

House of Heroines, an installation by Dutch-American artist Lara Schnitger, is likely to be a conversation starter when the NGV Triennial opens later this month. You enter a large, calm, rectangular space, enveloped by warm sequinned panels. Sketched outlines of women, made by brushing the fabric into patterns, are reminiscent of Egyptian hieroglyphs or a Greek frieze.

It's all pretty fabulous. Then you notice the details: slogans like Do Not Let the Boys Win. Lick My Legs. My Other Car is a Broom. A Dress is Not a Yess.

"There's a lot of female empowerment here," says Schnitger, over the phone from LA. "I wanted to make the room like, if you step into this temple as a woman you feel really celebrated and respected. There is a very positive energy, a proudness of who you are." 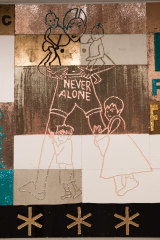 Schnitger's art, says the NGV media kit, aims to "explore the boundaries of socially accepted femininity and the aspects of this regarded as obscene or taboo". The slogans were created for Suffragette City, in which women paraded her sculptures through LA in a street performance-cum-protest march.

But Schnitger doesn't want to come across angry – rather she hopes it will be "a lot of joy, and fun, and a little different".

Donna Zuckerberg, a classics scholar (and sister of Facebook's founder), was invited to write about the piece for the exhibition's official book and rued the "loss of the social experience of art" in the pandemic. She quoted an ancient Greek line: "Salvation is in the hands of women". Schnitger's work is part of a movement that transforms female solidarity and sexuality into political power.

But Schnitger's hands are idle. Usually she would be in the room, responding to the space as the artwork came to life. Instead she had to photograph it in LA then ship the material to Melbourne, where curators projected her images over the panels and recreated it.

"I do feel it's my hands, I'm there, if somebody is following my direction I do feel I'm really present in the work," says Schnitger. "But I also mentioned to the installer to have fun with it, and feel your own vibe with it." 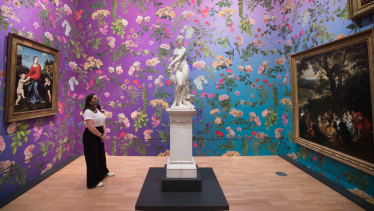 The installer, Nadya Sinyutina, was indeed having fun – it was a "meditative experience" tracing over Schnitger's projections, she said.

But the artist would much rather be there.

"As an artist you're already lonely, in the studio," she says. "I made this with almost no assistance – there are a lot of lockdowns in LA and you're very lonely. An exhibition is usually a moment to step out into the light and meet some people. Then you can go back in your cave.

"But now you're all the time in the cave."

The NGV Triennial runs from December 19 to April 18.

What will schools look like when children go back in September?