A woman who went for a routine leg wax has recalled her horror after the beautician spilled hot wax on her legs, leaving her with severe burns and struggling to walk.

Badesim Kubak, who is living in New York, shared a video to TikTok where she can be heard explaining how she went for a wax in her home country, Turkey when she was 15-years-old.

Speaking to her social media followers, she went on to say how she opted against shaving, which she claims is ‘frowned upon in my country.’

In the clip, titled  ‘soooo yeah that is my story…,’ which has received over 2.1 million views, Badesim details her story step-by-step through text, while acting out the scenario in the background. 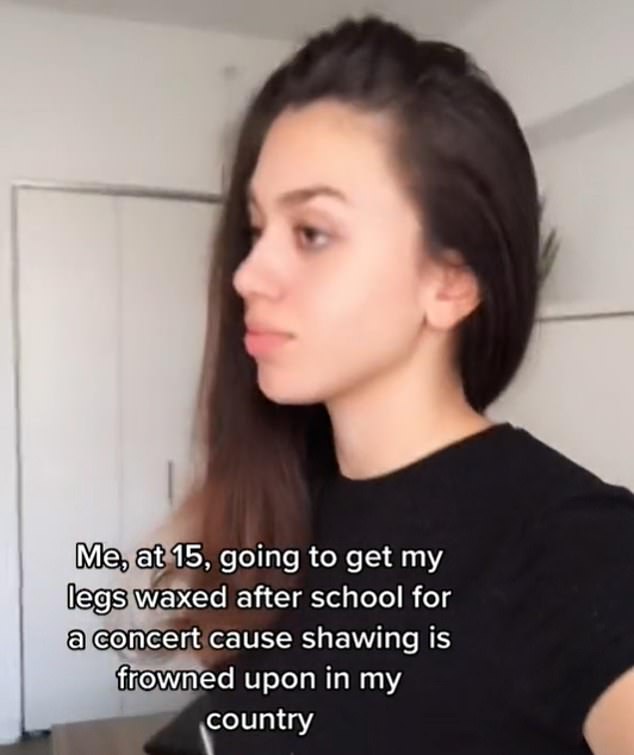 In a TikTok video that now has over 2.1 million views, Badesim Kubak, who is living in New York, explained how she was left with severe burns after a beautician spilled hot wax all over her legs

At the start of the short clip, she penned: ‘Me, at 15, going to get my legs waxed after school for a concert.’

‘Starting the waxing with my legs, it’s painful but I can take it.’

‘While the lady is applying wax to my inner thighs, the lid of the applicator comes off and boiling wax spills all over between my legs.’

Revealing that it missed her vagina by only a few inches, Badesim recalled how she started screaming and crying from the excruciating pain. 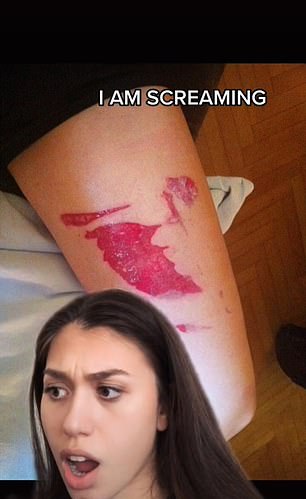 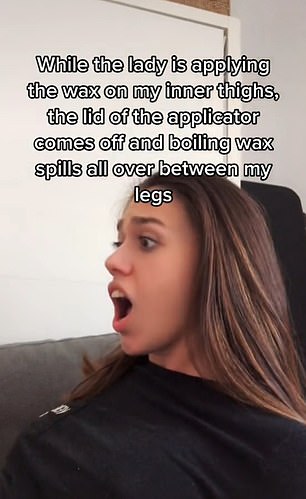 Badesim (pictured, left and right) shared the full extent of her burns and claimed the technician told her it wasn’t a ‘big deal’

But rather than consoling her, Badesim claimed the waxing technician accused her of ‘making a big deal’ out of it and reassured her that everything was fine.

Not wanting to cause trouble, the 15-year-old obliged, forced herself to stay quiet and tried to keep going through the pain.

‘She rips the wax off me to stop it from burning my skin, while telling me it is seriously nothing,’ she continued.

‘She puts MOISTURISER and PAPER TOWELS on my burn and tells me she is done. I am super embarrassed that everyone else in the salon heard me scream and cry.’

After paying full price from the botched treatment because she felt she didn’t know better, the then 15-year-old went back to school where the staff nurse helped as best they could.

However, it didn’t take long before Badesim realised the situation hadn’t improved.

‘Next morning I wake up with insane pain, my leg is still wrapped up,’ she continued. ‘My parents take me to my uncle who is a plastic surgeon to check it out.’

Once the bandages came off the full extent of the injury became clear.’ 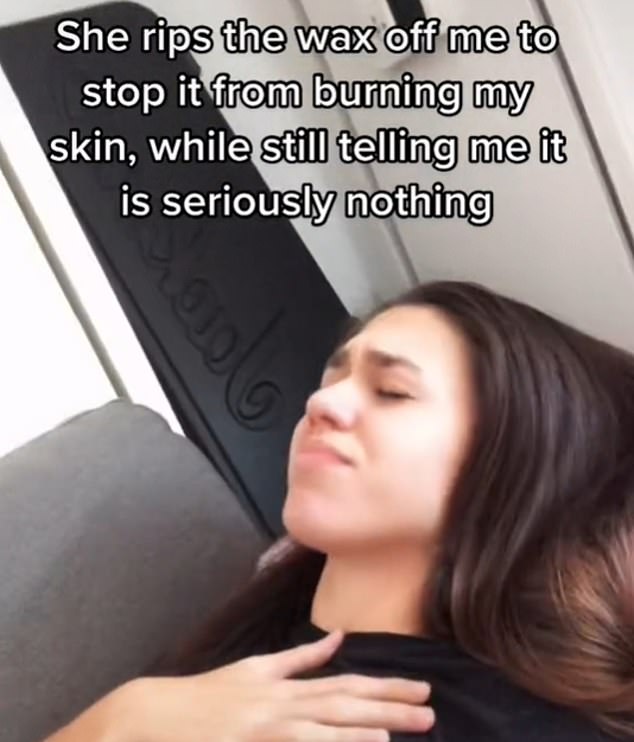 Badesim, who was only 15 at the time of the waxing injury, explained how the technician ripped hot wax from her legs after spilling it

Commenters on the video were outraged for Badesim and slammed the waxing technician for her unprofessional manner.

‘As an esthetician she needs to lose her licence. That is unacceptable,’ raged one, while a second penned: ‘God, I’d be furious. She could’ve saved you pain and suffering by immediately owning up so you could cool it properly and have it cared for.’

A third speculated on the extent of the injury saying: ‘That’s a 2nd degree burn, it got deep enough to effect the nerves and damage the lower layer of the epidermis.’

Elsewhere, others sympathised by sharing their similar disastrous salon experiences.

‘Horrifying. A nail tech sliced my finger deeply with a plastic buffing thing and tried to “seal” my open wound with clear top coat,’ recalled one.

Another penned: ‘I had a similar thing but with getting my eyebrows waxed. wax was super heated and she dropped it on my forehead. Luckily she missed my eyes.’

Meanwhile, a further contributed: ‘I had a similar situation with a speed waxer interviewee at our spa. She left scars but shamed me for crying and telling my bosses.’

In another video, Badesim filmed ‘part two’ where she answered questions that had been asked multiple times by her concerned followers – including the extent of the damage.

‘My family and I were very shocked to see what was underneath the bandages, we were not expecting that at all,’ she explained.

‘My uncle was surprised that I didn’t pass out from pain but I guess that was because she kept telling me I was making a big deal out of it, so I kind of just sucked it up.’

‘The following two-three weeks I had to go to my uncle’s clinic every single day because if a burn like that gets infected it could end up horrible.’

‘I couldn’t walk properly for a while either because just putting pressure on that leg hurt.’ 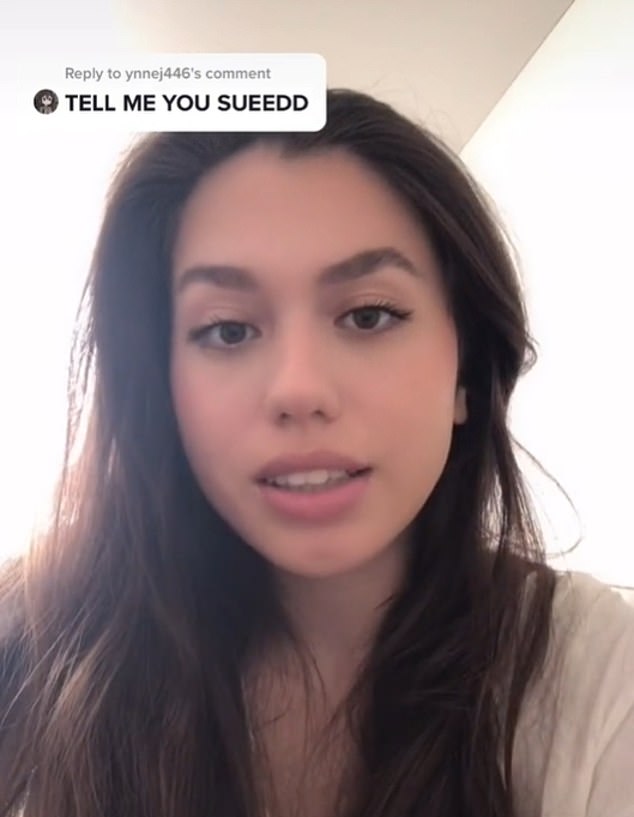 In a follow up video, Badesim (pictured) revealed the answers to some much-asked questions surrounding her injury

Responding to questions about whether she sued, Badesim explained: ‘My family asked me if I wanted to sue and they said they would respect my decision and me being 15, I feel like I was very naïve.

‘I knew that the lady who was waxing me had a young daughter and I didn’t want her to suffer because of her mum’s mistakes.’

Badesim explained that, thankfully, there is minimal scarring on her leg now – adding you can only see it if you look closely.

She also revealed that she discovered the salon closed two months later – but never found out why.

Responding to a much asked question about why shaving is ‘frowned upon’ in Turkey, she claimed: ‘It’s just one of those places where body hair on grown women is gross, it has to be tamed and for some reason they believe that shaving doesn’t do a good job.’

‘But I can only shave now because I am so scared after my experience.’