Home » Lifestyle » A womanising failure who drank himself to death: The secret shame of Ernest Shackleton 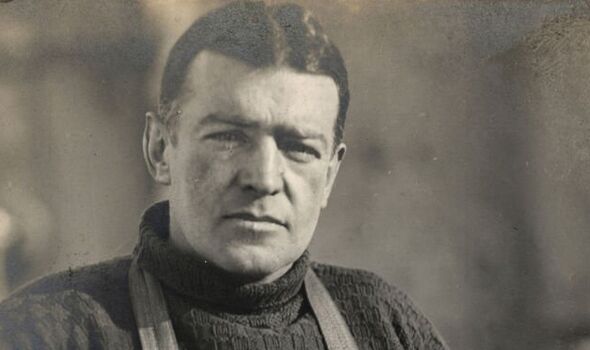 Out of the inky darkness of the icy depths, it emerges like a ghost in the night. The wreck of the Endurance, encrusted in bleached sea anemones and history, speaks to us eloquently more than a century after it disappeared beneath the frigid waters of the Antarctic. The remarkable discovery of Sir Ernest Shackleton’s lost ship, almost intact though crushed by ice and with mast and rigging shattered, sits indomitable as ever in dramatic video images sent from 10,000 feet beneath the Weddell Sea.

Defiant even in death, the name on the stern seems as fresh as if painted yesterday: Endurance – a word redolent with the heroic British grit that came to immortalise its captain.

Shackleton is lionised today as an inspirational leader whose unquenchable spirit triumphed when all seemed lost. His barquentine Endurance became trapped in ice fields while on an expedition to cross Antarctica in 1915, crushing the hull. Abandoning ship, Shackleton’s 28-man crew were stranded, facing death.

But he marched them across the ice, dragging two small boats, sailed 350 miles to a deserted island, then led a small party 800 miles in an open boat to the British island of South Georgia, scaling a mountain to find rescuers who returned for the lost crew. All survived.

Yet there was a dark side to the heroic explorer, one that he might wish remained interred in the ocean depths. Modern historians have come to see Shackleton as a deeply flawed man, a poorly-organised adventurer obsessed with fame and wealth, a congenital womaniser who habitually cheated on his wife, and whose repeated business failures left him the equivalent of £1.5million in debt when he died.

“On the ice he was a giant, but at home he was a failure, his chaotic private life involving a string of affairs and a series of failed business ventures,” says Michael Smith, author of Shackleton: By Endurance We Conquer.

“He left behind a trail of debts and nurtured a child-like longing to search for buried treasure.”

Even as a legendary explorer, he had his failings. Before he set off for Antarctica in late 1914, sailors on South Georgia warned Shackleton that ice conditions in the Weddell Sea were the worst in living memory. He sailed anyway. He failed to reach land in Antarctica, never penetrating the packed ice, and failed to cross the continent as planned.

His previous adventures fared little better. When he helped lead an Antarctic expedition in 1901 with Robert Falcon Scott on HMS Discovery, he fell ill, and had to be carried on a sled across the ice, until ultimately sent home.

His 1908 attempt to reach the South Pole ended in defeat, 112 miles short of his goal, and the half-starved expedition barely survived the return trek.

That British Antarctic Expedition was largely funded by Scottish industrialist William Beardmore, who guaranteed a £7,000 loan to fund the venture – partly as a means of getting the womanising explorer as far away as possible from his wife.

Elspeth Beardmore had fallen deeply in love with Shackleton while he was visiting Edinburgh, and became his vociferous supporter. When Shackleton discovered one of the world’s largest glacier valleys in Antarctica he named it Beardmore Glacier, as much a nod to the woman who loved him as to his benefactor.

But Elspeth was just one of many, and Shackleton lived up to the reputation of the mariner with a woman in every port. In London, the elderly Elizabeth Dawson- Lambton served as his deep-pocketed and equally smitten supporter.

In Cape Town, South Africa, he left his mark on the heart of young beauty Hope Paterson, who he met in 1902 after being sent home ill from Antarctica. He wrote her love poems, and when he discovered a peak in Antarctica in 1908, he named it Mount Hope and sent her a piece of its rock.

Shackelton’s long-suffering wife Emily Dorman gave him three children but felt neglected even when he was not at the far ends of the Earth, as he was in constant demand.

After returning from Antarctica in 1909, he was knighted by King Edward VII but, saddled by debt, was forced to spend much of his time giving lectures, often to half-full theatres.

Once he sailed, Emily would receive only rare telegrams confirming he was still alive, followed by months of agonising silence. “The waiting is so long and weary,” Emily wrote. “I used to dream that he was back and that I said, ‘Tell me this isn’t a dream’, but it always was.”

Born in Kilkea, County Kildare to an Anglo-Irish family in 1874, Shackleton grew up in London’s suburbs before working as a third mate on sailing ships. He was obsessed with the pursuit of wealth. But like the South Pole, financial success would elude him.

“Shackleton was a spectacular failure at every business scheme he encountered,” says Michael Smith.

“He tried gold mining, transporting troops home from wars, and stamp collecting – all ending in disarray. He left a trail of unpaid debts.”

Even as he sailed south on the Endurance, Shackleton left in his wake a clutch of angry creditors demanding payment for food and equipment. Several of the crew on his final expedition, in 1921, had still not been paid wages from their previous expedition in which the Endurance was lost.

Shackleton’s failures included schemes to transport 40,000 Russian soldiers from Vladivostok to the Black Sea, exploiting forests in Mexico, mining coal in Norway and minerals in Northern Russia, operating a news agency, and finding an El Dorado of precious stones in Antarctica. All his businesses went bust, leaving him ever deeper in debt.

Shackleton is remembered for his relentless energy and strength, but the reality was very different.

“Shackleton has been anything but up to the mark, and today he is decidedly worse, very short-winded and coughing constantly, with more serious symptoms”, wrote scientist Edward Wilson in his diary in January 1902, before sending him home to convalesce.

Shackleton was only 47 years old when he died of a heart attack on his way back to Antarctica, in 1922. He had been drinking too much, according to the expedition’s doctor, Alexander Macklin, who urged the adventurer to “lead a more regular life”, and give up his vices, “chiefly alcohol”.

In death, Shackleton’s will helped provide for his crew, but not for his widow, who was saddled with debts worth around £1.5million today.

The Endurance, long considered one of the world’s greatest “lost” shipwrecks, will remain untouched on the ocean floor, protected as a historic site, its wooden beams miraculously preserved. But Shackleton’s human failings deserve to be exhumed and aired in the cold light of day.

Despite his failed expeditions, poor planning, monstrous ego, wrecked business ventures, and many infidelities, Shackleton’s name has become synonymous with leadership in a crisis, strength of character and, like his ship’s name, endurance.

Perhaps his achievements are all the more remarkable because of his flaws.

4-Month-Old Baby with Rare Genetic Disorder in Need of Bone Marrow Donor: 'He Is One in a Million'