Former prime minister Tony Abbott says Australia should consider buying retiring nuclear-powered submarines from either America or Britain for training purposes and as insurance in the event of a conflict in the region in coming years.

Speaking from Washington, where he is travelling in a private capacity, Mr Abbott said he had been canvassing the idea in the United States of Australia acquiring some older-model nuclear submarines “within months, rather than decades”. 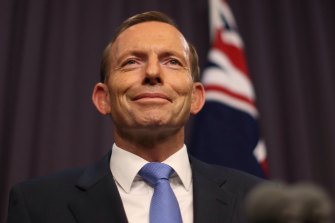 Australia in September axed a $90 billion contract with France to build 12 conventional submarines, the first of which had been due in 2034, in favour of developing at least eight submarines using American or British nuclear-propulsion technology under their AUKUS defence pact.

But the proposed nuclear fleet may not be operational until the 2040s, despite Defence officials last year warning the country no longer had a 10-year window to defend itself from an attack.

Mr Abbott said Australia should look at obtaining some of the US’s retiring Los Angeles-class or Britain’s Trafalgar-class submarines in the meantime.

“The obvious possibilities are to take over some retiring LA-class submarines currently in the reserve fleet or indeed the two Trafalgar class submarines that will be retiring from the Royal Navy in the next 12 months or so,” he told a panel discussion at the Wilson Centre, a non-partisan policy forum.

“One of the issues which I’ve been informally discussing here in Washington and elsewhere in the United States is: Might it be possible for Australia to acquire a retiring LA-class boat or two, to put it under an Australian flag, to run it if you like as an operational training boat, but it would be an addition to the order of battle in the Western Pacific should that be necessary?

“These are just informal discussions but nevertheless I think it is important to socialise these ideas with people in Washington and were I in London I would be doing the same thing there.”

Fresh from warning Beijing could “lash out disastrously very soon” in a speech in Taiwan last month, Mr Abbott also offered a dire assessment of escalating tensions in the Indo-Pacific amid growing Chinese assertiveness, warning “the challenges are pressing, the peril is not far off”.

A move to acquire nuclear submarines for training purposes would address growing concerns among national security experts that Australia will not have the expertise and industry to maintain a fleet of nuclear-powered submarines.

Australia’s Chief of Navy recently opened the door to the nation’s ageing fleet of conventional Collins-class submarines remaining in operation into the 2050s if the proposed nuclear-powered fleet cannot be built in time.

Michael Shoebridge, the director of the defence and national security program at the Australian Strategic Policy Institute, said Mr Abbott’s suggestion to acquire retiring nuclear submarines from either the US or Britain should be considered.

But Mr Shoebridge said it would be “just one little piece of really complicated enabling work”.

“We need people who are experienced in the safe operating of the boat themselves and we need to create the onshore infrastructure to enable that,” he said.

“It’s complicated because an LA-class submarine isn’t the same as the current ones. So becoming an expert in all the systems of it would still require different knowledge for the submarines we will be getting.”

The Defence Department was contacted for comment but had not responded by deadline.

Get daily updates on the climate summit that will shape our future. Sign up to our COP26 newsletter here.

Prince Harry Has a Lot of Princess Diana's Personality While Prince William Is Aligned With Prince Charles, Royal Expert Says