This obituary is part of a series about people who have died in the coronavirus pandemic. Read about others here.

The appointment in 2001 of the Russian conductor Alexander Vedernikov, then 37, as music director of the Bolshoi Theater in Moscow drew international attention.

The legendary opera and ballet company had been demoralized for years by infighting, bureaucratic upheavals, hostile reviews and a decrepit main building. The conductor Gennady Rozhdestvensky, the Bolshoi’s artistic director, had just quit in fury over his treatment.

Mr. Vedernikov promised to shake the institution out of its torpor and introduce an ambitious “advertising, rebranding and public relations” program to attract younger audiences and drag the Bolshoi into the 21st-century, according to an article in The Guardian headlined “Quiet Young Conductor Tries to Tame the Bolshoi Snakepit.”

Eight years later, in 2009, it was Mr. Vedernikov who had had enough. Complaining that the theater “was putting bureaucratic interests before artistic ones,” as he told The New York Times, he resigned on the opening day of the Bolshoi’s summer tour of Italy.

Despite the tumult at the Bolshoi, Mr. Vedernikov, who died on Oct. 29 in Moscow, went on to enjoy a thriving international career. He was 56. The cause was complications of Covid-19, his management, IMG Artists, said.

Mr. Vedernikov was widely credited with stabilizing artistic standards at the Bolshoi, enhancing the orchestra’s profile as a concert ensemble and broadening the repertory. He also helped activate long-delayed plans for a reconstruction of the theater, though at the time of his departure the project was beset with delays, cost overruns and budget cuts. It was not completed until 2011.

Mr. Vedernikov regularly conducted leading orchestras including the BBC Symphony and the City of Birmingham orchestras, the Netherlands Radio and Helsinki philharmonics and the NHK Symphony in Tokyo. He led performances at opera houses in Milan, Venice, Berlin, London and elsewhere, including the Metropolitan Opera for a run in 2013 of Tchaikovsky’s “Eugene Onegin.”

He had an especially close association with Denmark, having been chief conductor of the Odense Symphony Orchestra from 2008 through 2018. He then became chief conductor of the innovative Royal Danish Opera in Copenhagen. He had been scheduled to conduct the Royal Danish orchestra in Beethoven’s Ninth Symphony on Oct. 30. The performance, which went forward, was dedicated to his memory. 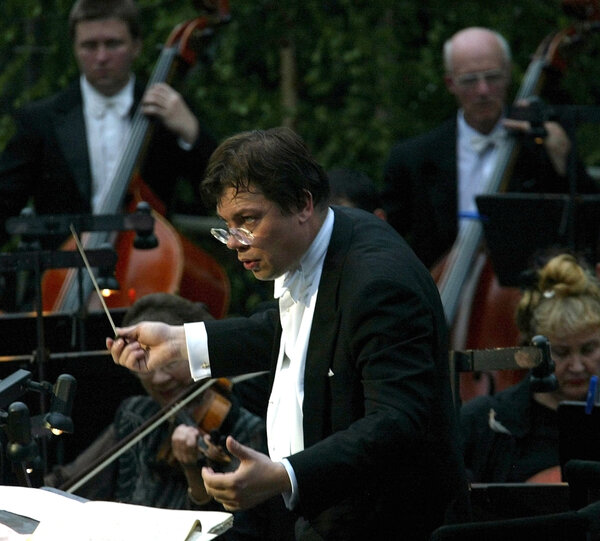 Alexander Alexandrovich Vedernikov was born in Moscow on Jan. 11, 1964. His father, also named Alexander, was a noted operatic bass. His mother, Natalia Gureyeva, who survives him, is a professor of organ at the Moscow Conservatory. Other survivors include his wife, Elena; a daughter, Natalia, from an earlier marriage; and a brother, Boris.

Mr. Vedernikov completed his studies at the Moscow Conservatory in 1990 and five years later founded the Russian Philharmonic Symphony Orchestra, remaining its leader until 2004.

During his career he acquired a reputation for fast tempos, forceful fortissimos and a kinetic conducting style. One critic once said he “supplied his own wild-man choreography on the podium” in a performance of Stravinsky’s “The Rite of Spring.” Yet he could also bring breadth, richness and subtlety to his music-making.

He was the conductor in 1992 when, at 15, Jennifer Koh played Tchaikovsky’s Violin Concerto during the final round of the International Tchaikovsky Competition for Young Musicians in Moscow. (Two years later she shared the top award in the main competition.)

“I hadn’t really played it with any conductor until Sasha,” she recalled. “He sat quietly in a corner, intensely listening as I started to play, and his eyes lit up,” she said. From that moment, she explained, Mr. Vedernikov had “that ability to really hear how I played and give me the space to be myself.”

“He once told me the sweetest thing,” Ms. Koh said: “All musicians must always help each other.”

Police Seize 324,000 Used Condoms Being Washed and Resold in Vietnam