“I’m definitely in a healthier place.”

While speaking with InStyle for their June cover story, the singer-actress reflected on her award-winning performance playing the jazz singer in “The United States vs. Billy Holiday.” Day — who won the Best Actress award at the 2021 Golden Globes and also received an Oscar nomination for the role — explained why she didn’t want her portrayal of Holiday to be sexualized. 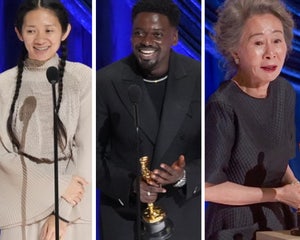 Day added that she’s now “outside of the addiction.”

“I feel now, after playing Billie, that I’m honoring her, and the strength that is femininity,” she shared. “I’m definitely in a healthier place to enjoy that because I’m outside of the addiction, if you will. So, yeah, it’s been really fun, because it’s been very new for me.”

The “Rise Up” singer also opened up about her weight loss. Day lost 40 pounds to play Holiday.

“I’ve had people ask me, ‘Do you feel prettier now that you’ve lost weight?’ I was like, ‘Hell, no! I liked being juicy! I was cool,'” she admitted. “But I do like the way [the weight loss] feels on my body, I like the way it feels on my joints. You do notice a difference.”

“Besides, to me, there is no such thing as a classic beauty,” she continued. “Beauty takes on so many different forms, in different times and depending on the nation. It’s just about being confident, loving yourself, and understanding your value.”

The Golden Globe winner went on to credit Holiday for making her feel beautiful.

“And it has to do with Billie,” Day explained. “It was almost like she said, ‘Sis, we’re going to have to close this, because I have to survive.’ She opened me up to valuing myself in a way that I hadn’t fully before.”

There's a Love Is Blind Vacation Package at the Resort Where the Show Was Filmed, and OMG