Army cadet, 22, is crowned de facto Miss England as she’s voted its first ever Finalist of the Year by the public after the pageant was scuppered by the pandemic

An adrenaline junkie Army cadet who swapped her combat fatigue for the catwalk has been crowned Miss England’s first ever Finalist of the Year.

Alina Green, 22, from Bracknell, Berkshire, has won the equivalent of the Miss England title after the prestigious beauty pageant was scuppered by the Covid-19 pandemic.

Organisers of the competition held an online public vote to crown a winner after the contestants uploaded applications filmed in their homes and gardens on YouTube.

Winning an automatic top ten place in the 2021 final, Alina was overjoyed when she was named Miss England Finalist of the Year 2020 last week. 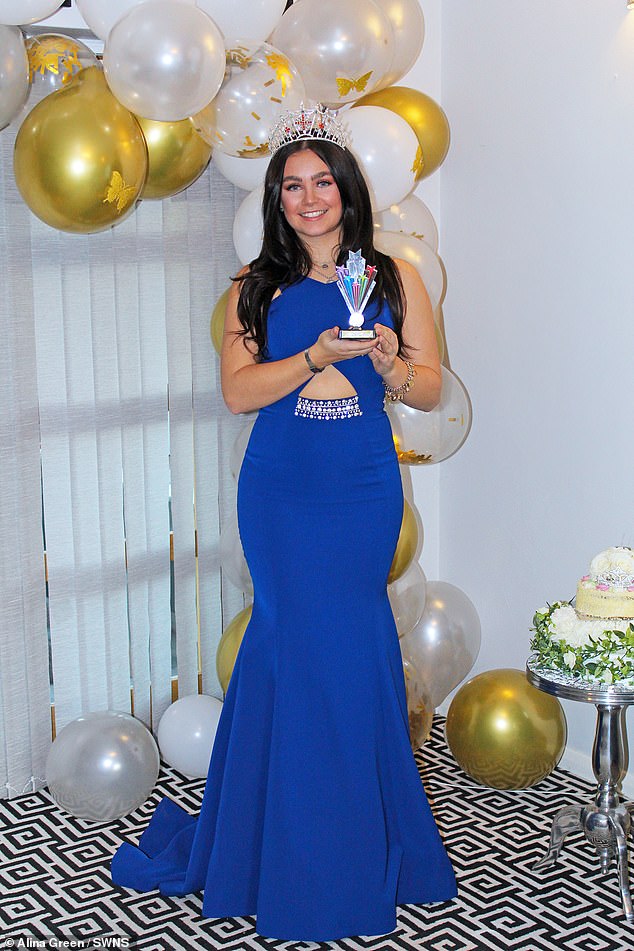 Alina Green, 22, (pictured) from Bracknell, Berkshire, has been crowned Miss England’s first ever Finalist of the Year 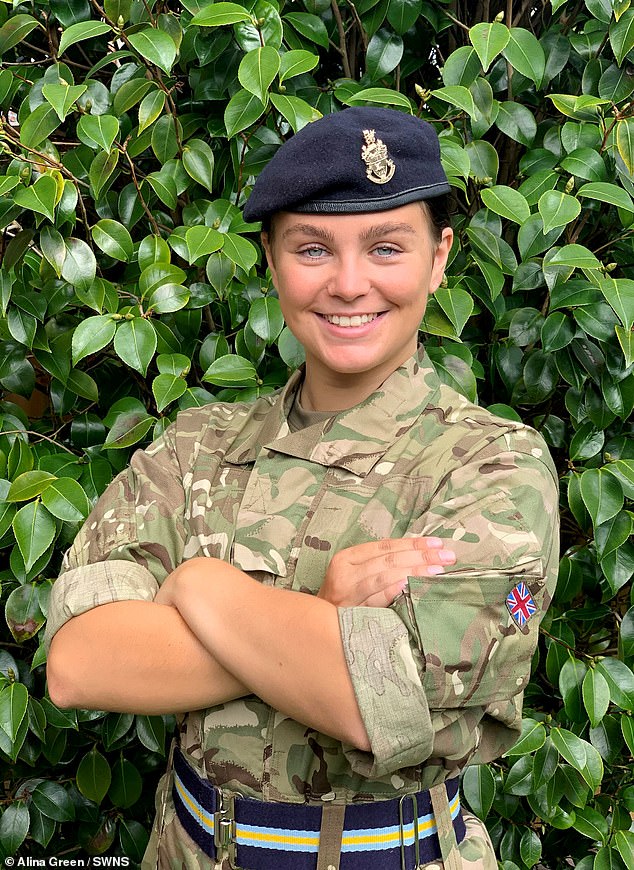 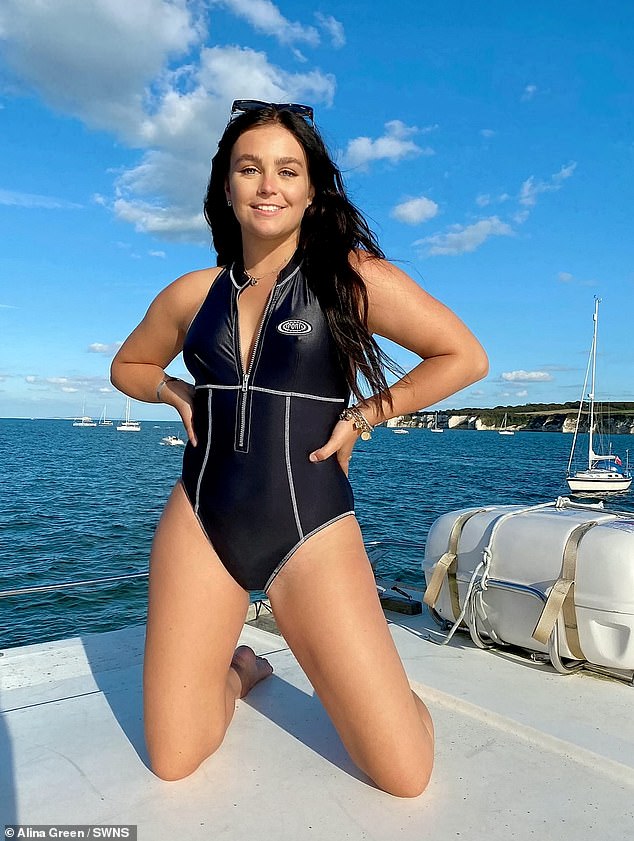 Alina (pictured) who is the reigning Miss Dorset, was shortlisted as one of five finalists after raising £10,000 for charity

Alina wowed the judges after being dubbed a real-life G.I Jane due to her love of daredevil hobbies including skydiving, mountain climbing and swimming with sharks.

The cadet officer at Southampton University Officer Training Corps has applied to join the British Army Reserves once she finishes her training.

Also a fashion design student in Bournemouth and the reigning Miss Dorset, Alina was shortlisted as one of five finalists by voters on the Miss England app after raising an impressive £10,000 for charity.

Alina said: ‘I was just in complete shock when they told me I had won.

‘I never expected it at all. It has been a tough year, obviously it has for everybody, so it was lovely to have something to celebrate. 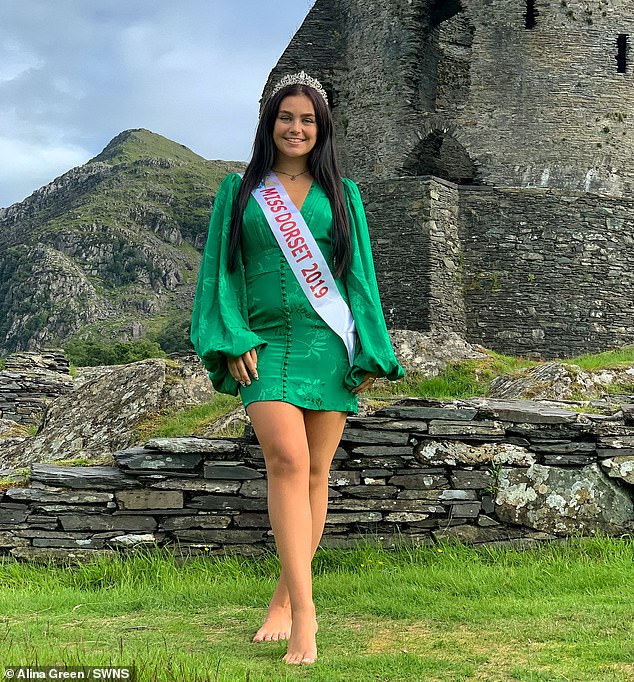 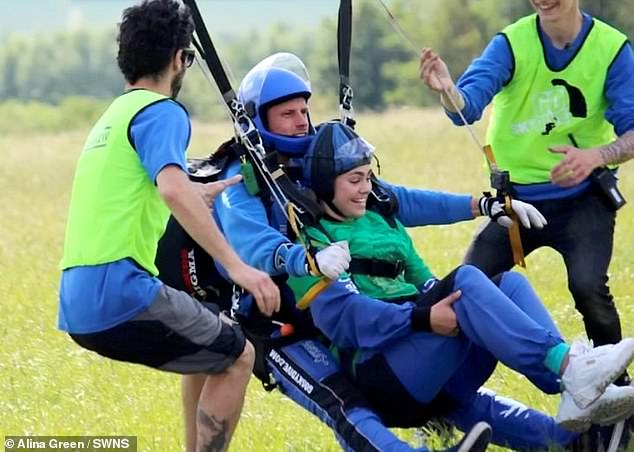 Alina revealed she will be using her new title to promote We Do Ethical’s tree planting pledge. Pictured: Alina skydiving

‘I just want to thank everyone who voted for me on the Miss England app. I knew I had been shortlisted but never in a million years thought I’d win it.

‘I’m thrilled with winning and I’d love to use my new title to promote We Do Ethical’s tree planting pledge.

‘If one in four of us pledged to plant 240 trees today we would become carbon neutral by tomorrow. It’s something I am very passionate about.

‘We had to submit a PowerPoint presentation of all the charity work we had done and how we had publicised ourselves and it must have impressed the judges.

‘The competition’s organiser phoned me to discuss my presentation and just casually said ‘by the way, you’ve won it’ – I was absolutely speechless. 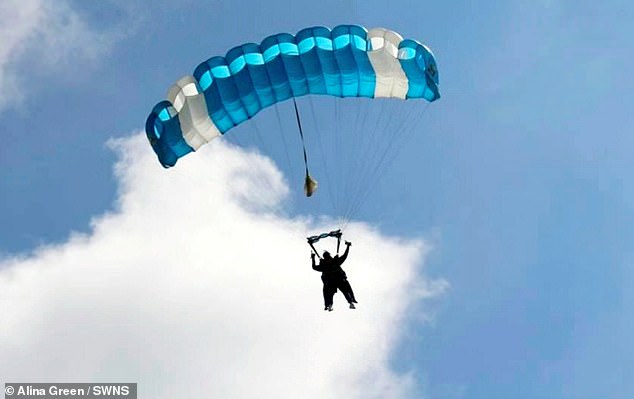 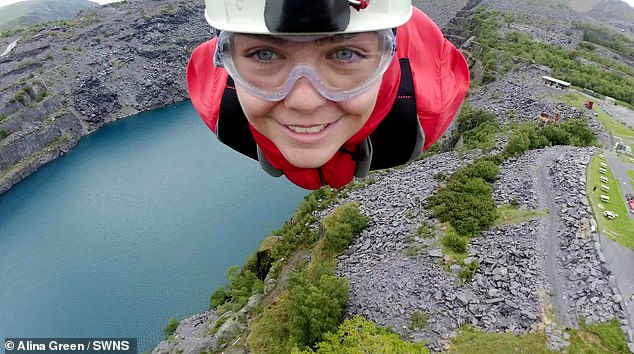 Alina discovered she had won the prestigious beauty pageant in a phone call from the competition’s organiser about her presentation. Pictured: Alina flying velocity 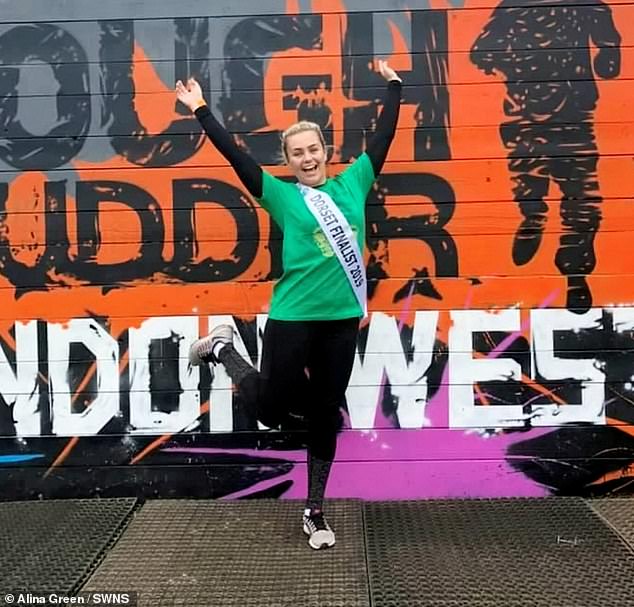 Alina said she would’ve been doing charity fundraisers, even if she wasn’t competing for the Miss England title. Pictured: Alina doing Tough Mudder

‘I’ve worked really hard with the charity fundraisers, but it doesn’t feel like work to me – I would be doing it even without the Miss England competition.

‘I just enjoy a bit of an adventure and that’s why I thought ‘why not give Miss England a go as well’. But I never dreamed I would get this far.’

Adventure-loving Alina has completed Tough Mudder, The Three Peaks Challenge and a shark dive at the Bear Grylls Adventure in Birmingham.

She is also a keen zip-liner, polo player and scuba diver and plans to complete a wing walk and bungee jump for her next charity fundraisers. 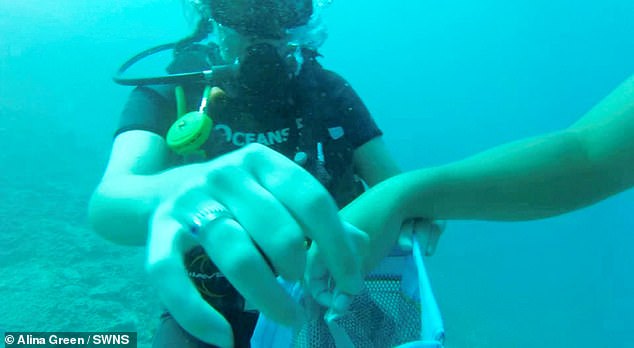 Alina has plans to complete a wing walk and bungee jump for her next charity fundraisers. Pictured: Alina doing a dive clean in Bali 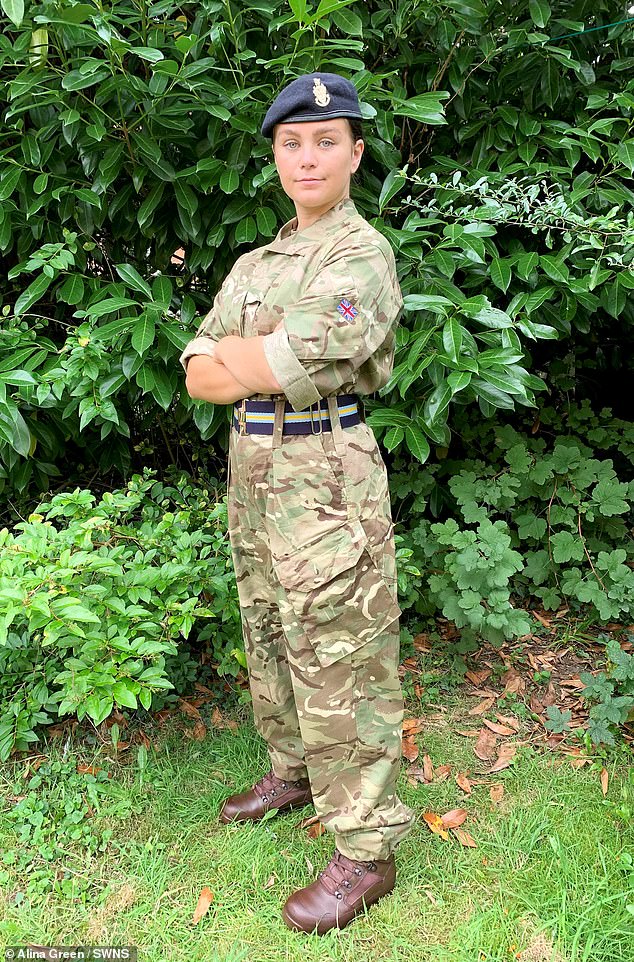 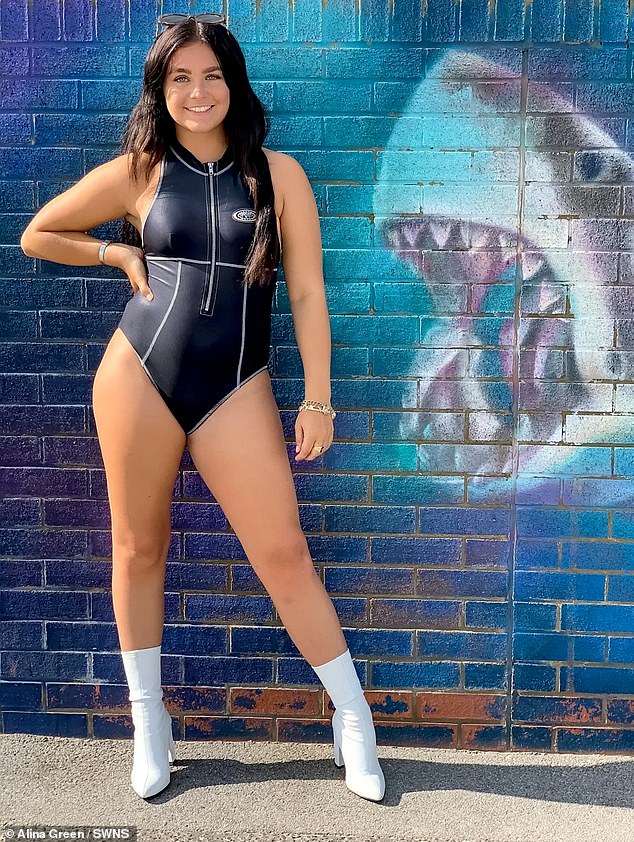 Admitting she likes to push her boundaries, Alina (pictured) said being a cadet officer and beauty queen challenges her in different ways

Alina added: ‘I’m looking to do a wing walk next as long as we’re out of lockdown – I enjoy doing quite extreme things and really like an adrenaline rush.

‘I like doing things that will challenge myself as well and push my boundaries and I think being a cadet officer and beauty queen does that but in different ways.

‘The training corps is really good for leadership qualities and you learn army skills as well. I personally love it and again it’s quite an ‘out there’ sort of thing to do. 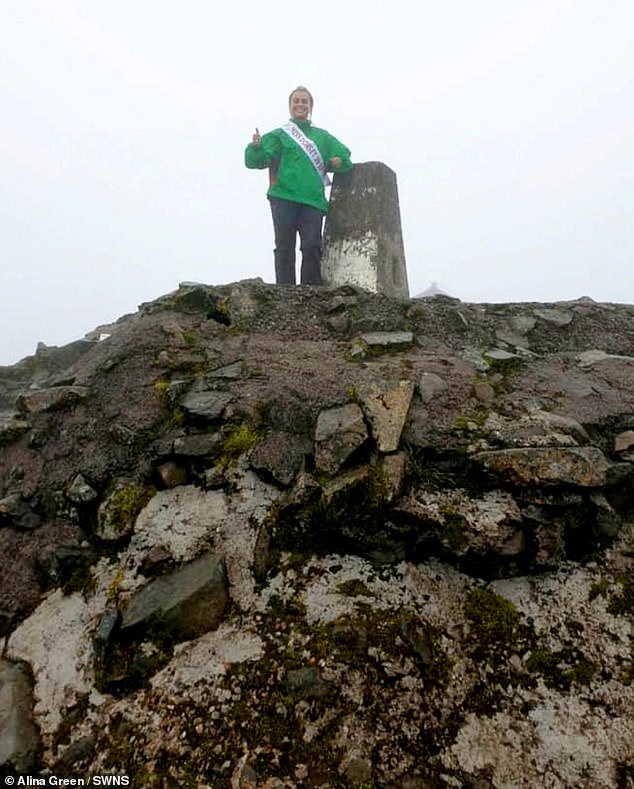 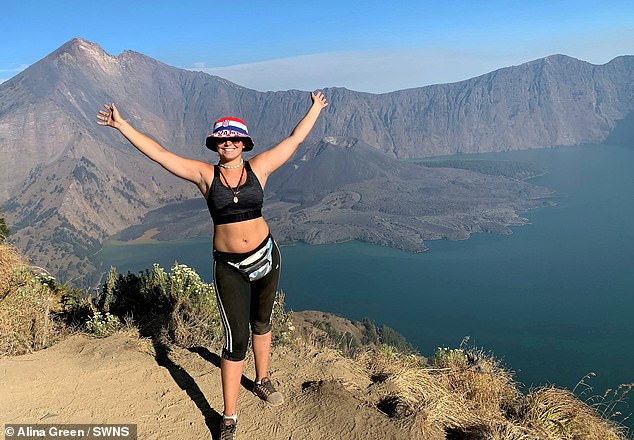 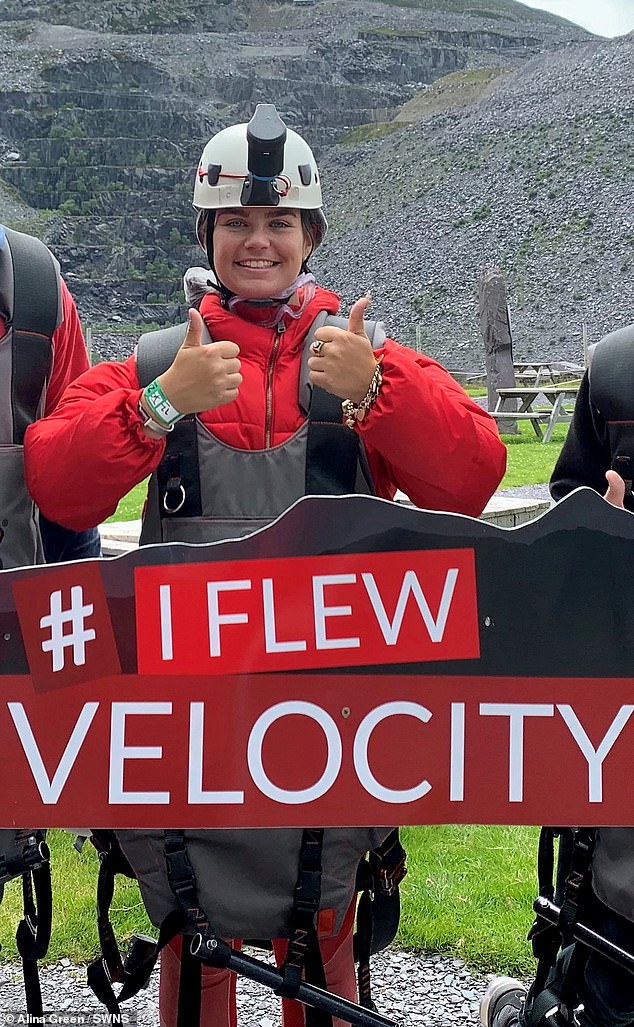 Alina (pictured) who has done an online dog show and made recycled face masks, revealed it was difficult to raise money during the pandemic

‘For the fundraising aspect of the competition, I just try to do things that are a bit different and out there.

‘I wanted to give people a reason to give me money for the fundraising instead of doing something quite mundane.

‘The shark dive was fun. Last year, I also did the Tough Mudder and Three Peaks Challenge and I’ve been on the world’s fastest zipline in Wales for charity as well.

‘I’ve also done beach cleans, an online dog show and made recycled face masks – so it wasn’t all action packed. It’s been hard with the pandemic but I’ve done what I can.’ 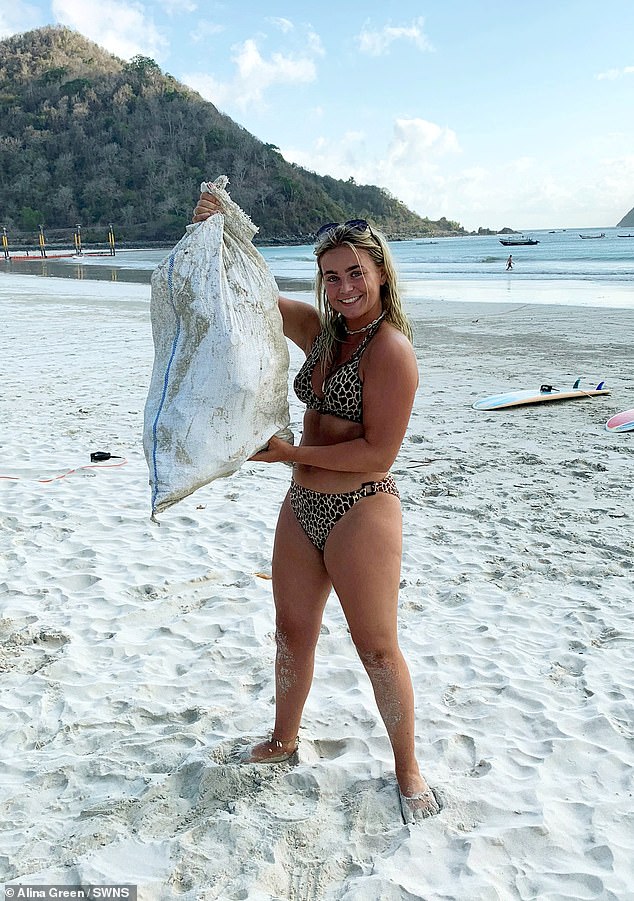 Alina (pictured) said having the competition disrupted by the pandemic was a blow, however organisers are hoping to host the finals in April 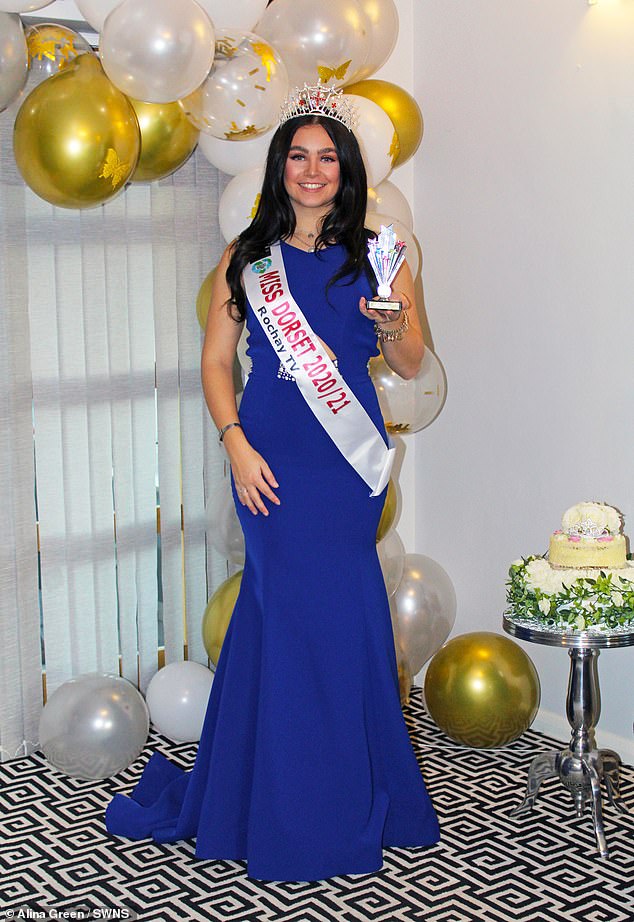 This year, Miss England contestants had to submit their introductions, catwalk and talent videos online after the competition was disrupted by coronavirus.

Regional winners were crowned in their kitchens and back gardens during lockdown to make it through to final, which was later cancelled.

Alina said: ‘It was a real blow but the organisers are hoping the final will be held in April now. You never know with the way things are going but fingers crossed.

‘I really hope it goes ahead but I’ve just been delighted to get this far and be crowned finalist of the year – I feel very honoured.’

Alina was presented with a trophy and £500 worth of gifts – including designer shoes, make-up, skincare and hair products.

Prince Charles is all smiles as he officially opens an exhibition