Home » Lifestyle » Australia to back international definition of anti-Semitism

Prime Minister Scott Morrison has promised an international forum to stamp out anti-Semitism that the Australian government will formally endorse an international working definition of discrimination against Jews as a religious or racial group.

In a pre-recorded message from Canberra, Mr Morrison told the Malmö International Forum on Wednesday evening that his government would embrace the International Holocaust Remembrance Alliance’s working definition, joining more than 40 nations and hundreds of local governments, sporting organisations, institutions and universities around. 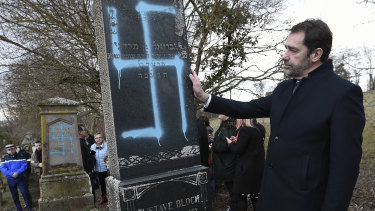 Australia will back an international agreed definition of anti-Semitism.Credit:AFP

Mr Morrison said Australia would adopt the definition “as a people, and as a nation”.

“Anti-Semitism has no place in Australia,” Mr Morrison told the forum.

“It has no place anywhere in the world. And we must work together, resolutely and as a global community to reject any word or any act that supports anti-Semitism towards individuals, towards communities or religious facilities.”

The IHRA – an intergovernmental body made up of 31 member countries – defines anti-Semitism as “a certain perception of Jews, which may be expressed as hatred toward Jews. Rhetorical and physical manifestations of anti-Semitism are directed toward Jewish or non-Jewish individuals and/or their property, toward Jewish community institutions and religious facilities”.

The non-legally binding definition is also supported by 11 contemporary examples of anti-Semitism designed as a resource to help educate people as to what anti-Semitism is, and what is legitimate criticism of Israel.

Many police forces around the world use a version of the definition, which has been described as a useful tool which assists officers to identify what could constitute anti-Semitism.

But the definition has become increasingly contentious with human rights groups, university academics and lawyers, who have expressed concerns that it restricts freedom of speech by prohibiting legitimate criticism of Israeli government action in the Palestinian territories.

They argue the language is vague and open to interpretation and invites a conflation of the criticism of Israel with antisemitism.

Legal experts, including prominent human rights barrister Geoffrey Robertson, have raised concerns that the definition was being used to police speech.

The definition spells out that it is not anti-Semitic to criticise the government of Israel, but says it is anti-Semitic to draw comparisons of contemporary Israeli policy to that of the Nazis and also holding Jews collectively responsible for actions of Israel.

It also includes traditional stereotypes such as regarding Jews having inordinate power over media, financial systems or governments and or denying Jews the right to self-determination.

Federal Education Minister Alan Tudge last month called on the government to adopt the definition amid a rise of violence and threats toward Australian Jews on university campuses and in the community. He said Jewish students had reported being prevented from joining some clubs, particularly progressive ones such as an LGBTI club because Zionism was said to be contrary to the club’s mission.

The British government was among the first to adopt the working definition in 2016 while the United States, Canada and Germany have also followed. United Nations Secretary General Antonio Guterres has publicly supported the definition as well as the European Union and the English Premier League.

“Antisemitism is increasing around the world”, Mr Leibler said.

“And the key to its reduction is education. The IHRA working definition provides the central plank to this educational endeavour. Antisemitism should have no place in our society. It should be defined, identified and rejected.”

Mr Leibler said its adoption should not be merely symbolic and while the government has led the way, universities, institutions and businesses across the country should also adopt the definition as part of their anti-discrimination policies.