Do YOU suffer from skin hunger? Author baffles GMB viewers as she explains how we’re missing skin-to-skin contact – and even SNIFFING each others hands after handshakes

An author has left ITV viewers baffled after discussing how people are suffering from ‘skin hunger’ as they are starving for physical touch due to the coronavirus pandemic.

Ella Al-Shamahi, author of The Handshake: A Gripping History, appeared on Good Morning Britain to discuss whether hugs and handshakes should be banned.

She said she was suffering from ‘skin hunger’, a term which describes the physical and mental health consequences caused by a lack of human touch, such as higher stress levels, a weakened immune system, and poor sleep.

However, the phrase was quickly mocked by viewers who simply couldn’t believe that the condition was real, with one person writing on Twitter: ‘Great! On top of everything else now I’ve got skin hunger.’ 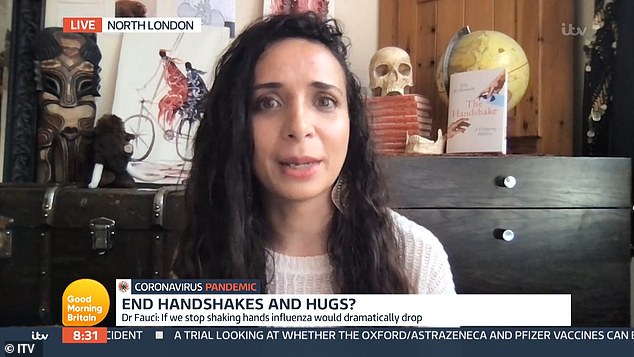 Ella Al-Shamahi (pictured), author of The Handshake: A Gripping History, appeared on Good Morning Britain to discuss whether hugs and handshakes should be banned

Speaking today, Ella said: ‘I am suffering from what a lot of people are suffering from during the pandemic, which is skin hunger. That basically means I’m not getting touched as much as I need to be touched.

‘I’d say I think there is probably an epidemic of skin hunger right now, kind of people really feeling the need to be touched.’

The author also discussed how scientists previously discovered that a handshake is actually a way for us to get a good sniff of someone we have just met.

Researchers at the London-based Weizmann Institute of Science found in 2015 that humans unconsciously use the touch from a handshake as a way to sample smells from each other. 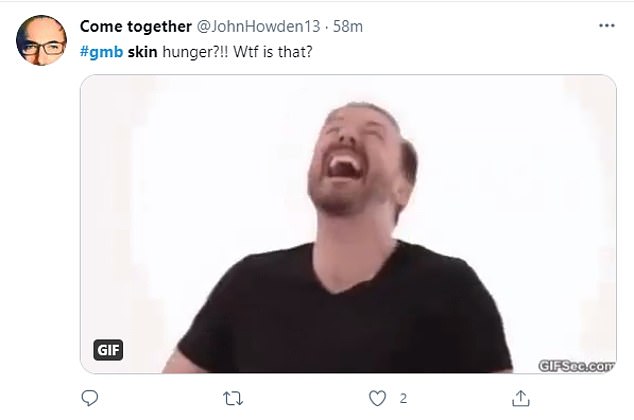 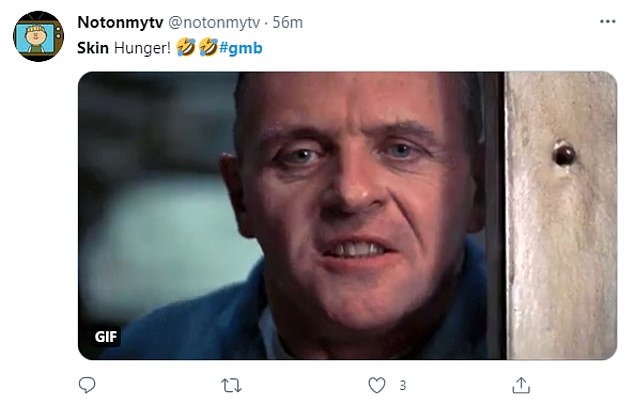 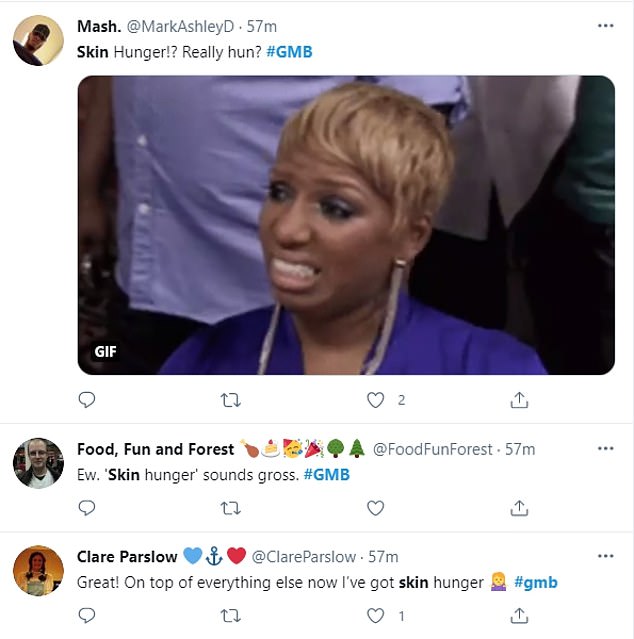 In a study using hidden cameras, researchers observed people as they greeted each other with and without handshakes.

Those that grasped hands upon meeting then touched their faces and around their nose far more often afterwards compared to a greeting where there was no physical contact.

The scientists believed that the face touching is a way of subtly sniffing the hand used in the handshake and it was particularly prevalent when greeting people of the same sex.

But viewers weren’t impressed with Ella’s points, questioning the term skin hunger, with one writing: ‘Skin hunger? Are you Hannibal Lecter?’

‘Ew. “Skin hunger” sounds gross,’ said another viewer, while a third added: ‘Skin hunger and sniffing. What are we turning into?’ 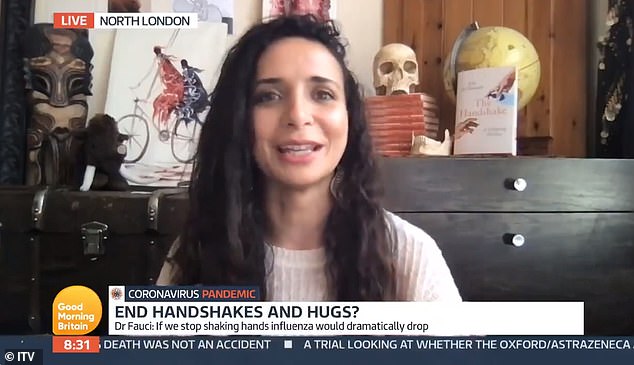 The author (pictured) said she was suffering from ‘skin hunger’, a term which describes the physical and mental health consequences caused by a lack of human touch, such as higher stress levels, a weakened immune system, and poor sleep

People are starving for physical touch as the coronavirus pandemic continues to rage on, and it’s beginning to take a real toll on physical and mental health.

In 2020, a survey found that more than three in five Americans are lonely, reporting feelings of being left out and lacking companionship.

And while social media and socially distanced get-togethers can help people feel more connected, scientists say there is no replacement for touch.

Humans are known to be social creatures. We crave togetherness – to be surrounded by friends and share our personal experiences with others. In fact, it’s been a key to our survival.

‘Because of things like Zoom and Skype, we have the ability to see somebody else as well as converse and get a lot of the same signals as we would in a face-to-face conversation,’ Dr Kory Floyd, a professor at the University of Arizona who studies the communication of affection and its effects on stress, told DailyMail.com.

‘What is missing is what we refer to as a sense of immediacy, a sense of presence you have with someone else when you can feel them in your space and touch.’

Loneliness has been associated with a number of health problems. It can affect mood disorders and trigger depression, but it has also been linked to heart disease, higher blood pressure, immunity function, and nervous system disorders.

A 2015 review study showed that both actual and perceived social isolation increased our chances of dying early by 26 percent.

In both countries, studies show that loneliness in people older than 60 can reach as high as 46 percent.

Who Has the Higher Net Worth Now Tom Brady or Gisele Bundchen?

Was Melania Trump's Infamous Jacket Actually a Dig at Ivanka?