Home » Lifestyle » Be a bloke from Sydney or Melbourne: How to win the Hottest 100

You might think that the art of writing a pop banger is too hard to distil into a formula, but an analysis of past winners of Triple J’s Hottest 100 countdown shows there are a few common factors that indicate what kind of tracks are likely to take out the top spot.

Whether it’s age, gender, location or genre, over the countdown’s history a clear pattern has emerged that shows what songs are most likely to attract the most votes from Australians. 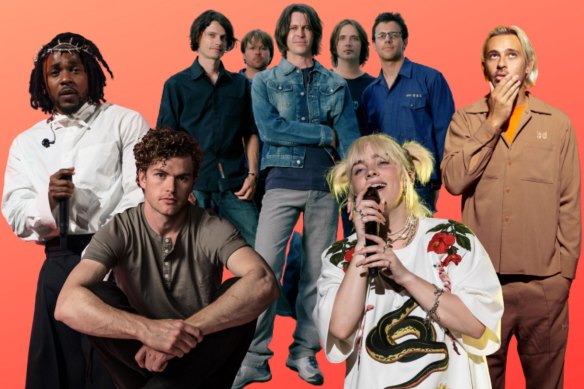 There are a few ingredients you might want if you’re cooking up a hottest 100 winning song.Credit:SMH/AP/Supplied

Firstly, you’ll want to be either a solo male artist or in an all-male band – this will significantly increase your chance of winning. In the countdown’s three-decade long history, there has only ever been one solo female winner: Billie Eilish.

Eilish took out the number one spot for her song Bad Guy in 2019. The win also made Eilish the youngest ever winner of the award, at just 18-years-old.

The next-closest solo female artists are Amy Shark, who came off second best to Flume in 2016 for her track Adore, and New Zealand singer-songwriter Lorde who was the runner-up in 2013 for her track Royals. In that year, Australia’s Vance Joy knocked the hotly tipped Kiwi off the top of the podium with his iconic track Riptide. Pedal back almost ten years from there, and Missy Higgins similarly was the runner-up in 2004 for her folky tune Scar.

While winners have come from across the world, it is definitely not a hindrance if you come from Sydney or Melbourne. And, if you’re an international nominee, then you better be from the United States or the United Kingdom. Anywhere else, forget about it (tiny exception for Limerick, Ireland based The Cranberries who took the win in 1994 for Zombie).

In fact, UK and US artists are about just as likely to win as our home-grown heroes, with English band Glass Animals taking the title in 2020 for Heat Waves, US-based Eilish in 2019 for Bad Guy, and US rapper Kendrick Lamar for Humble in 2017.

Don’t get us wrong, Australians love their local legends, which was no more obvious than last year when childhood favourites The Wiggles tugged on those nostalgia strings to win the countdown for their cover of Tame Impala’s Elephant.

However, it does help if you’re from the country’s two biggest cities, with past Sydney winners including Ocean Alley (2018) and Angus and Julia Stone (2010), while Melbourne has given us Chet Faker (2014) and Gotye (2011), among many others.

Local artists tend to make up a huge portion of nominees in general and a few acts have become experts at dominating the countdown in recent years. Sydney duo Lime Cordiale have had at least one song in the top 20 for the past three countdowns, and in 2019 the brothers had four songs in the countdown, three of which were in the top 20.

Similarly, local rockers Spacey Jane have become a countdown regular, placing third on the podium in 2021 for their track Lots of Nothing and second in 2020 for fan-favourite Booster Seat.

Remember: age is just a number

The most common age of winners is 26-years-old, but there’s no need to fear if you’re nudging into your thirties, and you’re actually not a total write-off because most winners fall into the age bracket of 31-36.

Denis Leary won the first countdown in 1993 at the ripe old age of 36 for his novelty song Asshole, while Bernard Fanning won it at the same age for his song Wish You Well in 2005.

Artists who were on the younger-side when they won include folk icons Mumford & Sons whose lead singer won at the baby-faced age of 22 for Little Lion Man in 2009, and Australian rock staple Jet, whose lead singer was just 23 when the band won in 2003 for their hit Are you Gonna Be My Girl.

Rock is the way to the top

Our analysis of the genre that is the most likely to take out the top spot indicates that rock is the dominant sound in 14 of the past 29 winners.

Hip-hop has only topped the countdown twice, first thanks to Macklemore and Ryan Lewis’s Thrift Shop and then Kendrick Lamar’s Humble. Hip-hop songs are also currently missing from this year’s predicted top 20.

Electronic songs have won just twice, but Flume, Eliza Rose & Interplanetary Criminal, and house producer Fred Again could all finish up the ladder in this year’s countdown. The latter may also get three legitimate house songs in the top half of the countdown – one of the best performances for the club genre since Fisher finished second in 2018 with Losing It.

Who is likely to win this year?

Speculation and precedent aside, Hottest 100 predictor 100 Warm Tunas shows, as of this week, that Gang of Youths are finally likely to score the top spot on the countdown with in the wake of your leave.

A passion project of software engineer and Triple J fan Nick Whyte, the tool has predicted the correct winner all but once since 2017, using voting forms shared on social media for its crystal-balling.

Sydney born artist and countdown regular Flume is currently the bookies’ favourite to take the countdown crown for Say Nothing (ft MAY-A), while other popular artists include Fremantle’s Spacey Jane and King Stingray from Northeast Arnhem Land.

A unique factor impacting this year’s countdown though, compared to previous years, is how viral some of the songs were on social media platform TikTok. The average number of TikTok videos sound tracked by tracks in Warm Tuna’s predicted top 20 was 129,121 TikTok videos.

Users of the social media app regularly use its soundtrack feature to add songs to videos, with some tracks exploding into viral sensations.

Dance hit B.O.T.A (Baddest of Them All) can attribute some of its global success to the video app, with almost 770,000 videos using it as a soundtrack, the most-watched of which has racked up 56.7 million views.

But clearly TikTok success is not the biggest factor determining this year’s Hottest 100 nominees, with tipped-favourites Gang of Youths’ song only being used in 95 TikToks, and predicted number two song, Ball Park Music’s Stars In My Eyes, only featuring in 30 TikToks.

The kind of analysis we’ve undertaken is, by its very nature, backwards looking and doesn’t necessarily predict what future countdowns could look like. Though, judging by what both the bookies and the Warm Tunas predictor are suggesting, it doesn’t look like this year’s countdown will be radically different in terms of genre, gender or location.

But voting is still open until January 23, and that’s the only way to influence the countdown. So if you have strong feelings about the lack of hip-hop, the shockingly low representation of women, or think it’s time for Brisbane-based bands to have their time in the sun again, you best get voting.