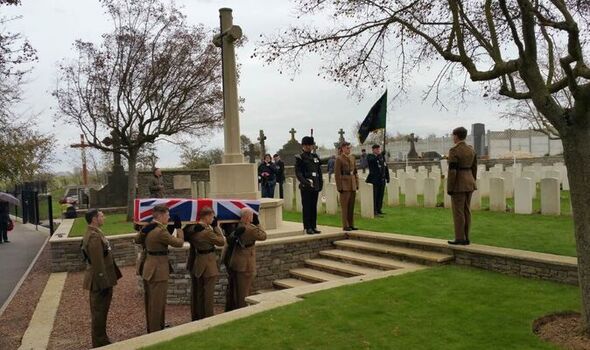 Private Herbert Greaves, 28, died in the Second Battle of Arras in northern France on May 15, 1917. But his remains were only unearthed in 2019 during maintenance near Heninel Communal Cemetery Extension.

MoD staff found his relatives, using DNA testing, but the pandemic delayed a funeral. He has now been laid to rest with full military honours at the cemetery.

Pte Greaves’ grandson David Dickson attended the service and recalled: “When our son read out the email to say they had actually discovered the remains of our grandfather it was quite emotional. He suddenly became a real person to us.

“We connected with our cousin whom we hadn’t seen for many years. He managed to find a photo of our grandfather amongst his father’s papers so we could put a face to the name.”

Born in Sheffield in 1889, he wed Jane and she had two children Herbert and Jane. He was missing in action until his remains were found on a path. David is one of three grandchildren left.

Rosie Barron, of the MoD Joint Casualty and Compassionate Centre which organised the service, said: “Pte Greaves remained missing for over 100 years, although he lay just metres from the entrance to Heninel Communal Cemetery Extension.

“Having come so close to having a known grave, in the heat of war he became lost. He now rests amongst his comrades and his story is complete.

“Although not all of Pte Greaves’ grandchildren were able to attend his burial service, it has been a privilege to meet them and to have played a part in solving the mystery.”

Rev Martin Robbins, chaplain to 9 Regiment Royal Logistic Corps, conducted the service and said that Pte Greaves “typifies the selfless commitment of his generation who put themselves in harm’s way to protect the way of life of others.

“It is only fitting and right that we lay him to rest alongside his brothers in arms, with the dignity and respect he deserves.”

Xavier Puppinck, France Area director at the Commonwealth War Graves Commission, said: “Pte Greaves paid the ultimate sacrifice. It is our honour to be part of the ceremony to lay this brave man to rest.”

Mispronouncing African names is not 'harmless' – it creates lasting damage

The Sweet Tradition Meghan And Harry Follow On Their Anniversaries