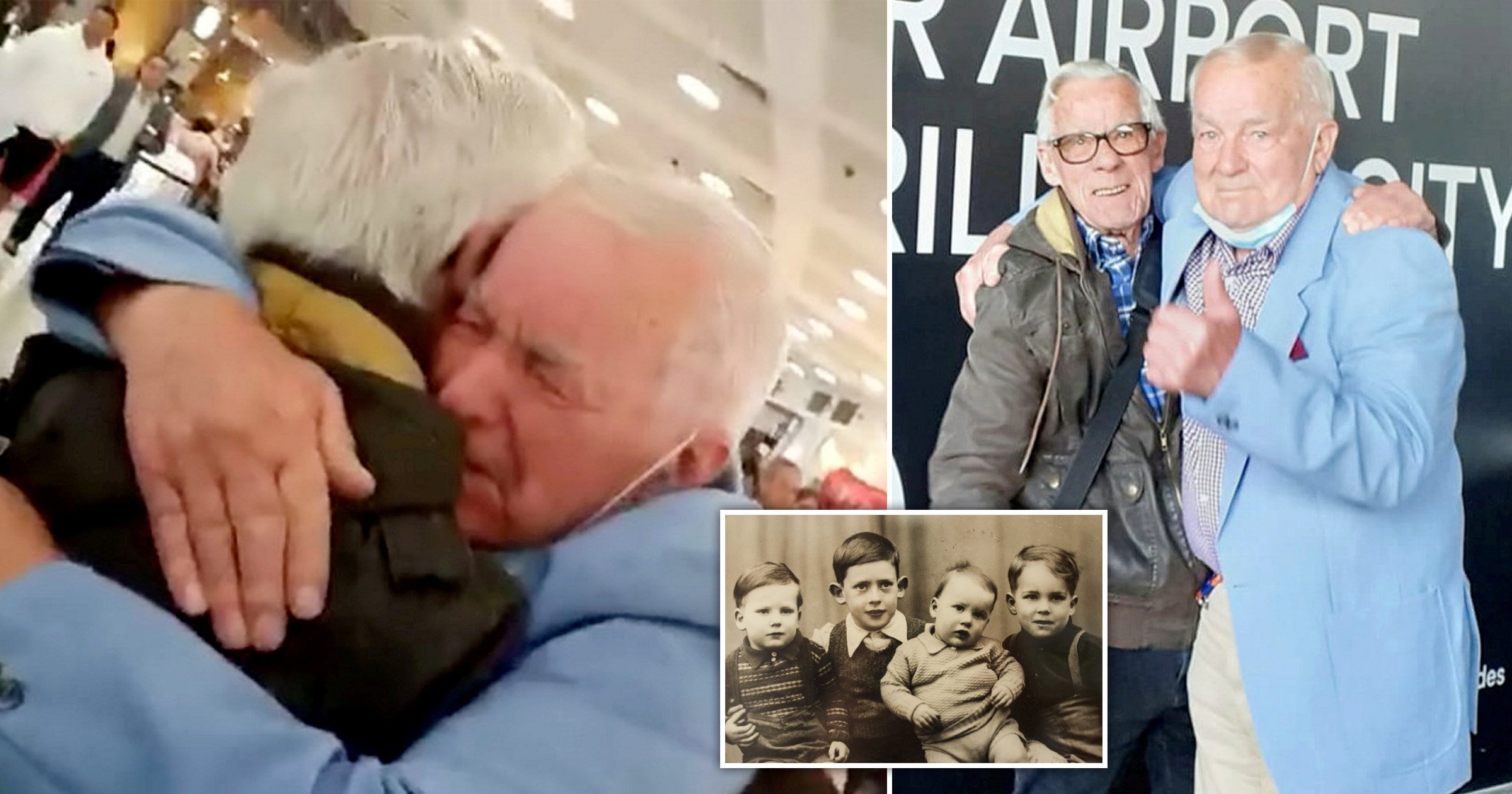 Ted Nobbs, 83, was able to give his brother Geoff, 79, a hug for the first time in decades last week – after 77 years spent apart.

Ted and his other brothers Barry and John were all separated from their youngest brother Geoff after their mum died of cancer in 1945 when she was just 30 years old.

Their father felt he couldn’t cope with caring for all four boys, so Geoff, who was just one year old at the time, was put up for adoption.

After living in Northampton for several years, Geoff ended up moving to Australia with his adoptive family when he was seven and has lived there ever since.

Over the years spent away from his family, Geoff went on to have eight children and eight grandchildren of his own.

Meanwhile, Ted, Barry and John had all tried several times over the decades to find their little brother, but to no avail.

Little did they know that Geoff was trying to do the very same and finally managed to track the three of them down in 2014.

Sadly, this was found years after John, the eldest of the brothers, passed away.

Geoff sent Barry a letter, which led to the family finally being able to speak to each other, over Skype and on the phone, for the first time in decades.

Now, Geoff and Ted have been able to meet in person at last, with Ted flying over to Australia last week.

Ted, from Rugby, Warwickshire, has been spending his trip getting to know Geoff’s family and touring Sydney, which is near Geoff’s home.

Retired factory worker Ted said: ‘It is something that I never thought would happen in my life.

‘It has been an amazing experience meeting Geoff for the first time, it was unbelievable really.

‘I’m stopping with Geoff currently, we’ve been having days out and getting used to Australia, and then we’re off sightseeing.

‘It really is something I never thought I’d get to do. I’m here for three weeks and determined to make up for lost time.

‘It absolutely crunched me when he found us, I just didn’t think it would happen. There were a few tears shed.’

Geoff said: ‘It was an overwhelming experience, it was amazing really.

‘To think I’ve finally met my brother, it’s just beyond me.

‘I’ve been showing Ted the sights, along the coast and then we’re off up towards the Great Barrier Reef this week.

‘It’s been really emotional and I couldn’t wait to give him a big hug. We’re certainly going to show him a good time while he is here.’

Grandfather-of-three and widower Ted has taken the 22-hour flight by himself as Barry is now sadly too ill to travel.

Barry, 81, a former assistant manager for an engineering company, lives in Ripon, North Yorkshire, with his wife Winifred.

He said: ‘I’m extremely happy for them but quite envious of Ted being able to go.

‘I can’t sit down for long enough, it’s quite just heart-breaking as I just want to give him a hug – but it’s really lovely Ted will be able to do so.

‘I’m just glad we’ve found him after all these years.’

He said: ‘I feel relieved and so happy that dad and Geoff have finally managed to meet up again after a lifetime apart.

‘Dad wasn’t nervous at all, he was just excited, he was absolutely buzzing when he set off from the UK.

‘The trip means so much to him, I think after all the lockdowns, Covid delays and travel issues he was fearing it would never actually happen.

‘When the brothers found each other and got in touch a few years ago, after searching for so long, dad said it felt like winning the lottery.

‘So to now go and meet up face to face – well, you can see from the video just how much it meant to both of them.

‘It’s a massive deal for dad to fly out there on his own too, after we lost mum last year who’d had a big part in planning all this – she’d be so proud and happy that it’s become a reality.

‘It’s a shame all four brothers couldn’t be part of that big reunion hug, but I’m sure there’ll be plenty of photos, videos and memories to share with Barry when dad returns home.

‘I think we’ve all got a little bit of disbelief that it’s now become real.

‘Geoff’s over the moon too, and has been enjoying showing his brother around his part of the world and introducing him to his family.

‘There’s also Geoff’s granddaughter’s wedding for them all to look forward to.

‘I’ve told dad to enjoy every precious moment of this trip as it will soon fly by.

‘We’re so grateful to Geoff and all of his family who have put in a lot of effort to make dad feel so welcome out there and make his visit unforgettable.’