Home » Lifestyle » Buoyed along on a rising tide of goodwill

There’s a robust tradition of musicals that set out to incorporate reality rather than escaping from it, and this is the latest example. It’s a filmed version of the Broadway hit set in Gander, the tiny Newfoundland town that had to accommodate 7000 international flight passengers after the 9/11 attacks.

Immediately after the disaster, US air space was shut down, and when Canada undertook to open up to flights still in the air, the people of Gander and its neighbouring towns got to work organising food and shelter for the diverse crowd about to land on their doorstep. In the days that followed, eyes would be opened, friendships formed and overwhelming tragedy would be leavened with hope and generosity. 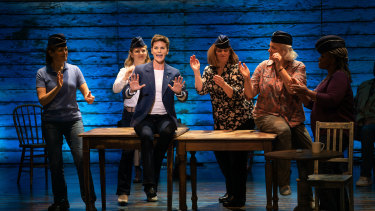 Come From Away is part of the valiant tradition of moving towards real life rather than escaping from it.

These events have spawned a show descended from a long line of musicals graced with political awareness. George and Ira Gershwin’s Porgy and Bess was probably the first, breaking new ground with its all-black cast and a libretto devoted to what it was like to poor and black in America’s South.

Forty years later, Tim Rice and Andrew Lloyd Webber gave the genre another boost with Evita and more recently, Hamilton has taken it right to the top by packing a comprehensive history lesson into a parcel decorated with rap, soul and R&B, along with a few discreetly inserted tributes to musicals gone by.

With a cast of 12 valiantly filling two or three roles each, Come From Away was conceived with more modest ambitions but it too extracts success from the fact its upbeat message springs from such an unlikely source.

It was born when writers Irene Sankoff and David Hein travelled to Gander and the other towns on the 10th anniversary of 9/11. During their interviews with the townspeople, they collected hours of anecdotes that they condensed and re-arranged to shape their libretto. Some of the characters are composites of the real Newfoundlanders and a few fictional adjustments have been made but the central themes are drawn from life.

First up is a geography lesson with a chorus of Welcome to the Rock, a song that pinpoints Newfoundland’s remote perch on the edge of the Atlantic. It’s a rousing and slightly tongue-in-cheek piece of musical exposition that fixes the town in your imagination and introduces a few of the most prominent characters but their stories emerge much more gradually, played out in glimpses rather than full realised sub-plots.

This means it’s not a show out to dazzle with show-stopping production numbers. The only solo memorable for its marriage of lyrics and melody goes to Jenn Colella, who won a Drama Desk Award for her role as Captain Beverley Banks, pilot of one of the grounded aircraft.

There’s a dash of A Chorus Line in Me and the Sky, her song about the long road she had to take to claim her place in the air and the joyous obsession which took her there. But it’s the only song that soars. Nor are there any dance numbers to take the breath away. Like so many modern musicals done in recitative style, this one has a tempo that never moves beyond a rolling boil.

It flows on a slowly rising tide of goodwill as prejudices and preconceptions are abandoned and locals and newcomers realise just how much they have in common. It’s cheering but you miss the exhilaration that comes from a show in which song, dance and spectacle work in tandem.

In hindsight, some now criticise Porgy and Bess as a work “of cultural appropriation”. Nonetheless, Miles Davis, Billie Holiday and Ella Fitzgerald are just a few of the great African-American artists who have responded to the beauty of its score with their own versions of its songs. Whatever their context, they still lift the spirits.

Ashley was originally going to direct a fully realised film of the story, preserving the sense of reality with a cast of lesser-known actors and Gander’s residents serving as extras. Covid-19 cancelled that plan but here’s hoping that it will be revived in time. It’s a story that deserves re-telling. It has a lot to say.