Home » Lifestyle » By calling out anti-Semitism on the Left, Albanese has created room for himself

Anthony Albanese has shown he is no Jeremy Corbyn.

For those who have been paying attention, he has never showed any signs of behaving like the former leader of the British Labour Party. 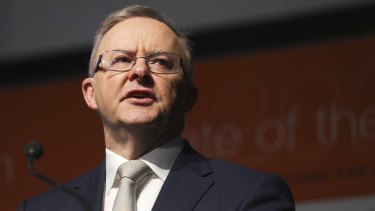 Labor leader Anthony Albanese has moved to stamp out anti-Semitic views in the Labor Party.Credit:Alex Ellinghausen

Albanese has a long history of standing up against the more extreme elements of his party’s Left, including campaigning against the former Marrickville council’s boycott of Israel over a decade ago.

But in a Zoom call hosted by the Executive Council of Australian Jewry on Tuesday night, Albanese, himself a prominent member of the Left, sent an important message to the wider Labor movement – that anti-semitism is a scourge he will not stand for and it is separate to the complicated foreign policy issues thrown up by the Israeli Palestinian debate.

The anti-semitism that terribly afflicted the British Labour Party – aided and abetted by Corbyn – festered for years because of a lack of leadership in British Labour in rooting it out. It was a major contributor to Corbyn’s failure as leader and a legacy now confronted by his replacement, Keir Stamer.

The recent violence in Israel, Gaza and Jerusalem has again put a spotlight on the growing divide within Australian Labor, with some MPs wanting Albanese to play more of a leadership role.

Albanese said during the call he was “deeply concerned” about the apparent re-emergence of anti-semitism and acknowledged this had been prevalent in the extreme Left.

This does not mean Labor will refrain from criticising Israel when it believes it has misstepped. But if you don’t call out the excesses of your own side then you will have no credibility to do so. The Boycott, Divestment and Sanctions (BDS) movement receives considerable support among some sections of Australian Labor. As a staunch critic of BDS, Albanese should be talking about it and explaining why he opposes the campaign.

One of the many problems with the Israel-Palestine debate is politicians are forced to take sides – they are either pro-Israel or pro-Palestine. It’s a dichotomy that fails to acknowledge the complexities of the situation.

Albanese avoided this trap by calling out wrong doing on both sides. But he also avoided the trap of adopting false equivalency.

He was targeted in his criticisms. For example, he said the “indiscriminate” firing of rockets by Hamas and other militant groups into Israel was “counter productive” but was careful to add that Israel should be criticised for “responding aggressively”. He was also critical of Israel for its annexation of the West Bank, crack-downs in East Jerusalem and the building of settlements in occupied territories.

Albanese and Wong have shown federal Labor will not countenance any creeping march of anti-semitism. In doing so they have left themselves room to make considered, nuanced criticisms of Israel when they think it is warranted.

It is everything that British Labour was sorely lacking.

Michelle Carter Victim's Family Speaks Out After Her Prison Release