Nightclub owner Donna, from Bury St Edmunds, Suffolk, wanted to add touches of colours to her grey, monochrome room, and mentioned she liked pink at the beginning of the Channel 4 show.

Designers Jordan Cluroe and Russell Whitehead decided to go all out and painted the bedroom pink and red and added a large, circular bed in what they called ‘an ode to Changing Rooms.’ They added they took inspiration from the film Pretty Woman, because Donna had red hair, like its star Julia Roberts.

The finished bedroom had tile-effect carpeted floors in three different shades of pink, lamps made of fake nails, and a circle bed right in the middle of the room. The walls had a light pink base, with large purple an red circles painted randomly around the room. 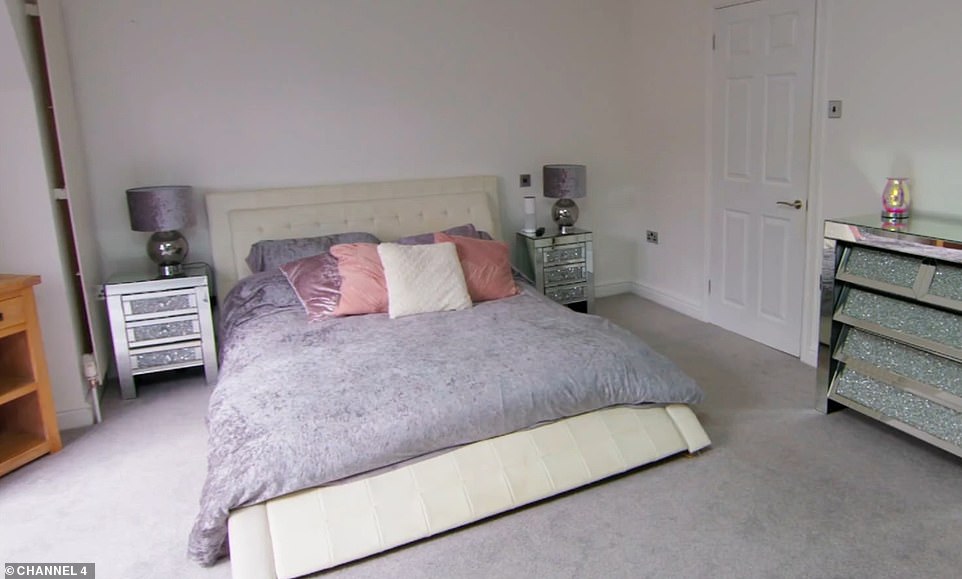 BEFORE: Nightclub owner Donna, from Bury St Edmunds, Suffolk, wanted to add touches of colours to her grey, monochrome room, and mentioned she liked pink at the beginning of the Channel 4 show 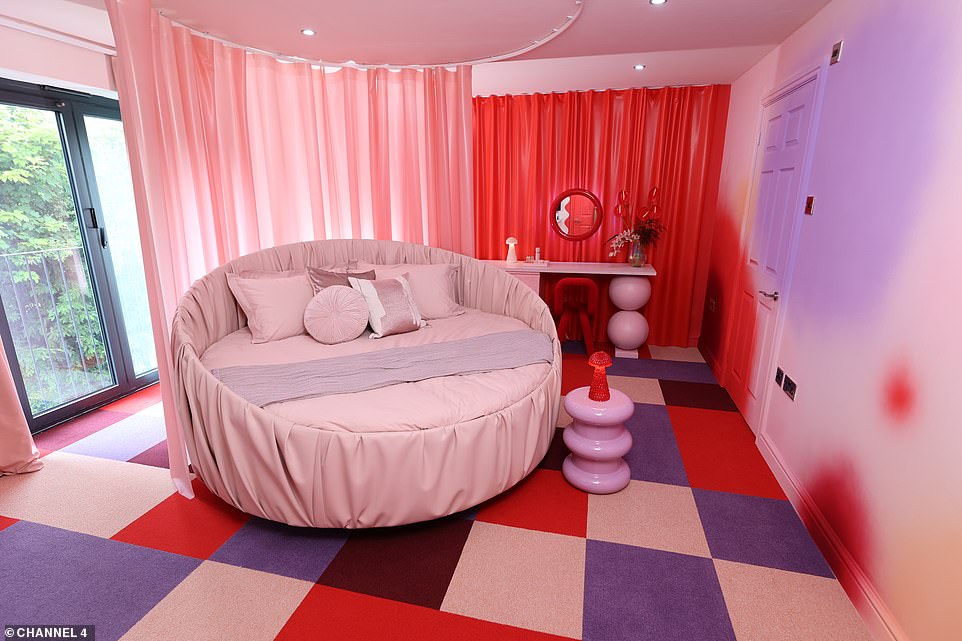 AFTER:  Designers Jordan Cluroe and Russell Whitehead decided to go all out and painted the bedroom pink and red and added a large, circular bed in what they called ‘an ode to Changing Rooms’

Viewers were not impressed with the makeover of Donna’s room, and said both rooms featured on the show were ‘hideous’

Many of those watching said the design was one of the worst they had seen on the show, and some compared it to ‘a virus’ or a ‘Barbie nightmare.’

One tweeted: ‘I don’t think I’ve seen anything quite as hideous as that bedroom.’ Another added: ‘State of that bedroom, wtf have they done to them walls.

A third wrote: ‘The whole show is incredible. It’s just one big fever dream at this point.’

At the start of the show, nightclub owner Donna and her sister Sarah admitted she had played it safe with her bedroom, which was painted in neutral shades of grey, with grey carpet, a grey chest of drawers, and blush pink velvet cushions.

Jordan and Russell, helped by Donna’s friends and neighbours Jamie and Leanna, decided to go for a vibrant pink theme after Donna said she liked the colour.

They put the bed in the middle of the room, and used rechargeable lamps. Inspired by an Alexander McQueen creation, they covered the small lamps in nails to add some more personality to the bedroom.

The designing duo also picked a quirky table where Donna could do her makeup, and picked draping pink and red curtains hanging from the ceilling. 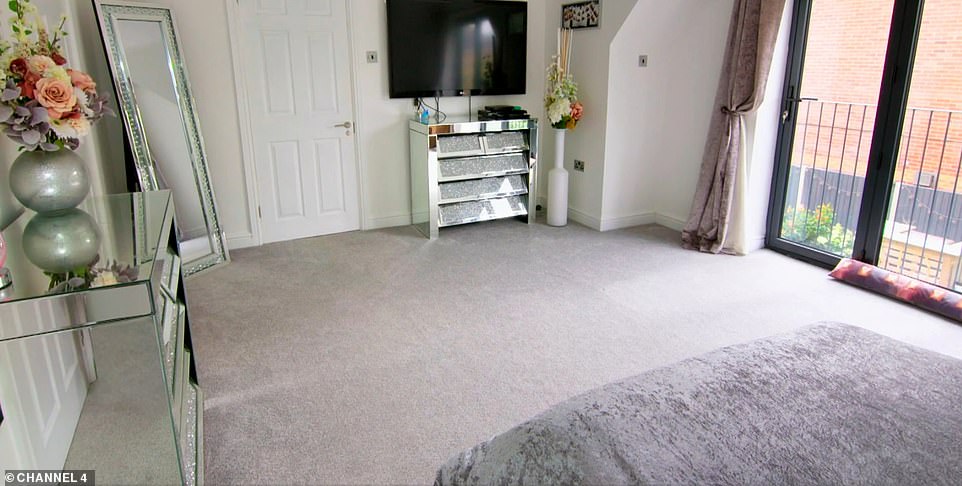 BEFORE: The room was decorated with neutral tones. Donna had white walls and a carpeted grey carpet, but admitted she wanted to add more colour to her room 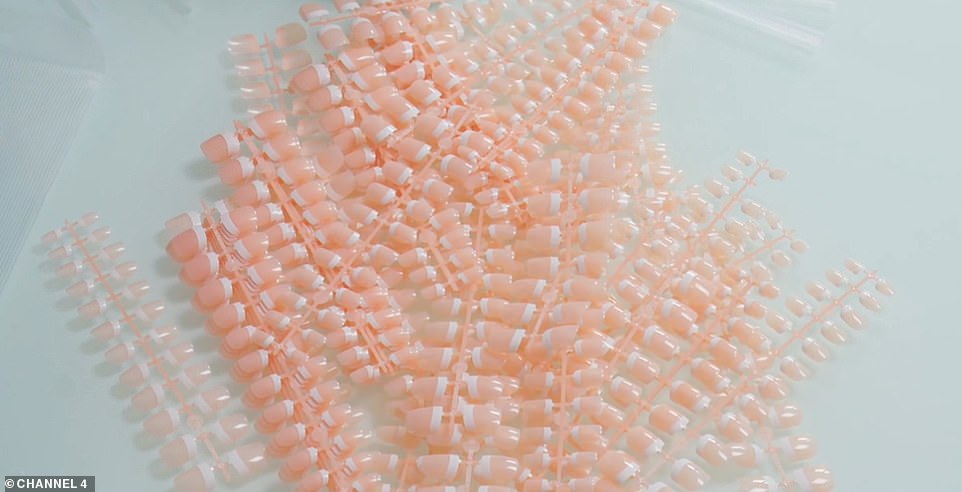 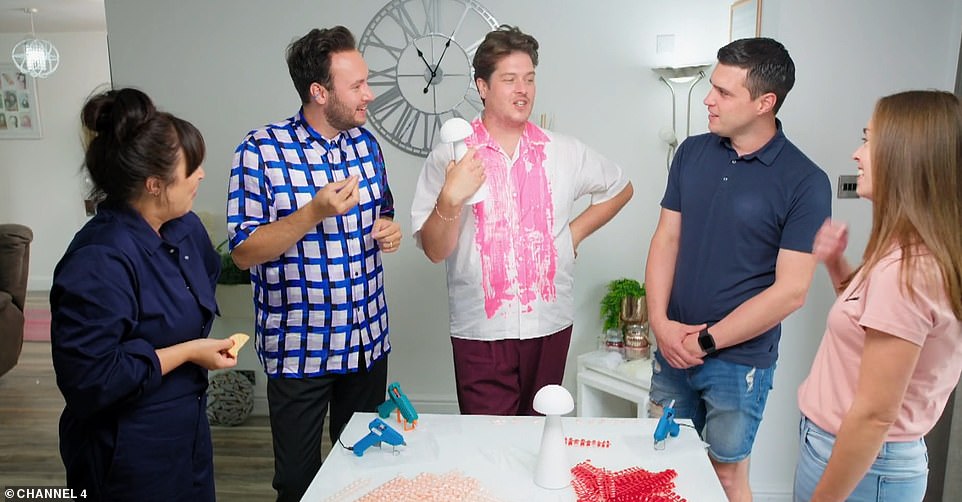 Getting crafty: Designers Russel and Jordan, pictured, showed Anna Richardson, Leanna and Jamie, right, how to create lamps out of nails, pictured

The reveal was a shock for Donna, who was left speechless by her bedroom’s transformation.

‘Oh my word. I love it,’ she eventually said. ‘Everything is so different,’ she added, while her sister Sarah said: ‘It’s out there, isn’t it?’

Anna Richardson said: ‘Your neighbours and your friends wanted something that reflects who you are. Because look at you! You’re an amazing, vibrant woman.’

Donna replied: ‘I would never have chosen that. I’m taking it all in.’

Russel and Jordan, who had been hiding in the closet, listening to Donna’s reaction, came out to discuss their design choices with her.

‘It is a fantasy room, we wanted to give you a fantasy, something that makes you feel fabulous about yourself,’ Jordan said. ‘Pretty Woman was a big influence. We wanted you to feel gorgeous. 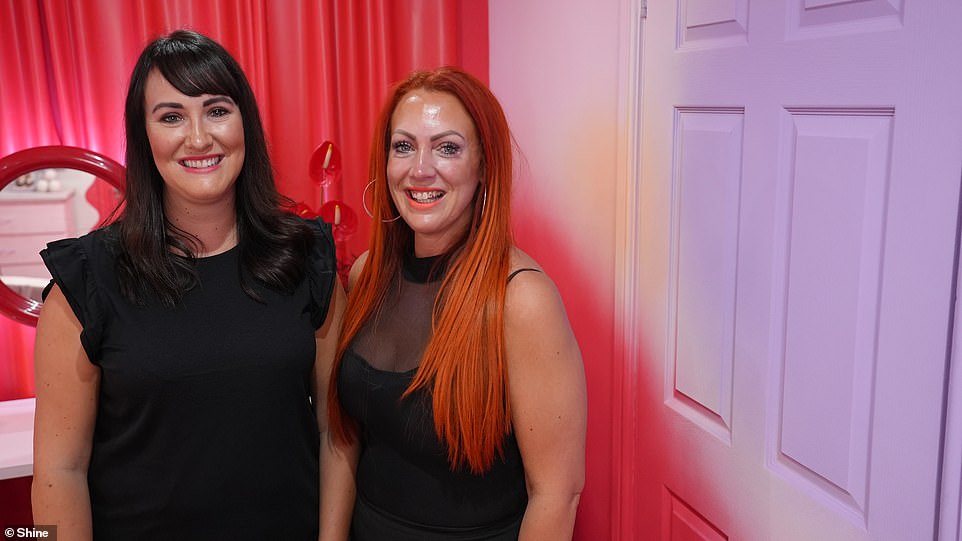 Design duo: Donna, right, appeared on the show with her sister Sarah, left, who admitted the room looked ‘out there’ after seeing the end result

While Donna was satisfied, her friends Jamie and Leanna did not seemed as enthused with their new living room, which had been designed by Laurence Llewelyn-Bowen.

While the couple had grown tired of their ‘boring’ living-room in neutral tones, they had specified they didn’t like dark colours or clutter.

But the designer decided to trust his gut and painted the walls dark green, creating a grass wall and picking bright blue armchairs to add a burst of colour.

On seeing the new room, Jamie said: ‘Wow… Jesus… I did not expect that.’

Leanna said: ‘This does not look like our room at all… I think I like it, it’s just so different… It’s like you just took us into a showroom.’ 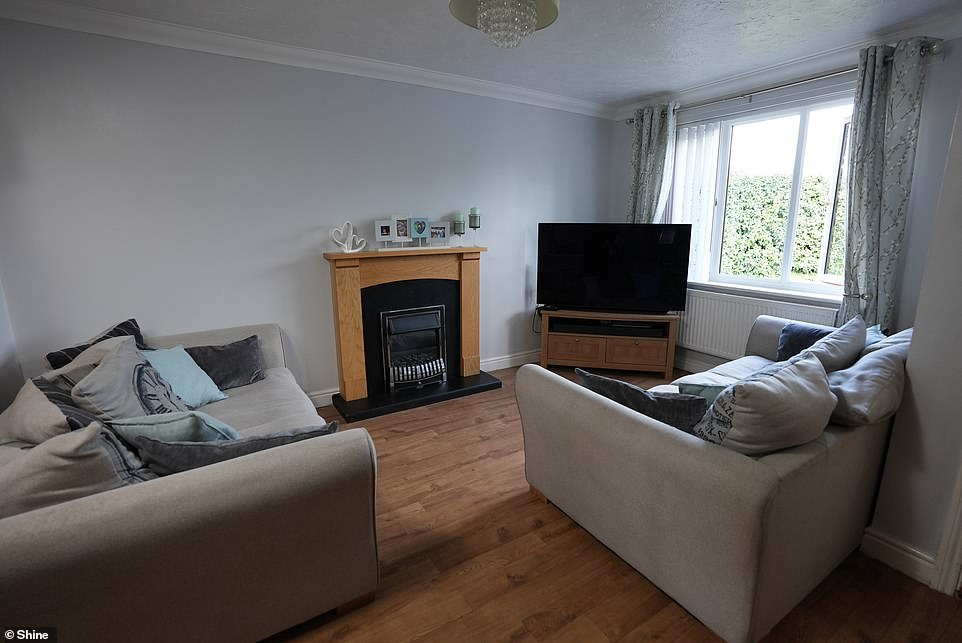 BEFORE: Meanwhile, couple Leanna and Jamie were tired of their plain living-room, which was also decorated in neutral tones and beige and grey 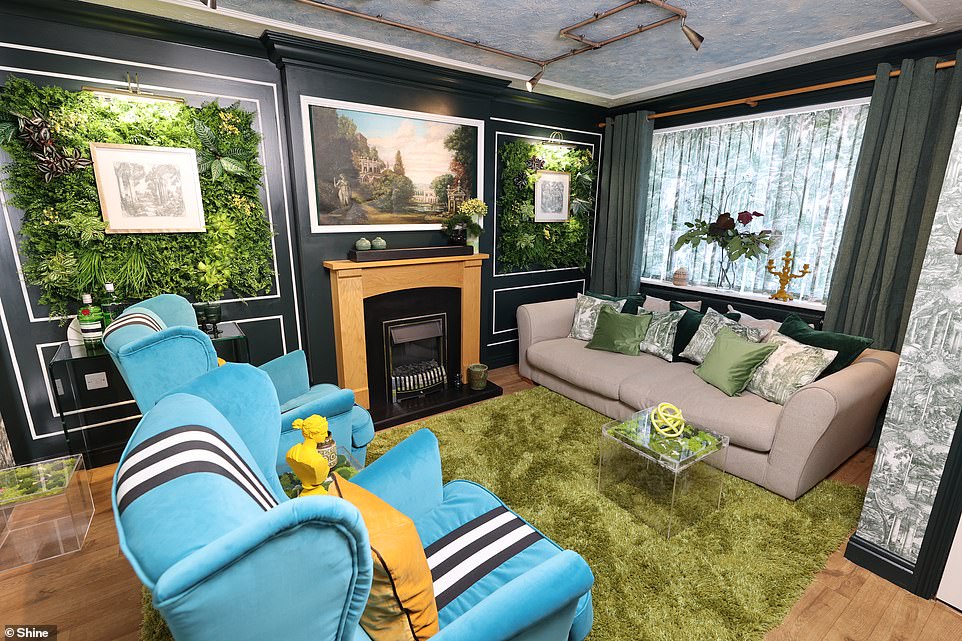 AFTER: Designer Laurence Llewelyn-Bowen picked a bold dark and lime green scheme for the room and picked eye-catching blue armchairs and moss accessories

Viewers were not convinced by either of the makeover, but were particularly disappointed by Donna’s room, comparing it to ‘Barbie nightmare’, a ‘fever dream’ and a ‘virus’

More Than 100 Dogs Rescued from South Korea Dog Meat Trade and Flown to the U.S. for Adoption