Time travel is so complicated. About 30 years into the future, Chris Pratt, as Dan Forester, saves the world with the aid of a brilliant female scientist, except that she won’t become that if he doesn’t … and he can’t quite … so she might not … and anyway how come they can be in the same time frame together and she is 30 years older and he isn’t? Not to mention that old caution that you must not monkey with the future. 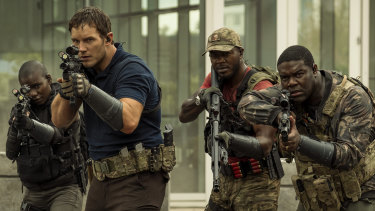 Luckily, logic and plot don’t matter in a BLAST movie. You know this kind of film, something so Big, Loud And Stupid that you turn off the cognitive engine and float along on the sensations, enjoying the sights and sounds as the cast battles the latest brand of CG alien – here called Whitespikes, because they shoot deadly darts from an orifice on the end of their tentacles (I guess the producer vetoed “Shitespikes”).

Derivative is not a pejorative term here: it’s a production guideline. The movie cuts and pastes from every alien bug-hunt movie of the last 40 years, and then some: the icky egg-laying bitch from Aliens, the rebel base from Star Wars, the science lab silliness from Independence Day, seasoned with the climate change politics of The Day After Tomorrow.

Australian actor Yvonne Strahovski plays the grown-up version of Dan’s daughter Muri, with admirably straight face. At one point, she and Dan are climbing burning gantries on a fortified oil drilling platform and I wondered – who in the hell would want to copy something from Waterworld?

Pratt does his usual thing: biff, bash, stare, give short rousing speech. He’s likeable in a boyish way. He has the physique and and bone structure of a young Charlton Heston, but with more humour. Dan is a high school science teacher and ex-Green Beret, conscripted to fight the aliens from the future, in the future. Humans have apparently worked out how to jump back and forth in time without a DeLorean, even if it is still beyond us to make a script even minimally intelligible.

COVID has produced some strange outcomes. This was originally a big screen Paramount production headed for a big cinema release last Christmas; then it was bumped to July 23 this year. Then Amazon offered somewhere near US$200 million for the rights and premiered it this week on the small screen. No matter: today’s screens are so good that you can feel the earth move at home, with a good set of speakers. You can also stop and rewind for some of the hilariously bad rousing speeches, or to enjoy the (surprisingly good) alien slapdowns. Cinemas may be closed, but we can still have spectacles to go with our masks.

Queen opens the new headquarters of the Royal Philatelic Society

The Heartbreaking Backstory Spider-Man and Other MCU Heroes Share