Architect, 64, and his wife transform expansive £485,000 village HALL built as a school house in 1894 into stunning family home on George Clarke’s Remarkable Renovations

An architect and his wife revealed ambitious plans to transform a £485,000 village hall into a stunning family home on George Clarke’s Remarkable Renovations tonight.

Stuart, 64, from Northamptonshire, bought the former village school, built in 1876, from the council in Greens Norton in 2019 and vowed to make it a forever home for himself and wife Theresa to enjoy.

With a budget of £200,000, they set about transforming the space with a deadline of seven months, insisting they and their son Jamie would do much of the labour work themselves in order to keep the costs low on the extensive renovation.

However it wasn’t long before cracks appeared between Stuart and Jamie, with the pair clashing over the standards of the work required.

At one stage, months before Jamie said his dad was ‘like a bear with a sore head’, adding: ‘There’s a million and one things going on, and not all of it can be in my control.

‘Every day at the minute seems to be something else I’ve done wrong. But here we are, we’ll carry on.’ 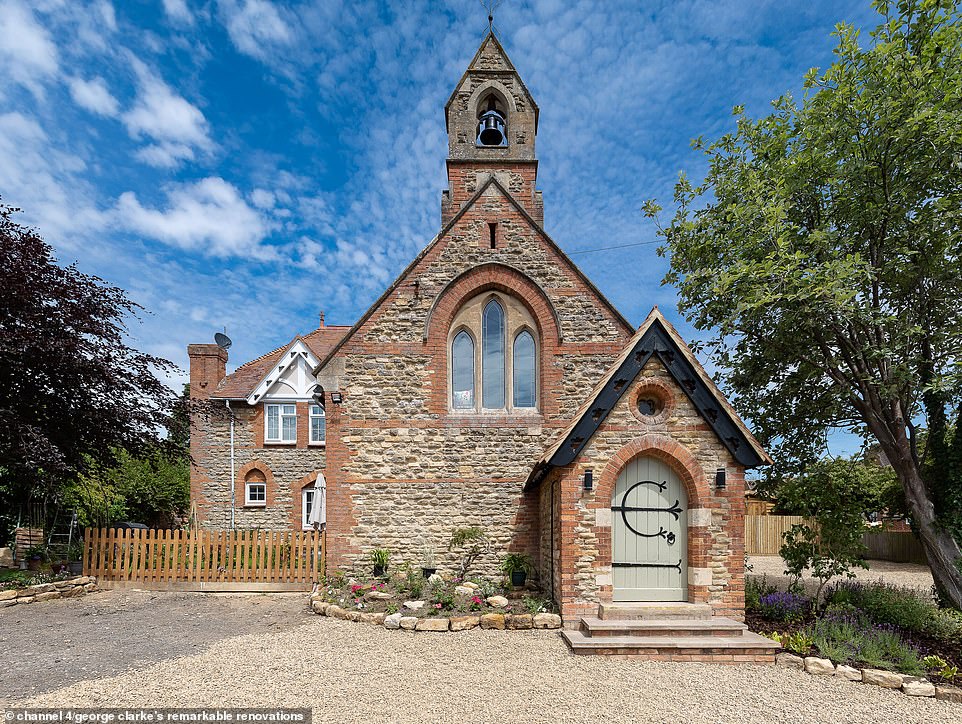 Architect Stuart, 64, from Northamptonshire, transformed an expansive £485,000 village hall into a family home on George Clarke’s Remarkable Renovations tonight (pictured, after the transformation)

Built in 1874, the then school building was designed by Swinden Harris, a local architect with a passion for Arts and Crafts architecture.

When it opened, there were just 43 pupils but this quickly tripled. The school began bulging at the seams and an extra classroom was added.

By 1966, the children were moved to a new site and the building became a village hall.

After nearly 250 years serving the village residents, it was put up for sale in 2019 when Stuart and Theresa saw the opportunity to buy the historic property along with the neighbouring cottage for £485,000.

Stuart is an architectural designer and owns a building firm, where he employs his son Jamie. Combined the pair have over 60 years experience in the industry.

When George first met the couple in 2019, Theresa explained: ‘It has attracted a lot of attention. Loads of people, whenever anyone walks past, someone says they’ve been born here or gone to school here.’ 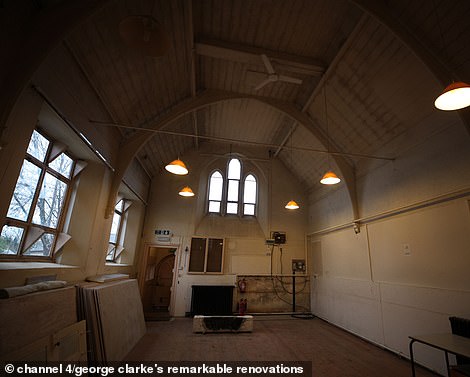 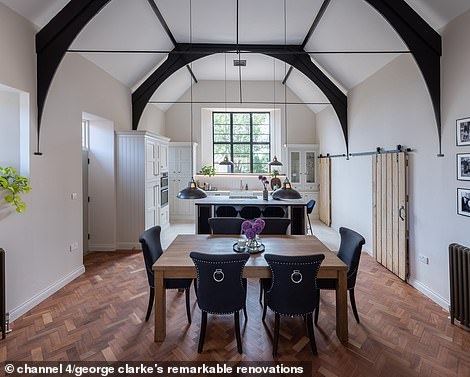 Stuart bought the former village school, built in 1876, from the council in Greens Norton in 2019 and vowed to make it a forever home for himself and wife Theresa to enjoy (left, before, and right, after)

Stuart said: ‘My sister lives in the village and we were downsizing anyway so she said, “Oh you ought to look at the little cottage attached to the village hall.”

‘But then when we finally came over, we just fell in love with the space.’

‘And so that we could finance the whole thing, we sold the cottage to a very good friend of ours.’

He added: ‘It should be a walk in the park if we could just get on with it.’

And the couple were quick to show the presenter around inside the building, with George saying: ‘That is beautiful that, it’s like being in a small banqueting hall.’ 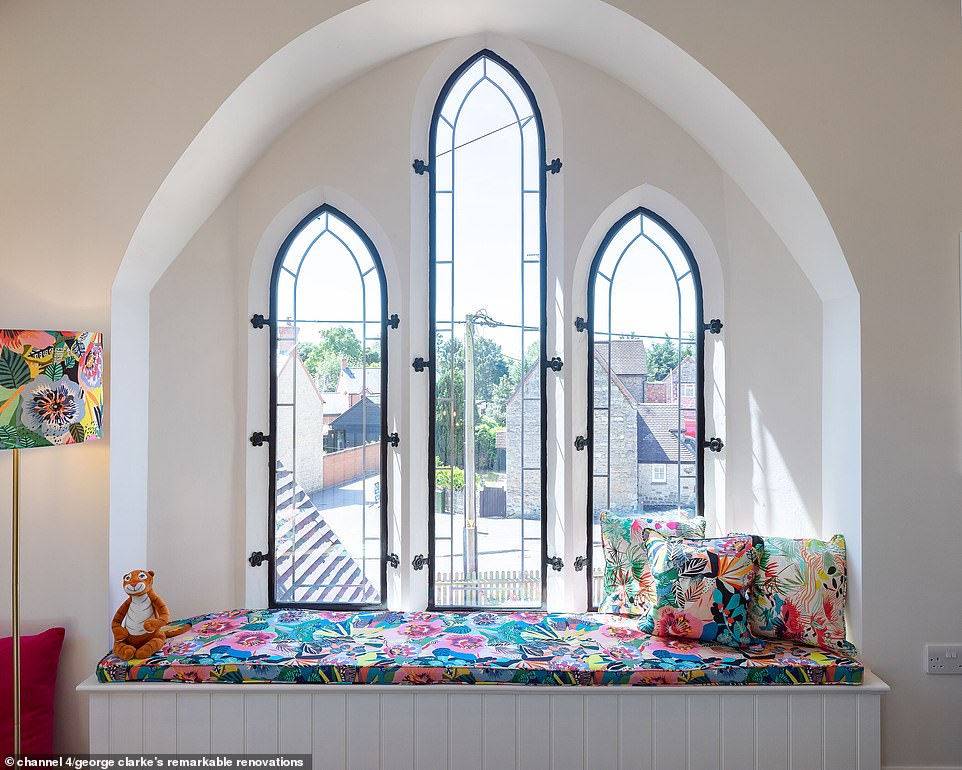 With a budget of £200,000, they set about transforming the space with a deadline of seven months and were determined to keep the original features of the building (eg. the arched windows)

Stuart explained there would be an open plan living space, with a kitchen and living room, while he would install a mezanine to act as a play area for his grandchildren.

Meanwhile downstairs would also have a separate bedroom, while a second floor would have two spare bedrooms with a bathroom.

The scale of the village hall made it perfectly for community events – with two double height spaces in the main footprint which were originally used as classrooms.

Beyond the main hall is an earlier 20th century addition, build to accommodate an old infants school. There was also a 1960s toilet block.

Stuart said: ‘We’ve had to excavate a lot.’ 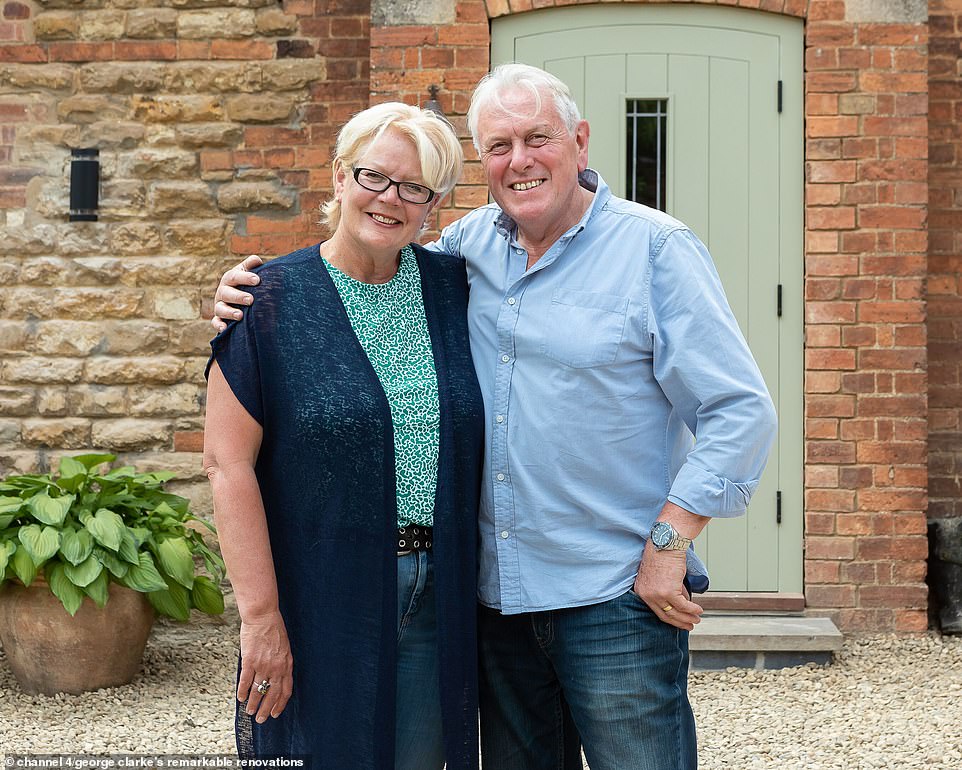 Stuart, who is an architectural designer and owns a building firm, bought the property with his wife Theresa in 2019 from the council

The couple were knocking down the extension, and instead planned to build a small garden room leading off the kitchen diner.

George said: ‘I love you two, you were downsizing and you’re extending.’

Throughout the project, Stuart and Theresa made the brave decision to stay in a caravan on-site. Although it would help the budget, it also added extra time pressure.

They said they hoped to finish the project within seven months, with George commenting: ‘You’ve got all the experience, all the family, all the trades…’ 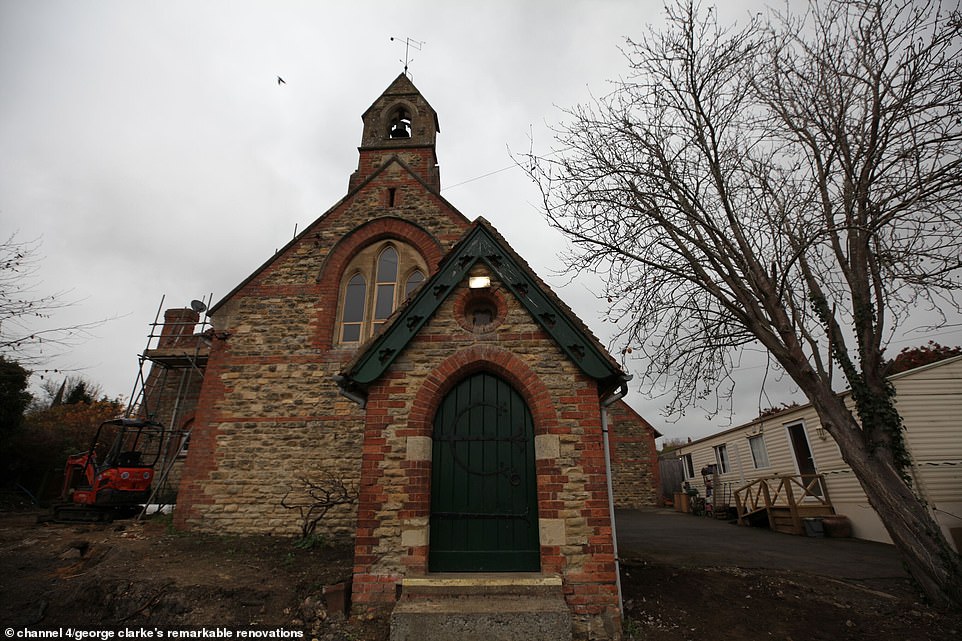 The couple were determined to transform the space and restore it to its former glory – and in order to keep costs low, decided to stay on-site in a caravan 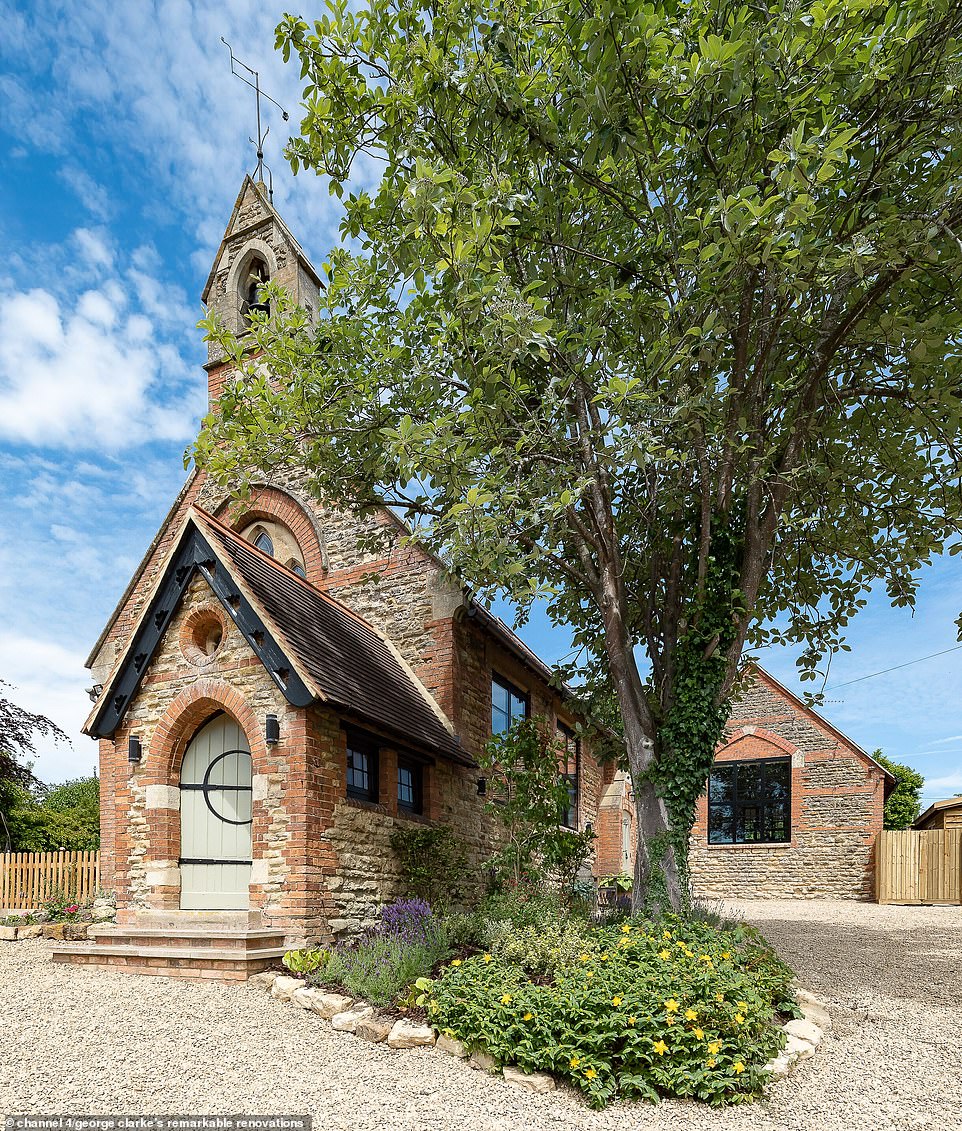 By December 2021, 45-year-veteran of the industry Stuart, Theresa and their son Jamie wasted no time in putting in the work to convert the colossal space (pictured, after the renovation, with the new extension)

‘But I think with me doing a lot of labour on the weekends, we’ll get there.’ He said he planned to be ‘very hands-on’.

By December 2021, 45-year-veteran of the industry Stuart, Theresa and their son Jamie wasted no time in putting in the work to convert the colossal space.

Stuart also wanted to salvage as many of the original features as possible, including keeping the slates on the roof.

Stuart said: ‘It’ll be nice to have all the demolition done for Christmas, then after that we can start thinking about new floors and rebuilding.

‘We have got a bit of a project to get this finished for June though, because Jamie is getting married in then.’

The family had to demolish two extensions, but it wasn’t long before tensions emerged between Jamie and Stuart. 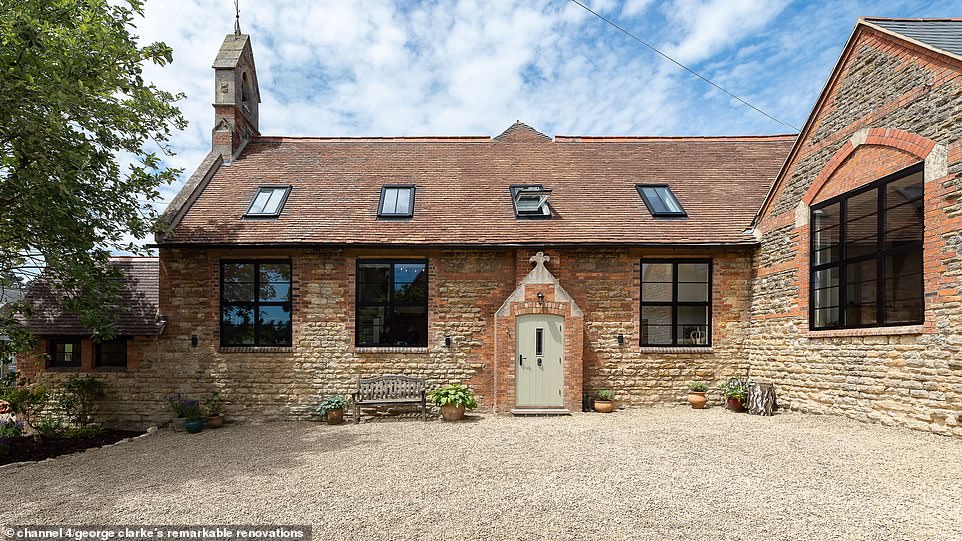 Jamie confessed: ‘There’s always pressure when dads involved. I like to have my say, and he likes to have his say. Nine times out of ten, it’s normally dad’s way but I still think I’m right.’

A week later, the last of the 1970s block was coming down. But with Stuart called away on business, Jamie was in charge.

He said: ‘Dads gone to London, he said it’s for business… I think it’s more of a jolly.

‘He normally let’s me have pretty free reign but he likes to have the final say in situations. This stuff it’s not too bad with, but this is just knocking down. So you can’t go too wrong with it.’

Four weeks later, demolition was complete and the rebuild began.  Stuart began laying the concrete floor across the hall, saying: ‘It’s a good job to have done.’

By February 2022, attention had turned to the inside. Planning for later life, the couple wanted to put all of the rooms they would need on the ground floor. 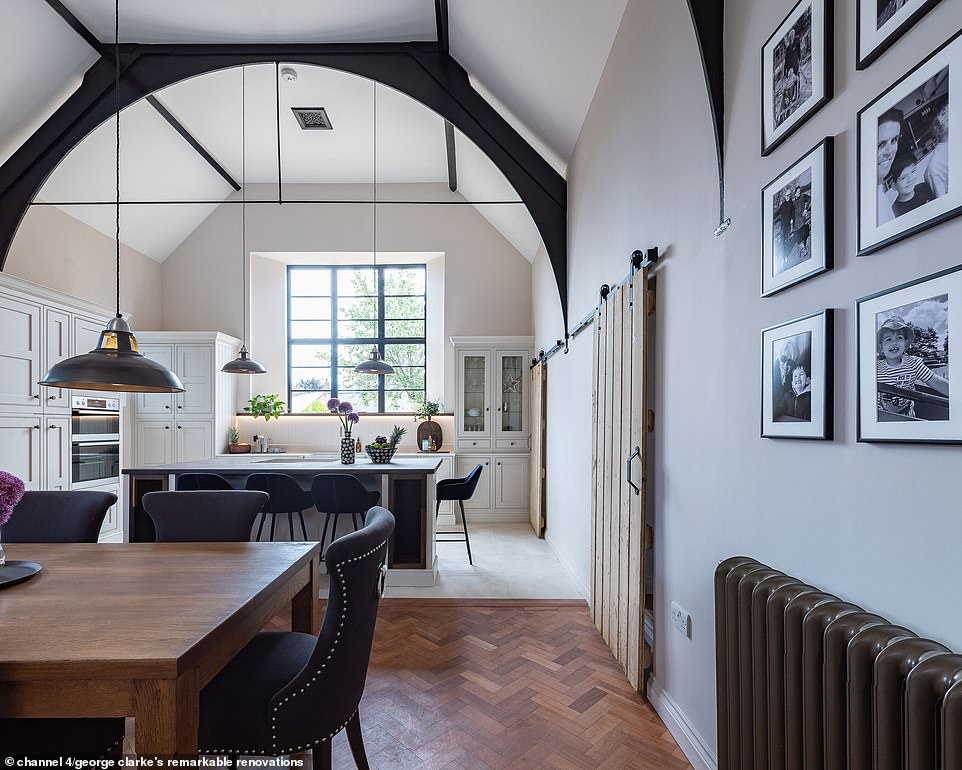 Planning for later life, the couple were keen to create an open-plan and comfortable living area on the ground floor of the village hall

But dividing up the main hall, Stuart began to have doubts, saying: ‘Now we’ve put the stud walls up, it has closed off that main area a bit. I’m still not sure how the head room is going to work.’

George said: ‘This was just one big village hall space, and now your eye is just drawn to the top. You couldn’t be doing a better job at the minute, no pressure!’

Jamie said the deadline was final, adding: ‘The wedding is two minutes down the road and loads of people want to stay here.

‘Dad is more stressed than he makes out. It’s the pressure of running this job alongside seeing his clients, doing surveys, doing drawings – and he’s got all this in the background.

‘If he was here constantly, sleeping here and working here, it might drive him crazy. So it does do him good if he goes into the office.’ 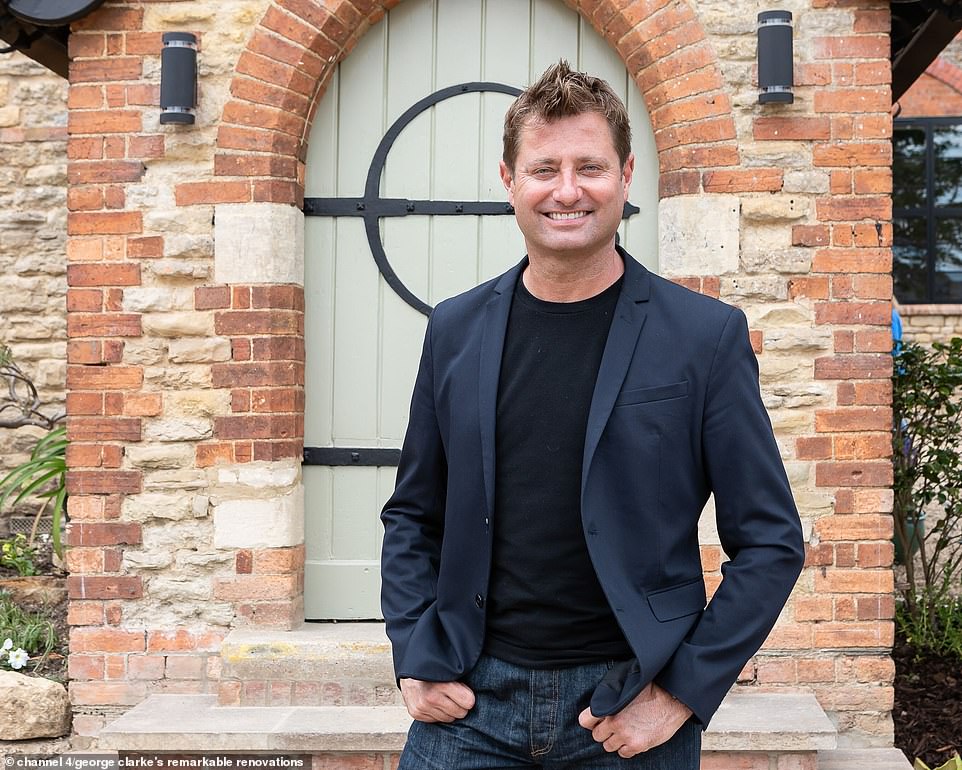 Meanwhile Theresa confessed costs were rising and she kept ‘gasping every time she saw an invoice’.

Stuart said: ‘I’m pretty sure we’re going to go over. It’ll all be what we choose to spend on finishings really. I haven’t got a client saying I like this or that.’

And by April, Stuart said he was feeling ‘under pressure’ to meet the deadline, saying: ‘I’m just trying to keep my head above water at the moment.’ 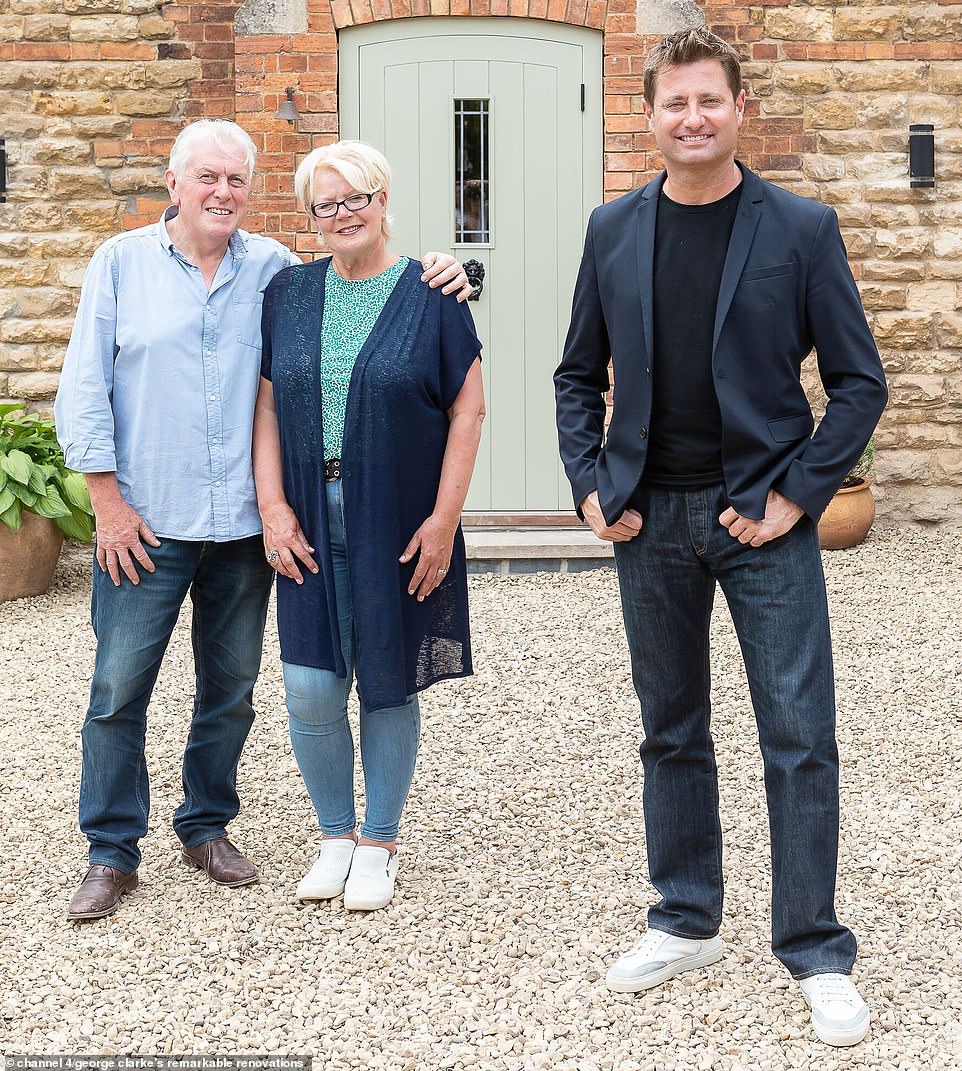 Princess Beatrice’s Wedding Has Officially Been Canceled Due To Coronavirus

SIMON WALTERS: Keir Starmer may be key to slaying the Spartans