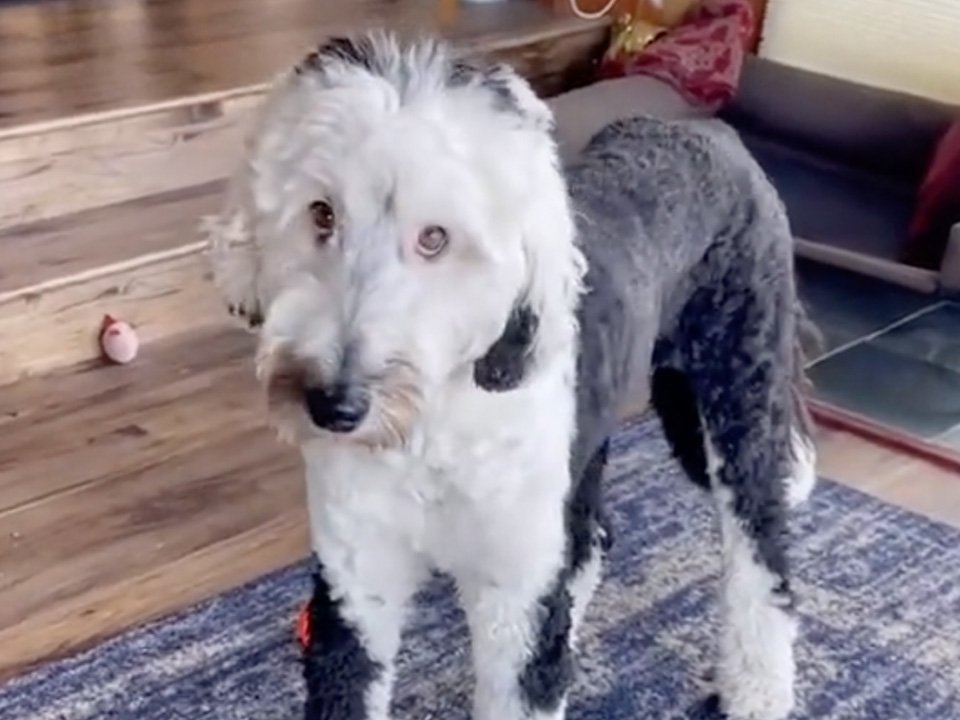 There’s a reason we describe an idyllic period as a ‘dog’s life’ – because nobody can switch off like man’s best friend.

Their minds are too preoccupied with chewing bones and chasing sticks to worry about the intricacies of existence… or so we think.

Bunny, a three-year-old sheepadoodle, was taught to communicate using speech buttons from a young age, and became internet famous for her growing vocabulary.

Starting with a button that, when pressed, said ‘outside’, Bunny learned to alert her owners to all sorts of things, then later to seemingly grasp complex ideas like dreams through their use.

Her skills and fanbase grew, and Bunny can now say almost 100 words using the buttons. A TikTok account set up by the pup’s owner, Alexis Devine, now boasts 8.2million followers.

Yet despite being hailed as a genius, greater self awareness hasn’t brought Bunny a happier outlook, and Twitter users are saying he’s going through an ‘existential crisis’.

Shenae Curry recently tweeted videos of the dog, highlighting that she’s been placed on antidepressants and seems to be dealing with a few issues.

In one clip, Bunny looks in the mirror and asks ‘who is that?’ with her buttons, before repeatedly pressing ‘help’, while in another she expresses concern and asks for medicine.

Past videos show her staring up at Alexis and asking ‘what dog is?’ before moving on to questions about why she’s a dog.

Some speculated that Bunny’s growing consciousness sparked worries over the meaning of life, while others argued she’s experiencing emotions most animals do, although she simply has the ability to vocalise them.

Her story was then compared to Koko the gorilla, who stole the hearts of the world by learning a special form of sign language. And we’re sure many people will see similarities with Mozzarella from Friends, the ‘happiest dog in the world’ who Joey manages to depress with tales of his love life.

Before we all jump to conclusions about Bunny’s situation, though, it’s worth remembering that anxiety is a common issue in domesticated dogs – not just those who’ve mastered cross-species communication.

Sheep dogs and poodles are particularly prone to anxiety, which can manifest as destructive behaviour, crying and whimpering, trembling, trying to escape, or having accidents.

Speaking to Salon about whether Bunny is having an existential crisis or going by the responses she gets from us humans, Federico Rossano, director of the Comparative Cognition Lab at the University of California–San Diego explained: ‘I think there’s a good reason to believe that Bunny is probably capable of a sense of self and recognising herself in the mirror.

‘But to what degree is spontaneous versus learned over repeated exposures, I would say it’s more likely to be the latter than the former.’