Cardi B and Offset have been a go-big-or-go-home couple throughout their relationship. They’ve been dating since 2017 and marked major milestone moments with very public surprises. (Their super secret wedding was one exception.)

Most recently, Cardi B stole the show at the BET Awards with her pregnancy announcement. She and Offset let the whole world know they have a second baby on the way live on stage.

Over the years, the superstar couple has stayed in the spotlight and wowed fans through the ups and downs of their ‘ship. They’ve weathered some rocky moments mixed in with the lovey-dovey updates. Here is everything you need to know about Cardi B and Offset’s relationship, marriage, temporary breakup, and baby news.

January 2017: Cardi B and Offset released their first collab.

At the beginning of 2017, “Lick” brought the duo together professionally. This was months before Cardi’s breakout hit, “Bodak Yellow,” debuted.

Catch that almost-kiss near the end? It became more fodder for dating rumors.

The met back in 2016 and went out on their first public date at Super Bowl LI. Nothing like some nachos, hot dogs, and a record-breaking comeback to kick off the romance! At the time, they told people it was a friendly hang. Later, Offset said it was their first date in an interview with Rolling Stone.

The couple kept their fall wedding a secret for almost a year before TMZ revealed their wedding certificate.

The “WAP” rapper explained why she kept their nuptials under wraps: “There are so many moments that I share with the world and then there are moments that I want to keep for myself! Getting married was one of those moments! Our relationship was so new breaking up and making up and we had a lot of growing up to do but we was so in love we didn’t want to lose each other.”

In true Cardi B and Offset style, Offset got down on one knee on stage during a show in Philly. Yep, one month after their secret wedding. That wasn’t quite shocking enough, though.

The “Bodak Yellow” rapper has since deleted her post on Instagram about the proposal, but fan videos remain capturing the moment.

January 2018: Offset was accused of cheating.

Not only was he accused of infidelity, but Offset was also reportedly involved in a sex tape scandal.

The “Up” rapper later shared a statement regarding the rumors. “I’m going to make a decision in my own times with my heart and mind,” she wrote at the time, per E!. “I don’t need to be rushed or be told what to do. Its my life! I belong to me not to the world.”

Cardi shared more following backlash with Cosmopolitan: “It’s like everybody is coming down my neck like, ‘Why are you not leaving him? You have low self-esteem.’ I don’t have low self-esteem … I know I look good. I know I’m rich, I know I’m talented. I know I could get any man I want—any basketball player, football player. But I want to work out my shit with my man, and I don’t got to explain why. I’m not your property. This is my life … I’m going to take my time, and I’m going to decide on my decision … It’s not right, what he fucking did — but people don’t know what I did, ’cause I ain’t no angel.” 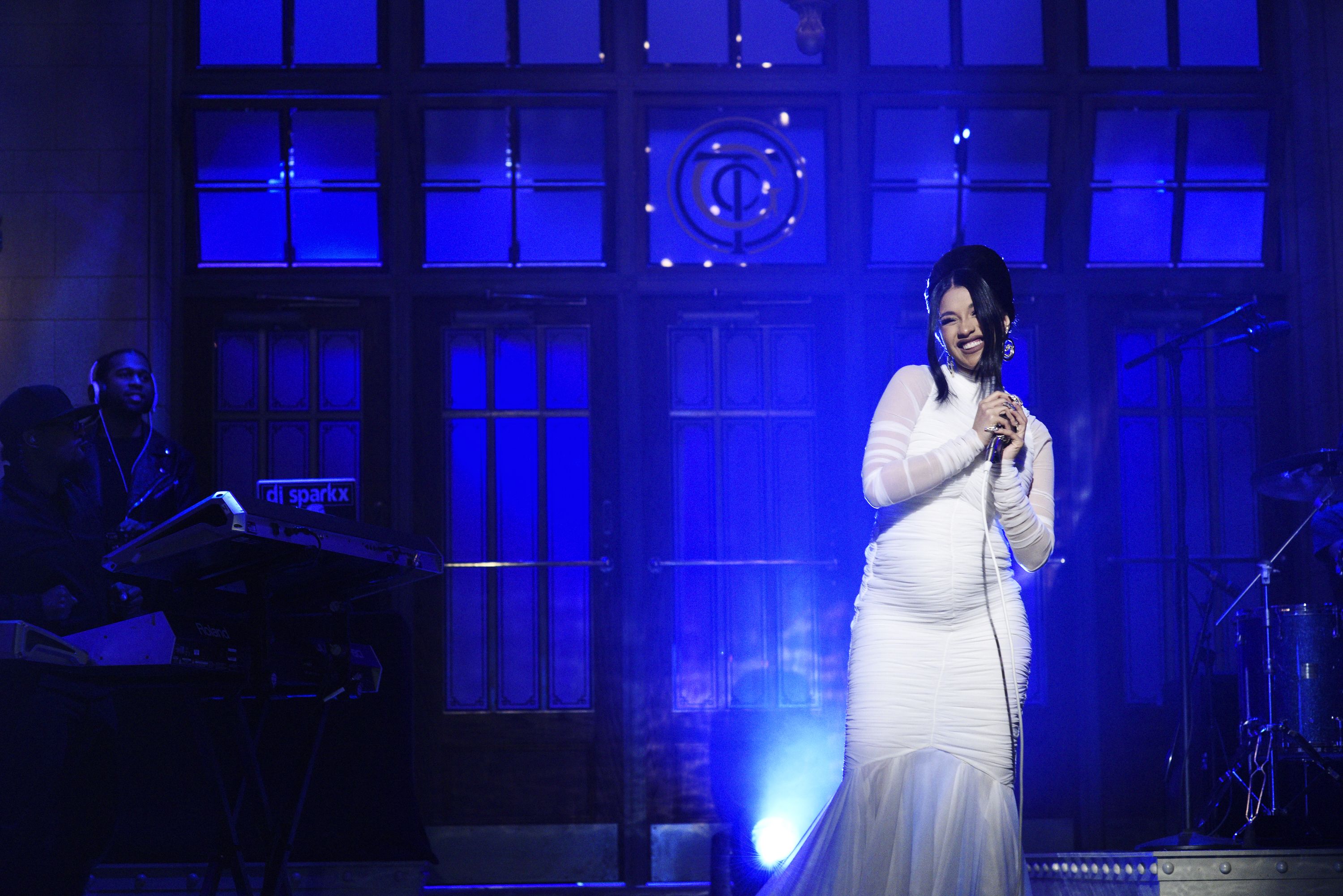 Cardi B used her appearance on SNL to announce she was expecting a baby. During her second song, she strutted on stage in an elegant Christian Siriano white dress that showed off her bump.

June 2018: Cardi B and Offset’s wedding news finally comes out.

ICYMI they got married in a small ceremony before the public proposal, according to TMZ at the time. They kept it a secret for almost a year before news leaked.

The “I Like It” rapper shared: “There are so many moments that I share with the world and then there are moments that I want to keep for myself! Getting married was one of those moments! Our relationship was so new breaking up and making up and we had a lot of growing up to do but we was so in love we didn’t want to lose each other.”

She continued: “I said I do, with no dress no make up and no ring! I appreciate and love my husband so much for still wanting for me to have that special moment that every girl dreams of when he got down on his knee and put a ring on my finger and he did that for me!!”

And, Offset thanked her at the BET Awards when Migos won Best Group: “I thank my wife. You should thank yours.”

The couple welcomed their first baby, Kulture Kiari Cephus, into the world on July 10, 2018. Cardi B announced it on Instagram with a gorgeous pregnancy shot.

The new mom finally shared a pic of their special day on their anniversary.

Cardi announced the split in a video she posted on Instagram.

Offset took their break-up hard and shared a video asking for her forgiveness. He even interrupted her show at Rolling Loud Festival by hopping on stage and asking her to have him back with “Take me back Cardi” written in roses.

Cardi added her take on the infidelity rumors in W magazine: “Every single day there’s rumors about me and my dude. And it almost drives me crazy, because I start to believe them. I don’t have no proof. I don’t have receipts. But I just got to know my man. We practically on the phone 24 hours a day. If I can’t find him, I’m going to find his friend. Somebody going to answer the phone. But I cannot be feeling insecure, to a point that I would drive my dude away, because these people want that to happen.” 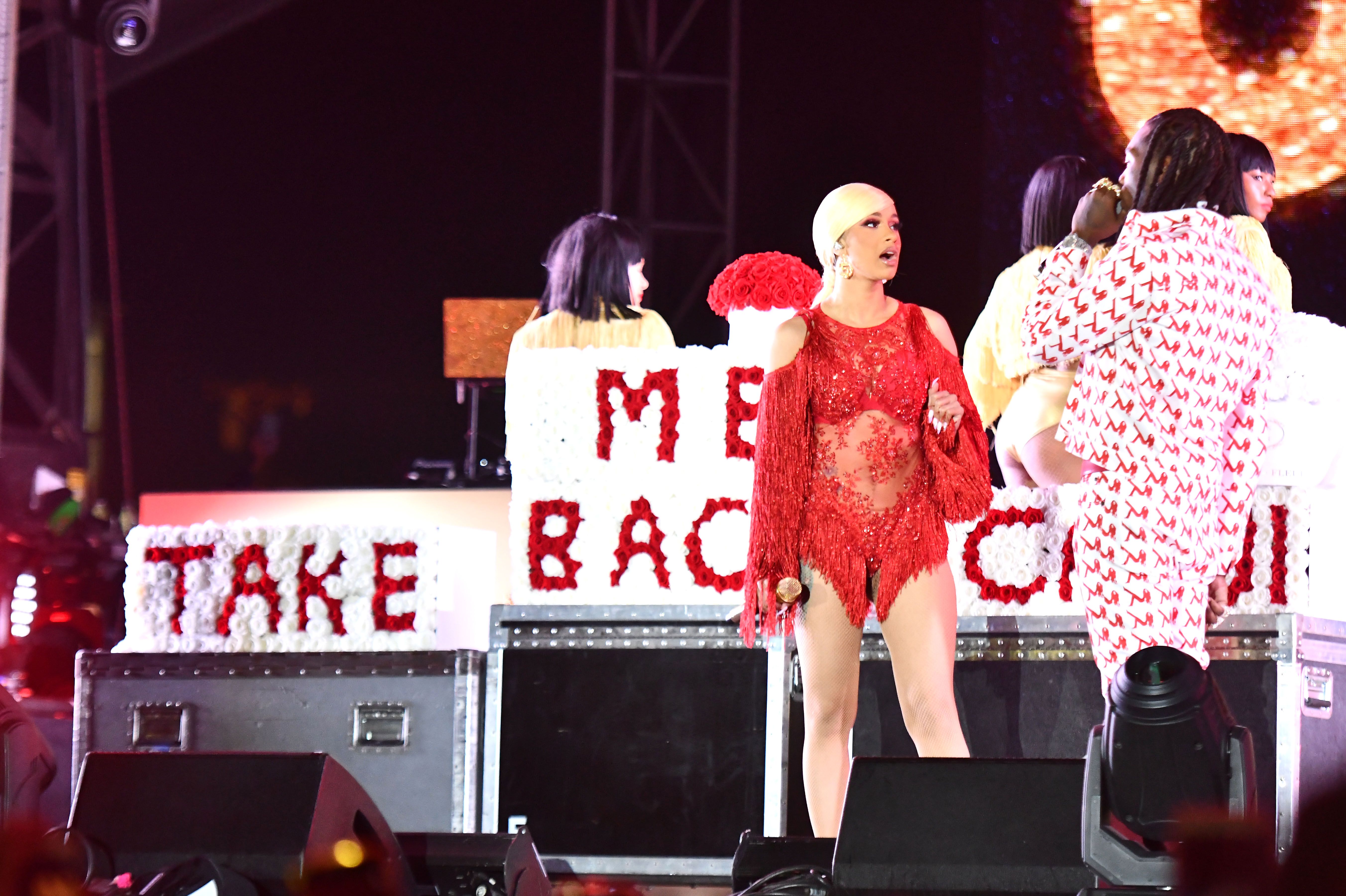 February 2019: They attended the Grammys together. 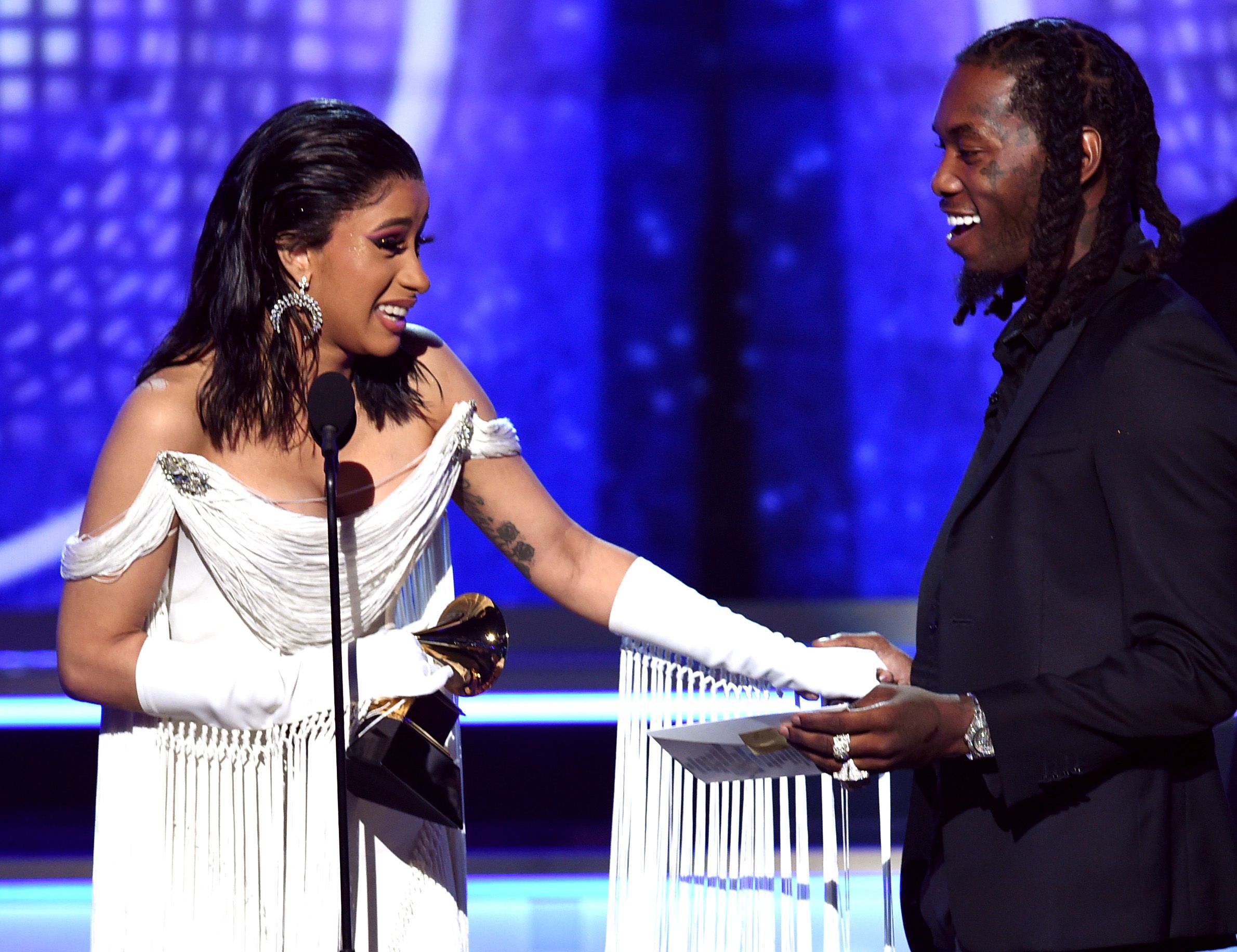 By the time the Grammys rolled around in 2019, Cardi B and Offset had seemingly made up. They attended the awards show together. He joined her on stage when she accepted the award for Best Rap Album.

December 2019: Cardi opened up about reconciling with Offset.

Cardi explained how she and Offset got through their rough patch in an interview with Vogue: “When me and my husband got into our issues—you know, he cheated and everything—and I decided to stay with him and work together with him, a lot of people were so mad at me; a lot of women felt disappointed in me. But it’s real-life s**t. If you love somebody and you stop being with them, and you’re depressed and social media is telling you not to talk to that person because he cheated, you’re not really happy on the inside until you have the conversation. Then, if you get back with them, it’s like, how could you? You let all of us down. People that be in marriages for years, when they say till death do us part, they not talking about little arguments like if you leave the fridge open. That’s including everything. When I was pregnant with Kulture, a lot of people was like, oh, he has three kids already; why would you have a kid with somebody that have three kids? And it’s like, how is that such a bad thing? My dad has eight kids, and we all get along, and it feels better, fuller. And with Offset, I feel like his kids just bring a pop of fun to life when they’re in his house. I actually love it. It brings out a different side of him that I like to see, and I love to see my baby interacting with her siblings. The more the merrier.”

She continued: “Everybody has issues. I believe in forgiveness. I prayed on it. Me and my husband, we prayed on it. We had priests come to us. And we just came to an understanding like, bro, it’s really us against the world. He has my back for everything, I have his back for everything, so when you cheat, you’re betraying the person that has your back the most. Why would you do that? We have come to a clear understanding. For me, monogamy is the only way. I’ll beat your ass if you cheat on me.”

Cardi gave Offset a shoutout on Instagram: “Happy Father’s Day again !!! This still happens till this day 😩but now she smacks him 😩😂😂”

The papers reportedly noted the marriage was “irretrievably broken” and “there are no prospects for a reconciliation.” At the time, the relationship seemed officially over.

By November, the case was dismissed, Entertainment Tonight reported. Cardi revealed what was going on behind the scenes on social media.

“If I take a break from my n**** and I decide to work things out, that’s regular relationship s**t,” she said in a voice post, per the publication. “If I want to go to an extreme to teach a n**** a f**king lesson and f**king file for divorce, I can do that. It’s my life. If that divorce s**t didn’t went through the court, y’all wouldn’t even never knew what the f**k was going on. So please stop.”

February 14, 2021: Cardi B and Offset celebrated Valentine’s Day as a couple.

What divorce? By Valentine’s Day of 2021, it seems that they were able to patch things up. Cardi B shared sweet snaps of their celebrations on Instagram. “Thank you baby ❤️❤️❤️ You made this weekend so extra special for me .I love you forever.”

They also took a romantic stroll on the beach.

June 2021: Cardi B and Offset announced they are expecting baby #2 at the BET Awards.

In true Cardi and Offset style, they shared the baby news live and on stage. Cardi B even took to Instagram to post how “amazing” a father Offset is with more photos from her stunning maternity shoot on Instagram. There’s especially sweet one with their first child, Kulture, touching her mom’s belly.

There's a Love Is Blind Vacation Package at the Resort Where the Show Was Filmed, and OMG