Former spy agency boss Duncan Lewis has backed the federal government’s new powers to cancel foreign deals struck by states and universities as necessary to protect Australia’s national interest, but cautioned they should be carefully and infrequently exercised.

The former long-serving intelligence and defence official said the powers were warranted due to the evolving nature of Australia’s bilateral relations with countries such as China, and the vulnerability of research-intensive sectors to foreign interference and intellectual property theft. 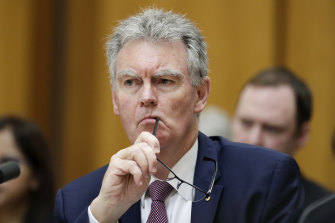 “I don’t see this as being a sinister thing, necessarily, of government stepping in. It’s quite often that the agreement was made at another time, and with a less than full understanding of what the wider bilateral relationship might be with a foreign country,” said Mr Lewis, who led the Australian Security Intelligence Organisation between 2014 and 2019.

“I think these interventions while regrettable – and I wish they were unnecessary – they are necessary and they do ensure that our national interest is being catered for. Having said that, those sorts of interventions need to be very carefully applied and, I would hope, infrequently.”

Mr Lewis, who retired from the public service in 2019 after a 47-year career as a decorated military officer, diplomat and intelligence chief, will join the Australian National University on Wednesday as a professor at its National Security College, an institution he helped establish a decade ago.

The university sector was deeply unhappy about its inclusion in the scheme, arguing it damaged international research collaborations, undermined academic freedom, and required a costly administrative process to determine whether thousands of agreements were captured by the laws.

Mr Lewis said it was important that research partnerships between Australian and Chinese universities did not become a casualty of the strained relationship between the two nations.

“We need to be very careful that we don’t act in such a way that by pursuing watertight security arrangements, that we don’t strangle other pursuits, like research.”

As ASIO boss, Mr Lewis was critical in expanding the focus of security agencies from terrorism to the threat posed by foreign interference to Australia’s political system, critical infrastructure and university sector, prompting the federal government to pass a raft of national security and espionage laws.

Under the Foreign Arrangements Scheme, set up through legislation passed in December, Foreign Minister Marise Payne has the power to cancel contracts struck by states, territories and universities with foreign entities that are deemed to contradict Australia’s national interest. In May, she terminated Victoria’s controversial Belt and Road agreement with China, as well as two education agreements made by the state government – one with Iran and one with Syria.

About 7000 university agreements are also under review, including the contracts for the controversial Confucius Institutes hosted by 13 Australian universities in partnership with Chinese universities.

Universities, Mr Lewis said, were an “important piece” of a wider battleground of malign foreign activity within Australia’s borders because they were a target for the acquisition of intellectual property and technical knowledge. This included research partnerships on military or “dual-use” technologies, such as drone programs, that can be co-opted for malicious purposes.

“We do need to be very careful that through time, what was originally seen as quite a benign and harmless and, indeed, a very positive agreement with a foreign entity, through time can become something which starts to look very different and you may wish to discontinue it,” he said.

But he cautioned against being “fixated” on China “because it ends up not necessarily serving our national interest in the best way”.

“It’s wrong to think there’s foreign interference under every bed. That’s not happening, but it is happening in certain areas,” he said. 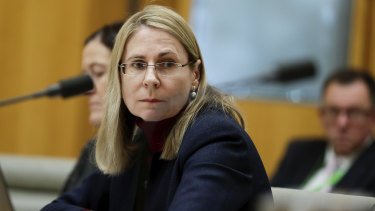 Dr Heather Smith will also join the ANU as a professor.Credit:Alex Ellinghausen

Dr Heather Smith, a former secretary of the Department of Industry, Innovation and Science, will also join the college as a professor.

Dr Smith, an economist whose 20-year career in the public service included senior roles in foreign affairs, national security and intelligence agencies, said Australia was facing a sustained period of uncertainty over the next decade driven by its complex relationship with China.

“We will now have to work more with trusted partners to safeguard our values and interests, push back against the weaponisation by China of the bilateral economic relationship, while being open to working with China where we have common interests,” Dr Smith said.

“Australia is not unique in facing this balancing act. But we have never faced this degree of complexity.”