Home » Lifestyle » Exactly Why Are People Signing Up to "See Them Aliens?" at Area 51

Sad your many years of schooling never equipped you with knowledge of aliens like you’d hoped? Genuinely interested in the concept of extraterrestrial life? Care to possibly see an alien live and in person for the first time in your life?? Well, great news, dude!

Two weeks ago, Facebook user @shitpostinginshambles created an event with two other users titled “Storm Area 51, They Can’t Stop All of Us” that’s set to take place on September 20. The mission of the Area 51 invasion? Simply put, to storm Area 51 and “see them aliens.” Since the event’s creation, over (wait for it!) 1.1 million people have signed up to join in on the fun and run into Area 51 in Amargosa Valley, Nevada, Naruto-style.

In full, the event description reads, “We will all meet up at the Area 51 Alien Center tourist attraction and coordinate our entry. If we Naruto run, we can move faster than their bullets. Lets see them aliens.”

Still lost? You have every right to be, TBH, but don’t worry. Here, a detailed explanation about what this Area 51 raid is all about, and how you can join if you want to be a part of this possibly fake, deeply questionable event.

So….exactly what is this all about?

Well, that part remains really unclear so far. There’s no explanation about why the event was created or why it got so much traction, but after spreading through the internet like wildfire, it’s clear that thousands of people believe in extraterrestrial life either jokingly…or not!

Okay, but is this sh*t for real, though?

This part remains up in the air, so we’ll have to wait until September to find out. There are two valid reasons that the post reads as a big fat joke, and that’s because (1) it’s literally attached to a sh*t-posting Facebook page, and (2) because the event description mentions running like Naruto. For those that aren’t into anime, Naruto is a Japanese television series about a young ninja named Naruto Uzumaki who runs in a very, er—unique way. TBQH, the way Naruto runs is pretty much impossible to nail in real life. Here’s a frame of reference, since you totally need one: 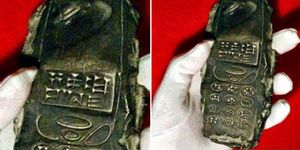 Though it’s highly unlikely that all 1.1 million people are going to show up to Amargosa Valley, there are some people that actually might be taking this seriously. Who knew! According to The New York Times, Little A’Le’Inn—a hotel in a nearby Nevada town—has experienced a serious uptick in callers requesting rooms on the Area 51 invasion date. “Oh, it’s insane,” Connie West, a co-owner of the inn, told Times. “My poor bartender today walked past me and said, ‘I hate to tell you, but every phone call I’ve had is about Sept. 20.’ They’re pretty serious. They’re coming. People are coming.”

How is Area 51 preparing for this massive influx of people?

It isn’t quite clear what specific precautions or drastic measures Area 51 will take to prevent this civilian attack from happening, but a spokesperson told the Times that “any attempt to illegally access military installations or military training areas is dangerous.” This makes sense, considering that Area 51 is secret military base part of the Nellis Air Force Base in southern Nevada, which is designed to test and train combat aircraft…meaning that the consequences for trespassing could literally be deadly.

How are people reacting?

We’ll let the posts speak for themselves:

the aliens when they realize being freed from area 51 means they have to get a job pic.twitter.com/NKQoYIWHeS

My alien that I snuck out of area 51 asking for the WiFi password pic.twitter.com/cjFg5JPcUi

I can officially say the Area 51 meme is the greatest of all time pic.twitter.com/nu6I8FSR3y

But really, to sum it all up, if you feel so inclined to join in on the Area 51 Naruto-storm hoping to meet other intelligent life forces, the reality is you’ll probably just get into huge trouble with U.S. military forces instead. So stick to the Twitter posts, okay?