A man who was diagnosed with breast cancer a month before his 30th wedding anniversary was made to feel ‘isolated and lonely’, when an online support group declined his membership because of his gender.

David McCallion, 55, from Manchester, who is one of just 390 men annually diagnosed with the condition in the UK according to charity Prevent Breast Cancer, didn’t know any other male sufferers to share with, so he searched online.

Facing a mastectomy and living with the fear that his condition could be hereditary because his mother also had breast cancer, the community worker felt in desperate need of support beyond his family.

‘I tried to join a support group on Facebook. But they sort of politely told me that because I was a man it might prevent members from opening up – so I thought it was best that I didn’t join. I was effectively declined membership,’ he said. 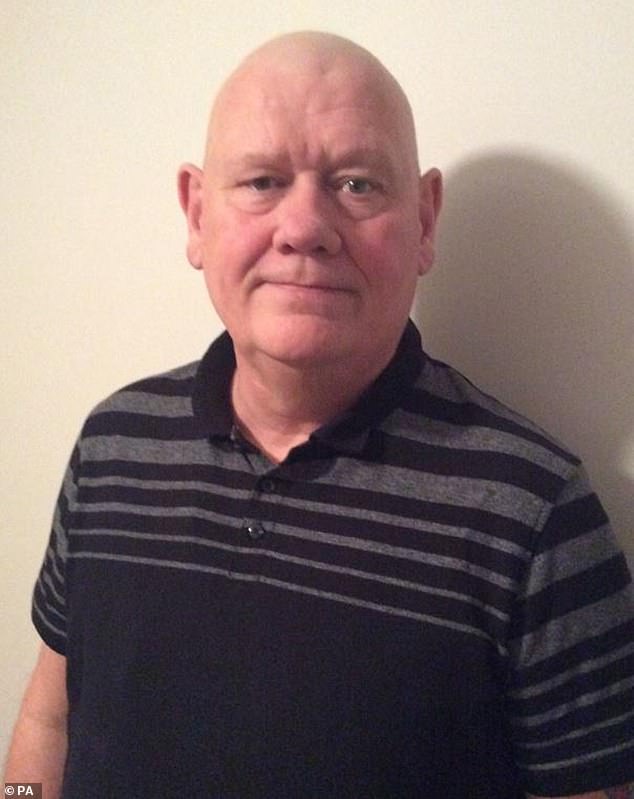 David McCallion, 55, (pictured) from Manchester, who was diagnosed with cancer in 2019, revealed he was declined membership to a support group on Facebook 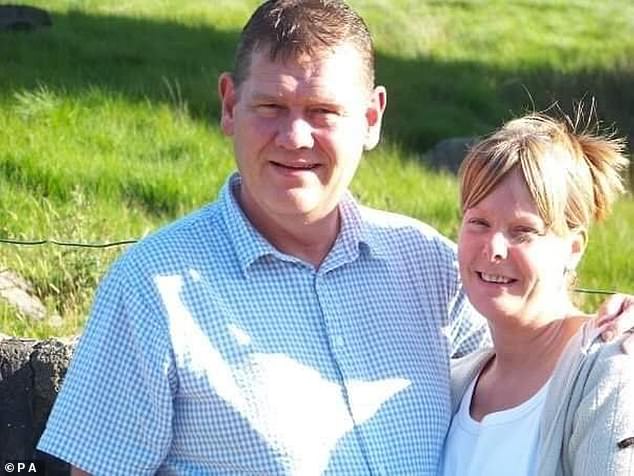 David (pictured) began a gruelling regime of chemotherapy on December 5th, which is set to finish at the end of next month

He continued: ‘I was made to feel like I was muscling in. But the last thing I wanted to do was jump up and down saying, “Look at me I’ve got breast cancer too”.

‘But if the other 389 men feel anything like I did, something needs to be done for men with breast cancer.

‘I will never be the same person I was before my diagnosis because, politely speaking, I didn’t realise how lonely this disease is.

‘Cancer is lonely full stop. But being a man in what I call the “pink world” of breast cancer – that’s even lonelier.’

David, who has two sons, builder, Ryan, 27, and communications professional, Liam, 25, with his carer wife, Julie, 54, is now keen to break taboos surrounding male breast cancer, which has seen other men questioning his masculinity.

He said: ‘When I tell other blokes about my diagnosis, half say, “Men don’t get breast cancer”, and I lift up my shirt and say, “Yes they do”. 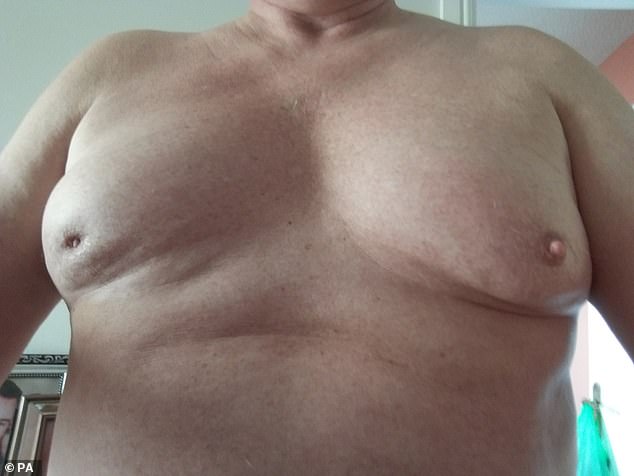 David initially thought his inverted nipple (pictured) was related to gynaecomastia, however a doctor referred him to Greater Manchester’s Royal Oldham Hospital for further examination 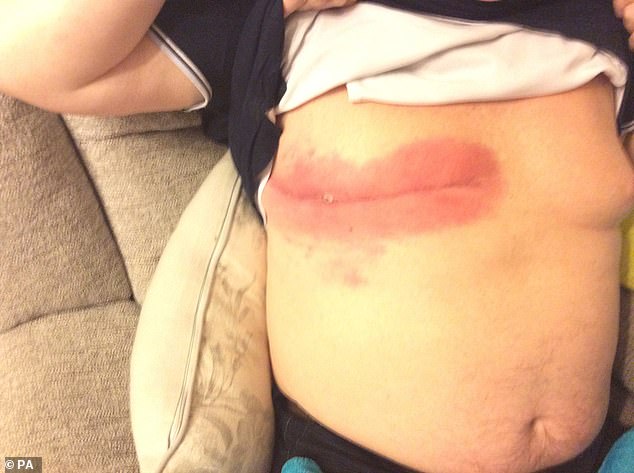 David (pictured after mastectomy) asked for his surgery to be delayed until after his 30th wedding anniversary, which involved a road trip and weekend in London

‘I don’t care what people say about that sort of thing, though. I’ve been married for 30 years, I have two sons and two grandkids.’

David was diagnosed with gynaecomastia in 2015, a common condition causing men’s breasts to become larger than normal, according to the NHS.

In April 2019, he noticed his right nipple was inverted and thought it must be related to the condition.

David said: ‘I’d been seeing my GP for about a year, as I’d been struggling with anxiety after losing my mum, Joan at 91, in June 2018, after a long battle with dementia and breaking her hip.

‘The doctor looked at my nipple and told me not to panic, but said that we had to rule a few things out.’

‘I just assumed it was something to with my man boobs,’ he added. 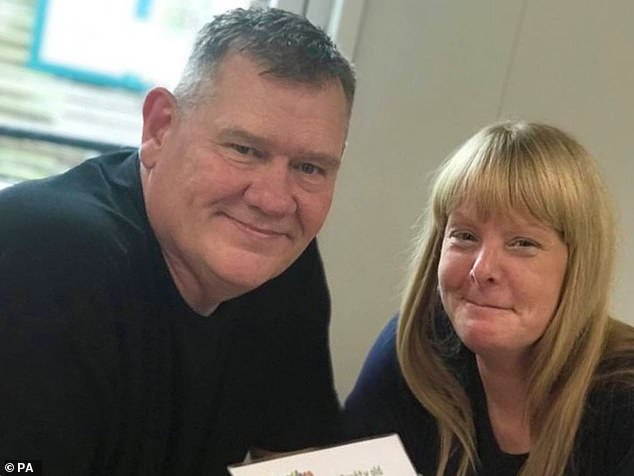 A consultant told the community worker (pictured with his wife, Julie, 54) that he had grade two invasive ductal carcinoma

Given a physical examination, a mammogram and an ultrasound scan, doctors then told David he needed a biopsy, which involves a sample of tissue being taken and examined more closely.

‘They were able to rule out a cyst right away and 20 mins after the biopsy the doctor said that, in his opinion, there was a 99 per cent chance it was going to be cancer,’ said David.

‘The first thing I thought was, “How the hell am I going to tell my family?”.

‘My second thought was, “How am I going to tell everybody else I have breast cancer – as a man?”.

‘I didn’t know whether I was coming or going – my head was completely gone.’

Returning to hospital with his wife on July 24, a consultant explained that David had grade two invasive ductal carcinoma, which is found in the breast duct and surrounding tissue.

What are the symptoms of male breast cancer?

Breast cancer is rare in men. There are about 390 men diagnosed each year in the UK. This compares to around 54,800 cases in women.

The most common form of cancer in women and men is called ‘invasive breast carcinoma – no special type’.

The risk factors for male breast cancer include:

The most common symptom for men with breast cancer is a lump in the breast area. This is nearly always painless.

Other symptoms can include:

The same treatments are used for breast cancer in men as for women.

According to Prevent Breast Cancer who claim 80 men die each year of the disease in the UK, this is the most common form of breast cancer in men and women.

David said: ‘For the next eight minutes everything the doctor said was addressed to my wife and, in the end, I had to tell him to talk to me and not to her.

‘I got quite angry, but later apologised and explained that I’ve got to own the breast cancer – it’s mine.

‘He explained that he breaks this news to women day in day out, which is why he didn’t address me at first. He’s been brilliant ever since, though.’

After being told a full mastectomy on his right breast was the best course of action, David asked for the surgery to be delayed until after his 30th wedding anniversary, on August 19.

‘The doctor told me the goal was to cure the cancer, but they wanted to do everything possible to make sure it didn’t come back,’ he said.

‘But it’s not your 30th wedding anniversary every day and I wanted to celebrate that before the operation.

‘We had a bit of a road trip, heading down to Birmingham to meet family, before spending a weekend in London.

‘We walked around until our legs dropped off, going on a boat trip and being proper tourists.’ 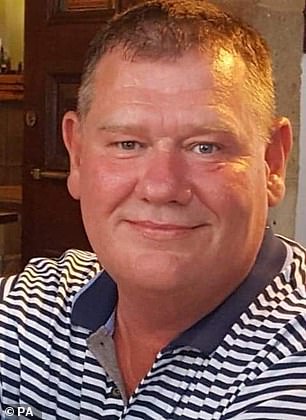 The 55-year-old (pictured) who also suffers with an abdominal aortic aneurysm, said he didn’t want Julie to think that he was worried as he prepared for surgery

Then, on September 25, at North Manchester General Hospital, David, who also suffers with an abdominal aortic aneurysm (AAA) – a bulge in the aorta, the main blood vessel that runs from the heart down through the chest and tummy – had a mastectomy.

He also had a lymph node removed to test for traces of cancer.

The AAA, which was diagnosed in October 2018, when it showed up during a scan of his painful left hip, is being monitored by medics, but has not yet required treatment.

David said: ‘The doctors told me that having anaesthetic could raise my blood pressure and cause complications, but vascular surgeons were there as a back-up during the mastectomy.

‘Julie was with me until I had to put my gown on and I gave her a quick hug and said, ‘See you later.’ I didn’t want her to think I was worried, but with the added complication of the AAA, of course I was.’

Surrounded by smiling faces when he came to from the two-hour operation, David was told his surgery had been a success.

But, after the lymph node tested positive for cancer, on October 4 David – who was not offered reconstructive surgery and does not want it – had a further 24 removed.

Luckily, none of the other lymph nodes were cancerous, but on December 5, he began a gruelling regime of chemotherapy, having treatment every week, which will finish at the end of next month.

David, will then have 15 days of radiotherapy in April, before taking Tamoxifen, a hormone therapy that helps prevent the disease returning, for five to 10 years.

‘The side effects have been crap,’ he said.

‘I’ve had infection after infection, upset bowels and a sinus infection that has lasted for nine weeks.

‘It’s been a bit of a rocky ride to say the least, but people have it a lot worse than me, so I thank my lucky stars.’

David also faces the prospect of his breast cancer being hereditary, as his mother had it in her eighties.

Once his treatment has finished, he will be tested for the BRCA1 and BRCA2 gene mutations, which run in families and increase the chances of developing breast, ovarian, colorectal and prostate cancer, according to the NHS.

‘My mum’s cancer was similar to mine, so it is a concern that it could be hereditary,’ he said. 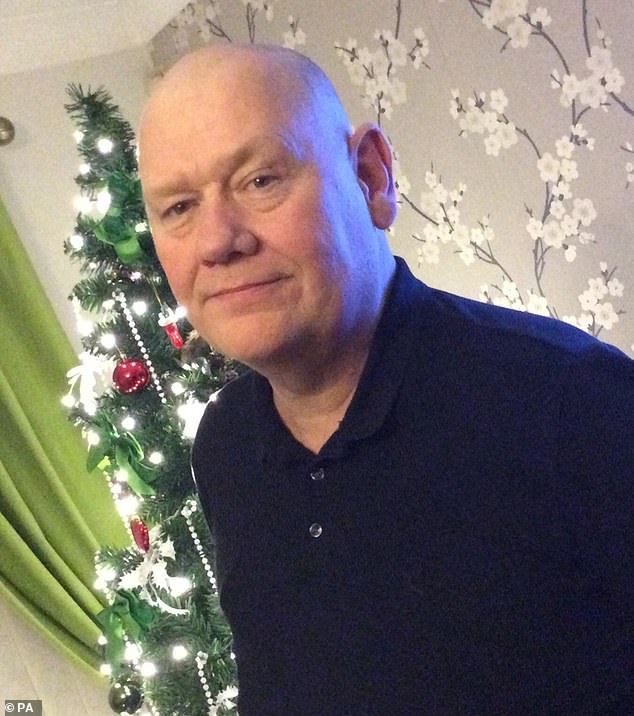 David (pictured) has now found an awareness campaign about male breast cancer, founded by a woman whose partner suffered with the condition

‘The doctors haven’t given any suggestion that it is and we don’t know for definite what kind of cancer Mum’s was – it was so long ago – so all we can do is hope that it’s not hereditary.

‘I’ve not been tested for the BRCA1 of BRCA2 genes yet, they’re waiting until after treatment.

‘If I do have them, my boys will have to be checked, too, but I’ve told them they don’t need to worry until I’ve been tested.

‘I just hope my breast cancer is some fluke or case of bad luck and not hereditary.’

As David’s cancer journey has progressed, he has found #bluegetittoo, an awareness campaign about male breast cancer started by a woman whose partner was diagnosed.

He continued: ‘Not long after I was effectively declined membership of a support group, I was on the internet looking for places to talk about male breast cancer and found a Facebook page set up by Lorraine Milligan, who wanted to offer support after her partner was diagnosed.

‘At the time, there were only about 11 people that had liked it, but it was great to see people talking about male breast cancer with the hashtag #bluegetittoo.’

Now David is keen to make men aware that breast cancer can affect them, too, and is urging them to check themselves for tell-tale symptoms. 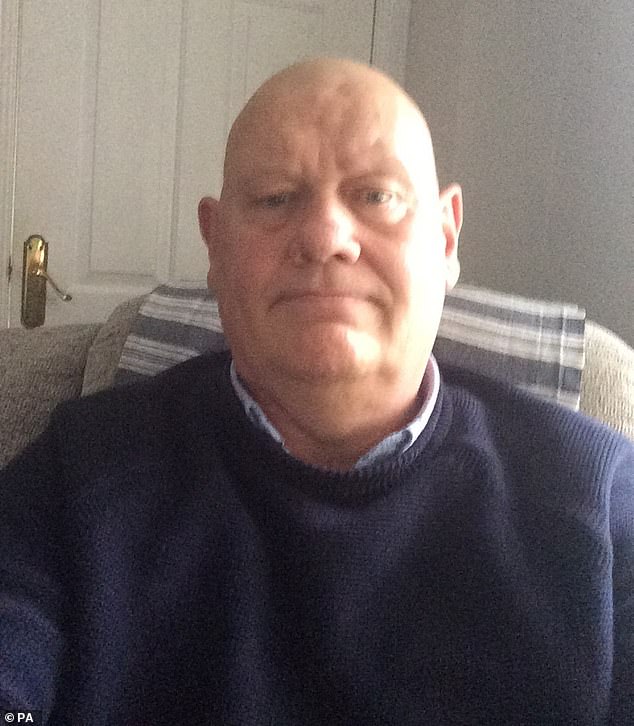 David (pictured) urges men to talk about their health more and to regularly examine their body, as he believes men always turn up at the doctors late

‘Men need to talk about their health more,’ he said. ‘By the time they finally do it’s often too late.

‘There’s a culture of checking down below for testicular cancer and that needs to be broadened to include other areas, including the chest area.

‘Pick a day of the month – it could be a birthday or pay day – but pick a number and check your body once a month on that day.

‘Feel your chest, look at your body and examine it properly.

‘Men always turn up at the doctors late. I should have gone as soon as my inverted nipple appeared.

‘A lot of people don’t believe this happens, but 390 men are diagnosed with this disease every year, so male breast cancer is definitely real.’

To find out more about breast cancer in men and how to spot the symptoms, visit preventbreastcancer.org