A young baker has divided the internet after he created an unusual sweet and savoury mash-up of McDonald’s Apple Pie stuffed with McNuggets.

‘This Maccas hack has blown our minds… but you may not like. Order an Apple Pie and three chicken nuggets,’ the 22-year-old said in a video posted on Instagram. 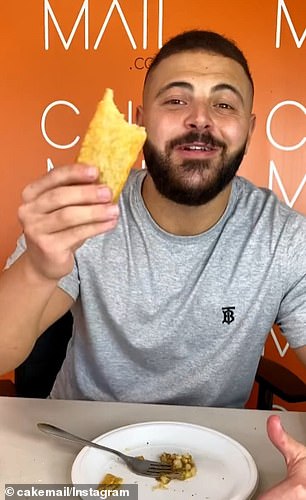 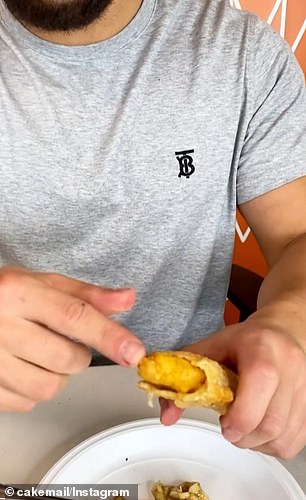 Jonny Massaad, from Sydney, has divided the internet after he ate an unusual sweet and savoury mash-up of McDonald’s Apple Pie stuffed with McNuggets

The first thing he did was cut one end of the Apple Pie, and he used a fork to scoop out all the filling.

Next, he stuffed the shell with the pieces of chicken nugget.

The founder of Cake Mail then dunk the creation into the Sweet ‘n’ Sour Sauce before he took one bite out of it.

‘Honestly that is the best way to eat your chicken nuggets. It’s so crunchy… Please try it,’ he urged his followers.

The video has since been viewed more than 37,000 times, with many admitting they were not keen on the idea of eating an apple pie stuffed with chicken.

However, some suggested they were curious to give it a go.

Earlier this year, Jonny revealed a simple trick to drink from a McDonald’s cup without using a straw.

He shared a video showing how he simply pushed a tiny rectangular tab on the lid to create a hole to drink out of.

By doing this method, he avoided having to take the lid off or drink out of the biodegradable paper straws, which typically goes soggy after just a few sips.

‘Another Maccas hack… because everybody, well I do hate the paper straws, these are the worst paper straws I’ve ever seen,’ Jonny said in the Instagram video.

‘What you do, see these little holes? Push it in and drink from it.’

Ask Allison: 'I feel my married friends pity me and my single life'

How to get a Swarovski advent calendar that usually costs £99.99 for just £20