Home » Lifestyle » Francis Greenslade: more than just ‘the idiot in the funny hat’

“Normally I’m playing the idiot brother, who comes in in the second act with a funny hat,” says Francis Greenslade of his stage acting career.

“I’ve always thought of myself as a great tragic actor,” he adds, half-seriously. “Every comic thinks they’re the most brilliant serious actor in the world, but they’ve never had the chance.” 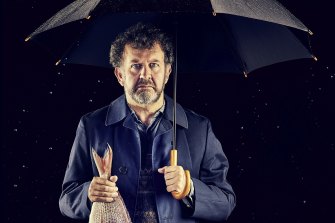 There’s a dry wit behind the lugubrious face. We’re having a coffee in Southbank before he heads off to the ABC to check in with the Shaun Micallef’s Mad as Hell team.

He loves the show, which has been bread and butter during this hard, harsh year and a half for professional actors.

But after decades playing for laughs, often at the side of his university comrade-in-comedy Shaun Micallef, Greenslade treasures the rare times when he wins a dramatic role, with no idiocy or quirky headgear required.

Such as now: a lead in When the Rain Stops Falling, opening this week at Theatre Works. 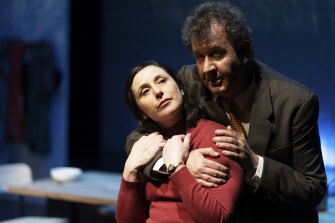 Francis Greenslade and Esther Van Doornum in When the Rain Stops Falling.Credit:Lachlan Woods

“You know, if the MTC were doing this play I don’t think I’d get in the door,” he reflects ruefully. “I’m not complaining about being typecast: it means you’re being cast. But, especially during COVID, casting just tends to go for the most obvious, what’s going to get the audience. They’re not going to try something dangerously experimental with their casting.”

Which is a shame, because there’s a lot more to Greenslade than being able to sell absurdist satire in an outrageous costume. As Micallef himself pointed out five years ago in a piece for The Age’s Spectrum, recalling when he met Greenslade at the Adelaide University’s Footlights club: “As he amused us during breaks, playing the clarinet and the accordion and the banjolele and quoting from the latest Moliere play he’d translated and singing like an angel – generally carrying on as Noel Coward might had he been wittier and more gifted and alive – we began to feel intimidated.”

The pair parted ways for a bit after uni. Micallef tried being a lawyer, while Greenslade had a “low point” as a clerk at the tax office, then joined South Australia’s State Theatre Company ensemble for a few years. 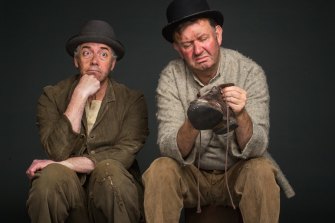 Shaun Micallef and Francis Greenslade in Waiting for Godot for MTC in 2017.Credit:Simon Schluter

There was TV work, too, including a role (as a priest) in River Kings and (as a policeman) in Black Beauty (the role required him walking in the dead of night through puddles in pouring rain with a lantern powered by an electrical cord down his trouser leg).

“Adelaide is lovely but you can’t sustain a career,” he says. So he and Micallef, envious of Greenslade’s TV success, went to Melbourne, booked a hotel room, and tried to find work, and failed.

“We hung around, we annoyed each other intensely, we tried out twice, we did seven minutes of comedy each,” Greenslade recalls. “And at the end of the week after having said goodbye to everyone, even collecting goodbye presents, we came back to Adelaide.”

But they tried again, and made a success of it. Or, as Greenslade puts it, “I got an agent and I was here [for] the usual poverty and the occasional job”.

Greenslade believes comic acting has given him a good grounding in tension and timing, in taut rather than indulgent delivery.

“You’ve got to do everything else that a dramatic actor does,” he says. “But you’ve also got to jump on your cues, it’s got to have an energy. Even if the scene is a gentle scene there’s got to be an energy to you that sometimes dramatic actors I see don’t have.”

Greenslade says When the Rain Stops Falling, by Andrew Bovell (best known for writing award-winning film Lantana; he also co-wrote Strictly Ballroom), “should be one of Australia’s classics”, up there with David Williamson’s The Club. It’s secured a life beyond its 2008 premiere at the Adelaide Festival, in productions around the country and in London, New York and Canada.

The intergenerational drama of secrets and betrayal set against the backdrop of climate change looks at how a generation’s mistakes flow through their descendants: about how much gets forgotten, even while its impact is being felt.

Like most great plays it anchors great themes in the personal realm, where we can connect – as Greenslade does.

He’s been content to act, not write, for Mad As Hell. But recently he’s started writing: he has a “quite dark” play he’s trying to get into production.

“I noticed other people doing it, and I’ve been in things that you go ‘I think I could do better than this’,” he grins. “So you do.”

When the Rain Stops Falling runs to July 31 at Theatre Works, St Kilda

U.S. Postal Service to award $6.3B contract for new mail truck this year. See the finalists

This is Fleabag’s best moment, according to the Bafta TV nominations

When is the Autumn Budget 2020 and what will be included this year?