Australia’s fledgling offshore wind industry has been given a funding boost, with the Victorian government pledging almost $40 million towards proposals for three wind farms off the Gippsland coast.

The most developed of the proposals, Star of the South, will get $19.5 million from the state government to support pre-construction work, including site investigations in Gippsland and offshore geotechnical work. 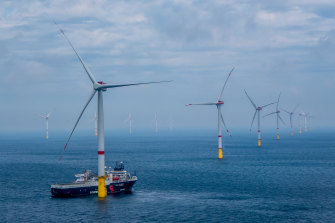 The Star of the South would look similar to this; the Veja Mate offshore wind farm in Germany.Credit:

If the 2.2-gigawatt wind farm came to fruition, it would provide about 20 per cent of Victoria’s energy, and power about 1.8 million homes. Valued between $8 billion and $10 billion, the project would be one of the largest offshore wind farms in the world.

The announcement comes as a final vote on federal legislation to enable offshore wind projects in Commonwealth waters is expected in the Senate during the final sitting days of Federal Parliament this year. 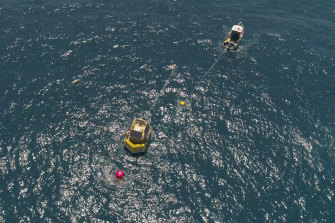 Star of the South wind- and wave-monitoring equipment, collecting data off the coast of Gippsland.

Victoria’s offshore wind resource is the best in the country “by a mile”, the state’s Environment and Energy Minister, Lily D’Ambrosio, said.

“It is no wonder that Victoria is the [wind energy] choice, coupled with our government’s absolute commitment and ambition to drive the renewable energy sector,” she said.

Gippsland has long been central to Victoria’s energy generation and is home to the state’s three remaining, ageing coal-fired power stations.

Victoria has committed to cutting the state’s greenhouse gas emissions in half by 2030, and all government operations – including metro trains, schools and hospitals – will be powered by renewable energy by 2025.

The Star of the South project is designed to capitalise on Bass Strait’s powerful winds, suitable seafloor and water conditions, and its proximity to the Latrobe Valley, which is one of the strongest connection points to the National Electricity Market distribution grid.

“Governments around the world are looking to offshore wind to power their energy systems into the future and Victoria is leading the way – attracting investment and creating jobs for workers in the regions,” Mr Thorhauge said.

If the project proceeds to construction, it has the potential to provide 2000 direct Victorian jobs, and 200 ongoing local jobs once up and running, the company says.

Friends of the Earth welcomed the news, saying offshore wind could make the Gippsland region a renewable energy “powerhouse” and provide a way for coal communities to modernise their industry.

“Offshore wind is a critical sector for the Victorian government to deliver its legislated commitments to climate change and meet its emissions reduction targets,” said Pat Simons, Friends of the Earth renewable energy spokesperson.

“The Andrews government’s announcement puts Gippsland at the forefront of this exciting new industry and jobs.”

Any major project requires a community consultation process and will be subject to a range of regulatory approvals, including environmental impact assessments.

The government has been criticised by the opposition and investors over years of delays in legalising the offshore wind industry.

Although Labor indicated it would support it, the Offshore Electricity Infrastructure Bill remains in the Senate because some senators are threatening to withhold their votes until the government overrides states’ COVID vaccination requirement.

It’s unclear when the bill will be passed.

Promises of local jobs in regional communities from renewable energy projects are shaping up as an election pitch from both major parties, with the federal election due by May.

Offshore wind farms would most likely be located near areas such as Gladstone in Queensland, Newcastle and Wollongong in NSW and the Latrobe Valley.