Who knew dragonflies were such showstoppers? You don’t have to be an entomologist to appreciate the laciness of their wings, the great length of their abdomens, their flashes of brilliant colour and their flurry of acrobatics. What the dragonfly lacks in pollinating power, it makes up for in drama. 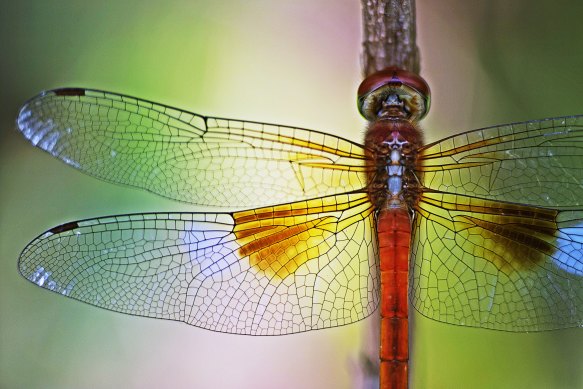 Victoria is home to almost 80 of the 330-odd species of dragonfly and – the related but more delicate – damselfly that live in Australia. While these insects are always most prevalent from November to March, their current abundance is being attributed to La Nina.

Landscape architect Emmaline Bowman says this is because three years of higher-than-usual rainfall in many parts of the state has improved the quality of fresh-water ecosystems and reduced many of the problems associated with nutrient build-up. It has also stopped some of the ponds and wetlands that would usually dry out in high summer from fully draining.

This has all been a boon for dragonflies because if there is one thing these insects can’t live without, it is water. For the month or so that a dragonfly exists as an adult insect, it has spent up to three years as an aquatic creature.

That means the dragonflies now appearing in our gardens could be the offspring of female dragonflies who, back in 2019, mated for just a few seconds and then dipped their abdomens in water and scattered eggs that hatched about a week later.

Even if they scattered their eggs a little later than that, the plethora of these insects has not come about overnight. “Things like this take time,” Bowman says. “Everything is a response to climate.”

By the same token, as the current La Nina comes to an end and conditions dry, dragonfly populations will gradually start to decline. But all will not be lost. Many gardeners are developing a new appreciation for the insect.

There’s lots to like. While they won’t pollinate plants in the manner of bees, they will never harm your vegetable patch like the cabbage white butterfly, the population of which is also swelling with the recent rain. Where cabbage white butterflies lay their eggs on the underside of the leaves of brassicas, with the resulting caterpillars damaging crops (best to keep the butterflies out with protective netting), dragonflies lay eggs on aquatic plants or still water.

And then there is the benefit of the dragonfly’s insatiable appetite for the mosquito, another insect currently out in abundance. Not only do dragonfly larvae, or nymphs, feed on mosquito larvae, adult dragonflies eat adult mosquitoes. Some adult dragonflies are said to consume hundreds of mosquitoes a day.

In turn, dragonflies are themselves food sources for fish, frogs, other aquatic insects, birds, lizards, spiders and more. Bowman says both the nymphs and adult dragonflies are important components of food webs that help form the natural balance of an ecosystem.

So how to lure them? “Build a pond” is Bowman’s short answer.

Then fill it with plants that will provide havens for dragonflies. While this is best done by creating a mix of shallow, medium and deep areas to provide habitat for a range of plant and animal species (nymphs being ferocious predators), it is also possible to plant in pots that can be submerged in the water at different heights.

Bowman cautions against using regular potting mix, which often contains wetting agents, fertilisers and other components that can encourage algal blooms. Instead, she suggests filling pots with soil from your garden mixed with some sand.

She also recommends using large pots to accommodate growth, and incorporating native plants, such as milfoil, nardoo and rushes, which will be especially attractive to dragonflies and other native wildlife. The plants will also reduce the amount of sunlight entering the water, thereby reducing algal growth.

If you create a pond now, you could have nymphs by Christmas.

Make the most of your health, relationships, fitness and nutrition with our Live Well newsletter. Get it in your inbox every Monday.

Most Viewed in Lifestyle