Sweet dreams! Grandfather who was tasked with making a house bed for his grandson, 2, completes project for £200 by using recycled wood – and it has its own doorbell, TV and stairs

A grandfather who was tasked with making a house bed for his grandson after his daughter kept seeing photos of the trend on social media has impressed DIY fans.

Danielle Jade Ahmed, 29, from Wrexham, Wales, first fell in love with house beds after seeing photos from companies in the US and wanted to get one for her son, Zair, two.

She decided to ask her father Darren Evans, 53, to help build one after realising how expensive they were to purchase.

The bed took around six to eight weeks to design, with the granddad working one to two days a week on the impressive £200 project – complete with a doorbell, TV and LED lights. 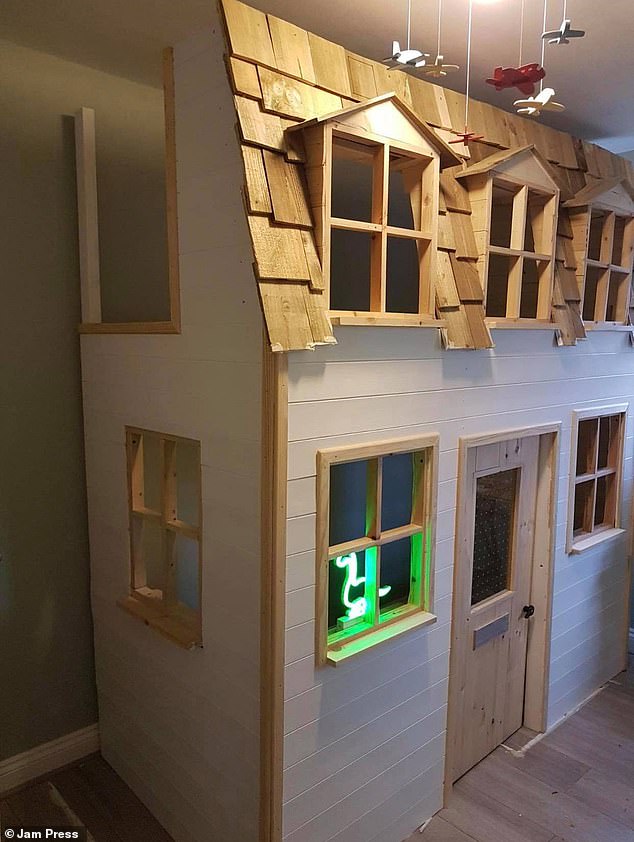 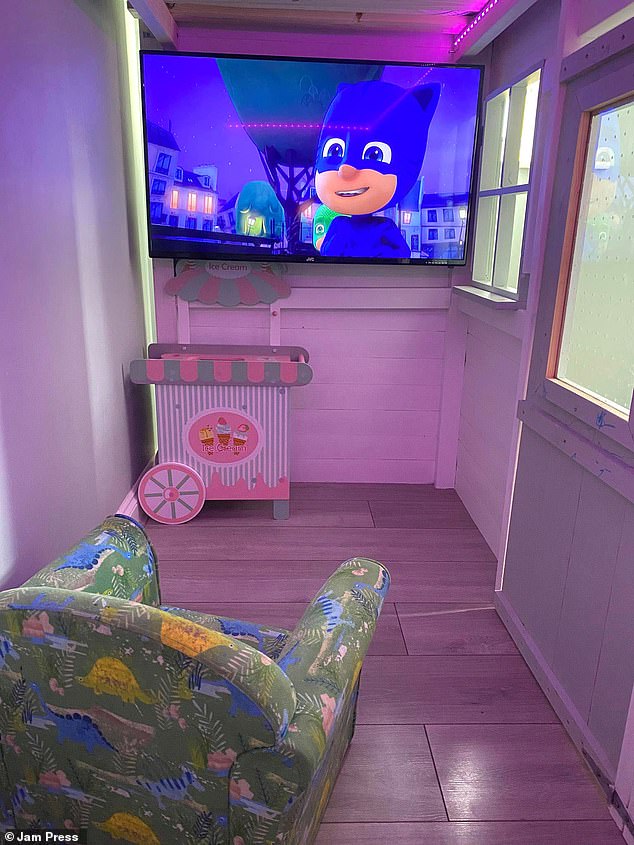 Danielle was inspired to have a house bed built after seeing how expensive they are to order from the U.S. Pictured: The interior of the house bed 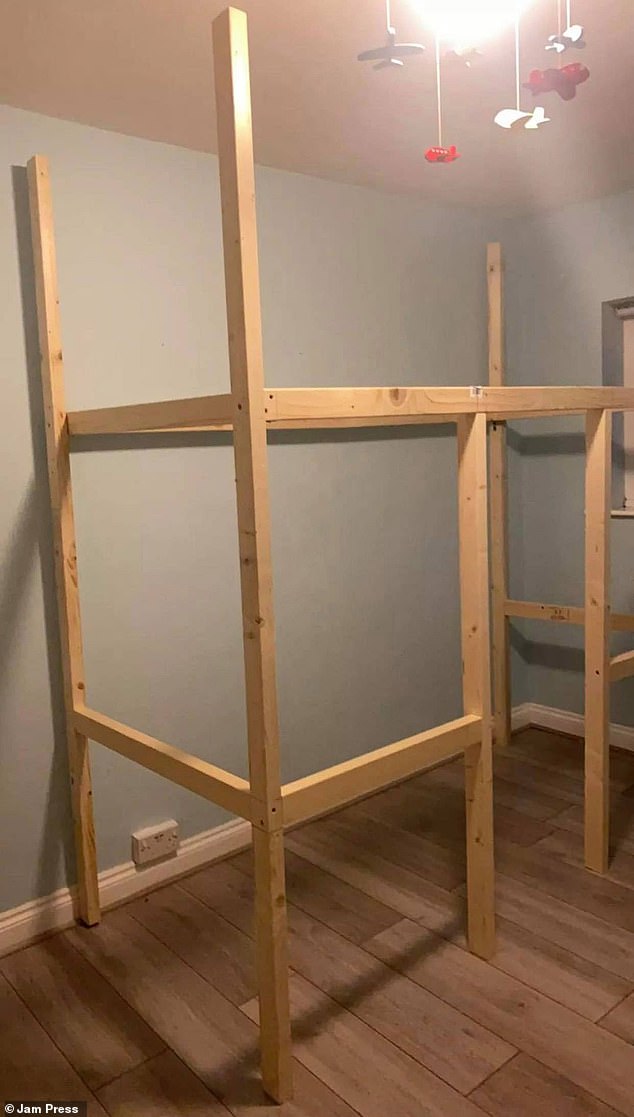 Darren spent around six to eight weeks on the project and spent just £160 on the basic frame including the windows and stairs. Pictured: The house bed in construction

The DIY house bed has been made mostly with recycled materials and wood from a local supplier in Marchiel, Wales, along with other materials from Wickes.

Just £160 was spent on the basic frame for the windows, the house, the panelling and the stairs.

For the roof tiles, Danielle recycled wood leftover from building a fence and the door costing just £6.

The family had recently had carpets fitted, and used the off-cuts for the stairs and the glass for the door came from an old fridge. 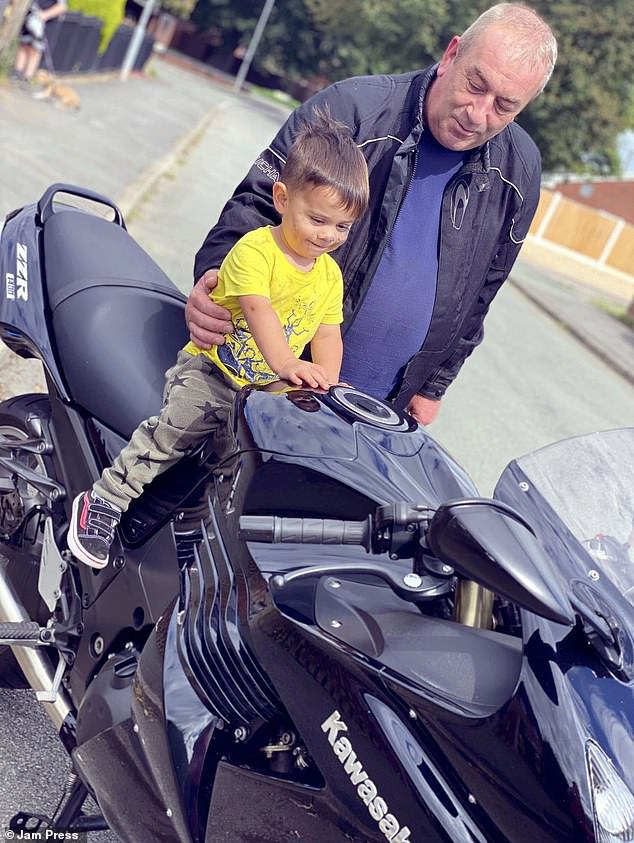 Darren who works as a lorry driver, had just one to two days a week available to build the house bed. Pictured: Zair with his granddad Darren Evans 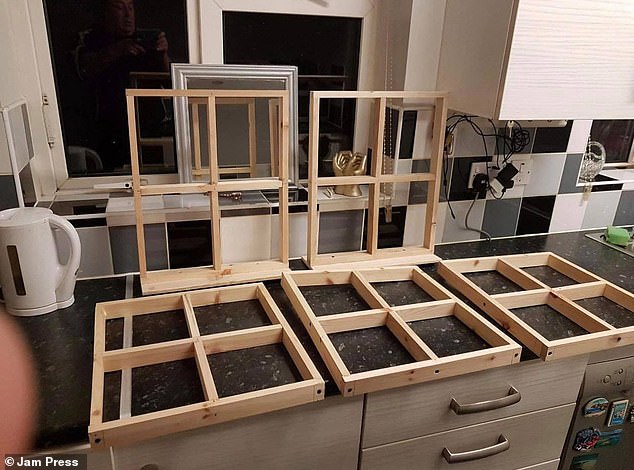 The family used recycled wood leftover from building a fence and the door for the roof tiles – costing just £6. Pictured: The house bed under construction 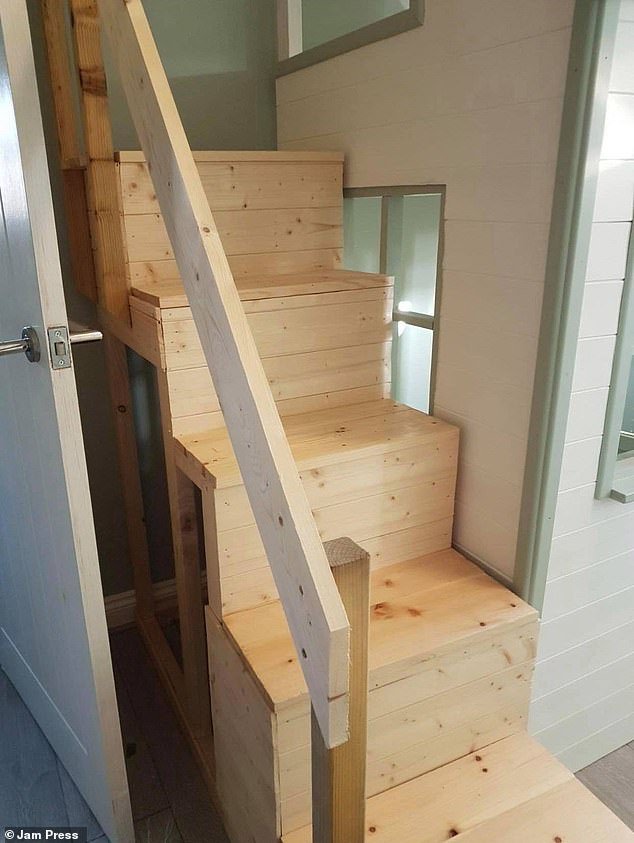 Danielle and Darren used the off-cuts from recently having carpets fitted for the stairs and took glass from an old fridge for the door. Pictured: The stairs which were added on last as a separate piece

Danielle who is a homecare assistant, added a doorbell from Amazon, along with LED lights and a TV for the finishing touches.

‘It was built for my little boy Zair who is three years old in October,’ Danielle said.

‘I had seen some online but the prices were crazy and they were based in America, but I had fallen in love with them and knew my son would as well.

‘The process took around siz to eight weeks, because my dad who built it works away as a lorry driver and only had one to two days a week available to carry out the work. 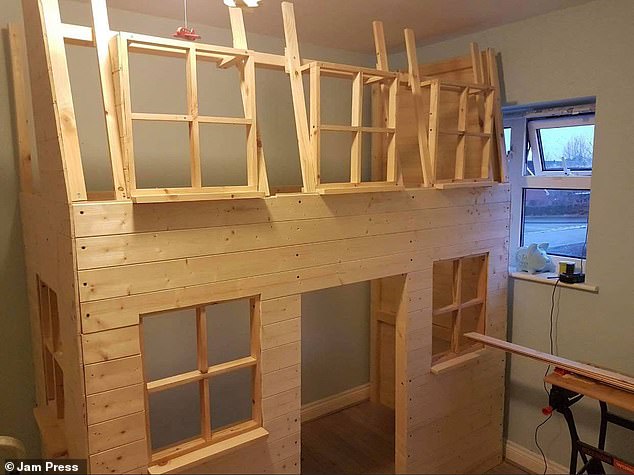 Danielle used Dulux to decorate the bed and masonry paint for the white areas throughout the house bed. Pictured: Under construction

‘I decorated the bed with Dulux for the windows and frames and masonry paint for all of the white.

‘First we made the frame, then added the panelling on downstairs and made the cut-out for the windows and entry to the bed itself, upstairs and doorway.

‘My dad then made all the windows and doors, and fitted these in.

‘Then he made the roof to fit around the dormer windows and added the tiles on individually to give it the effect it has.

‘It was then fully painted, the stairs were added on last as a separate piece.’ 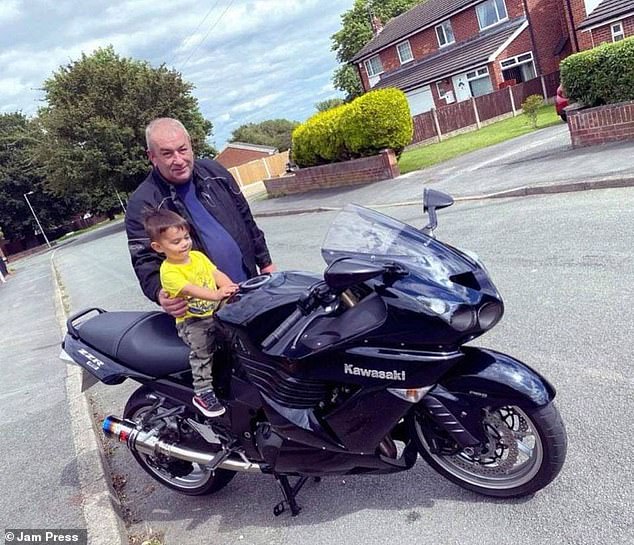 Danielle explained they began the project by making a frame, with Darren making all of the windows and doors. Pictured: Zair with his granddad Darren Evans

Sharing her advice for others who might want to take on the project, Danielle added: ‘I’d advise knowing someone who is confident working with wood.

It took a lot of painting and cutting but the end results are amazing and worth every second.’

She captioned the post: ‘After seeing the amazing house beds others have done and searching online at the prices of them, I put the idea forward to my dad and he’s created this! 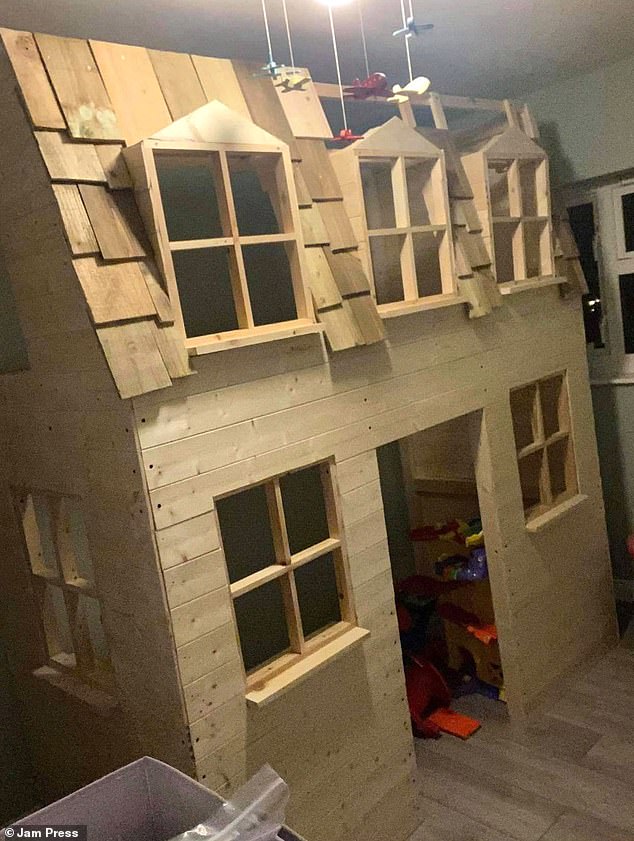 Danielle said the project took a lot of painting but the end results were worth every second. Pictured: The house bed under construction

‘(He’s a lorry driver) but pretty handy with wood, had to share it very impressed with his DIY on a budget.’

‘Pretty handy with wood’ is an understatement it’s amazing,’ wrote one person.

‘Spectacular. You should think about giving up your day job. Folk pay fortune for this sorted of bespoke beds,’ another added.

‘I want one for myself never mind the kids,’ wrote a third fan of the DIY bed.

‘That’s freaking awesome. I’ve been thinking of building a special bed for my son when he’s a little older,’ another said. 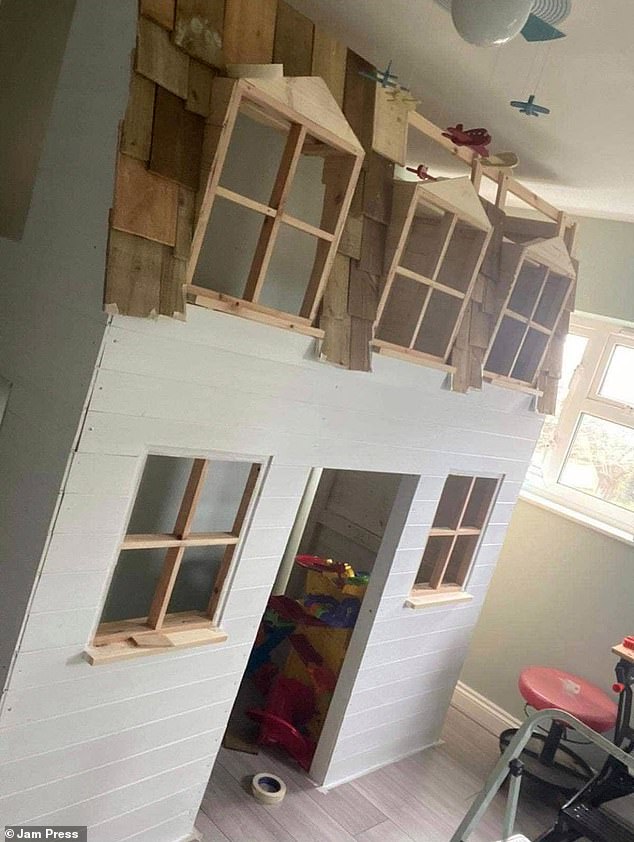 Danielle racked up over 3,000 likes and hundreds of comments on a Facebook post sharing the finished house bed. Pictured: under construction