The smash-hit Broadway musical Hamilton is set to return to Sydney for a second season in 2023.

Australian producer Michael Cassel confirmed he wanted to bring the show, which will open in Melbourne next March, back to stages in Sydney. 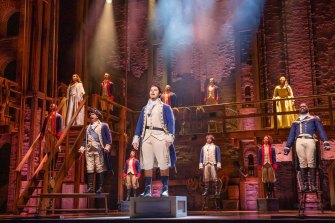 Hamilton broke box office records when it opened in Sydney in March.

Cassel has turned down an offer by the operator of Sydney Lyric, where Hamilton has been staged since its Australian premiere in March, for a return six-month season because he wanted the show to have a longer run.

“We would like to return for a minimum of nine months,” Cassel said. “We would all like to return as soon as possible. I’m hopeful and the good thing is everybody is keen to make it happen.”

The story of America’s founding fathers, which broke box office sales records ahead of its opening, will be in Melbourne until early 2023.

The pandemic restrictions forced the cancellation of more than 130 performances across 14 weeks of lockdown in Sydney. Hamilton reopened at Sydney Lyric last week at 75 per cent audience capacity, but Cassel believes there is strong demand for more tickets. 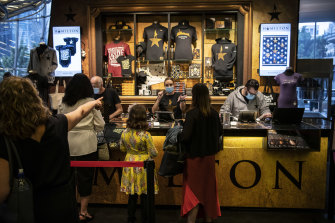 Hamilton received a significant share of $75 million set aside in June by the NSW Government to carry performance companies and operators through the COVID-19 crisis. The NSW Government said funding for primary applicants was capped at $12.5 million.

Arts Minister Don Harwin backed a return season: “It was magnificent for the international blockbuster Hamilton to make its Australian debut in Sydney, and we’d be delighted to welcome it back.

“Theatre brings tourism, jobs, and excitement to a city and this government is committed to making sure Sydney is the Broadway of the Southern Hemisphere.”

Foundation Theatres, the operator of the Sydney Lyric, offered a six-month season in 2023, according to two sources knowledgeable of the negotiations. 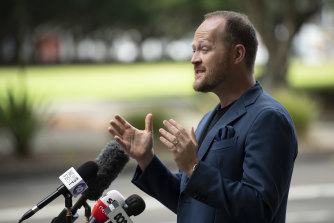 It had also offered to make room in the theatre calendar to allow the Lin-Manuel Miranda musical to have an extended run in Sydney, they said.

Cassel confirmed he had been offered a return run of “several months” at the beginning of 2023 but said it had conflicted with other contractual commitments and had shoe-horned the show into a limited run.

“Whilst filling theatre [it] does not optimise the potential of Hamilton in the Sydney market,” he said.

Behind the scenes, producers and venue operators in various states have been trying to make space for shows impacted by lockdown.

“Recently, we did attempt to negotiate, with other affected producers, to secure a longer run in Sydney in 2022 and move contracts about with the generous agreement of the producers involved but the various venues could not agree for reasons that are completely understandable – contractual obligations,” Mr Cassel said.

The negotiations over Hamilton have taken place as a major push is under way for new theatre spaces in Sydney.

Foundation Theatres and The Star have announced plans to transform and repurpose the 4000 seat Event Centre on podium level of The Star Casino into a 3000 seat two-theatre complex.

To be funded privately at no cost to taxpayers, the proponents say the project would deliver to Sydney the theatre infrastructure necessary to accommodate the city’s growing needs for the next decade.

The plans include a 1550 seat Broadway-style theatre on two levels capable of hosting large-scale musicals, dance, drama, concerts, ballet and opera with a full fly system and orchestra pit.

Also proposed is a 1000-seat comedy and live entertainment theatre for comedy, live music, cabaret, plays and small-scale productions. Plans are expected to be lodged with the Department of Planning by Christmas.

At the same time, Michael Cassel Group has declared itself cashed up and in the market for a new 1500 seat theatre in the Sydney CBD with $80 million to spend.

Hamilton opened in London’s West End in December 2017, shut last March because of COVID-19, and resumed playing in August.