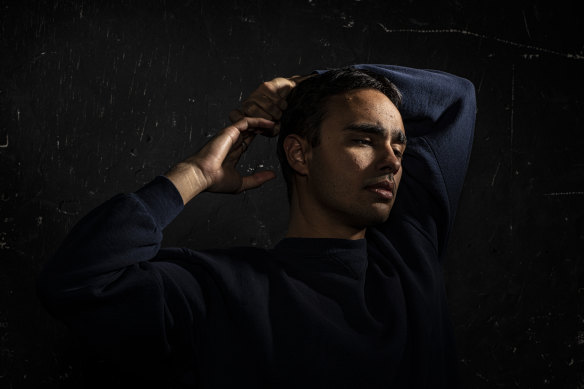 For a young actor, the industry clout that comes with winning an AACTA (Australian Academy of Cinema and Television Arts) award is both generous and surprisingly immediate, as Heartbreak High breakout Thomas Weatherall recently discovered.

“I didn’t realise it was a thing, but suddenly, that night, a lot more people come up and talk to you once that trophy is in your hands,” the 22-year-old laughs. “Once you have that trophy, it all starts.”

Weatherall won for best supporting actor in a drama for his role as nice guy Malakai in Netflix’s hit reboot of the ’90s teen soap, upstaging a stacked field of established names including Steve Bisley, Brendan Cowell, Daniel Henshall and Damon Herriman. If his fledgling career was already on the uptick last year after a recurring role on the Seven drama RFDS, his eye-catching turn on Heartbreak High has quickly vaulted him to another level.

“I’ll admit, I went into that show not knowing if I was gonna pull that character off and still slightly terrified before it came out, like, did it come to fruition?” Weatherall says. “But, you know, apparently it did.” 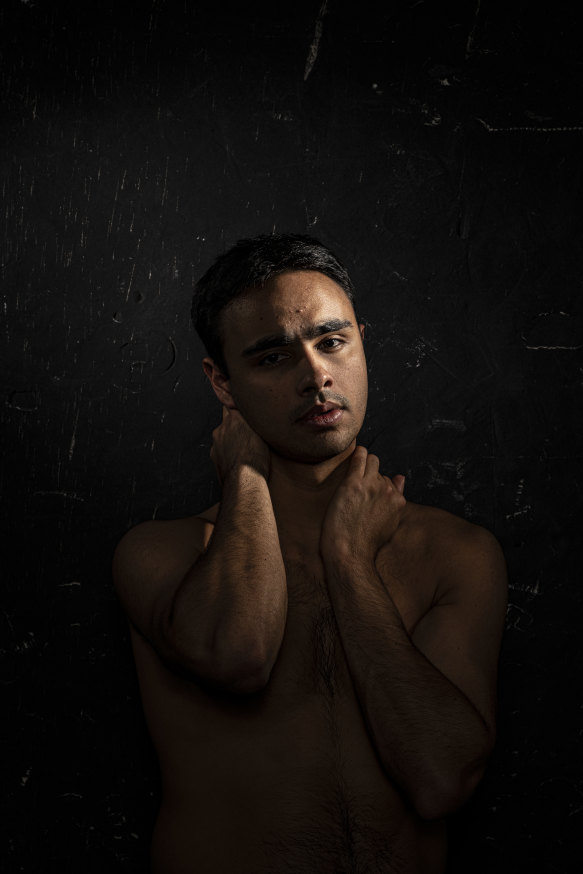 Thomas Weatherall says he started writing his play Blue as “a sort of therapy”.Credit:Wolter Peeters

A demanding coming-of-age role that showcased his dynamic range – from playful young love to what may have been the series’ emotional peak, Malakai’s tortured self-implosion after confronting racist police brutality – Weatherall “feels lucky” he got the opportunity to both flex his dramatic muscles and explore his Kamilaroi heritage on a global platform as big as Netflix’s.

“It’s an amazing step forward, the fact that you’ve got an Indigenous character as the main love interest in a massive Netflix show – five years ago, that doesn’t happen,” he says. “I’ve joined this industry at a time where it’s much more receptive – still not completely receptive, but I definitely have had it easier than other people I respect in this industry.”

This early in his career, it felt like a gift, he says, to find a role that didn’t just ask him to be “the pretty boy-next-door” or require him, as an Indigenous actor, to “handle all the heavy stuff in the show”.

“It was like, we’re actually going to paint a proper picture of this young Indigenous man: he’s complicated, there’s good and bad in him, he makes mistakes but he’s also a victim. And in urban Australia, too! Because as soon as a lot of people write Indigenous storylines, they feel they have to set it somewhere on country, and it’s like, no, we’re everywhere, let’s not pigeonhole like that… When you read it, you’re like, ‘Of course I want to play that role!’” 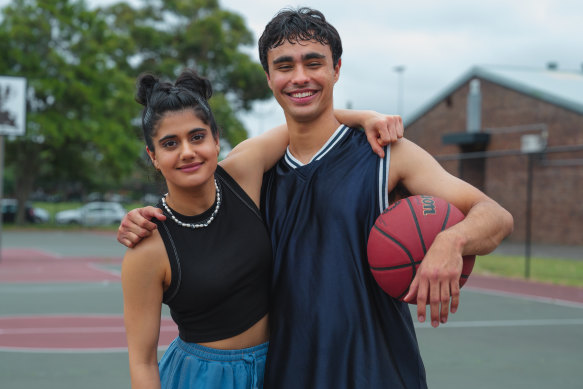 Ayesha Madon and Thomas Weatherall in a scene from Heartbreak High.

The youngest of five children (his father was a former rugby league player who now works in government; his mother a former swimmer turned teacher’s aide), Weatherall was raised in Rockhampton and Brisbane and only moved to Sydney last February due to filming demands. Growing up, he’d initially followed his older sister into dance, studying contemporary and tap, and had planned on pursuing a career as a contemporary dancer.

“Completely and utterly, that was the goal. It was like 30-plus hours a week of training from the age of six onwards. Very strict, very intense,” he says. “It’s weird to be like, ‘I was good!’, but, I mean, I probably could have had a career in dance, and arguably an easier career, if I’d stuck with it.”

A love of film and theatre led him to drama classes in high school, and in year 12, after being tipped off to a casting agent who was looking for “different ethnicities, cultures” for the ABC web series Deadlock, he successfully auditioned and booked his first acting job.

“This was in 2017. I got it, it was the best. But even while I was doing it, there was a part of me going, ‘Maybe I can still do dancing…’” he recalls. “But that was the job that got me signed by the agents I’m still with, and so that was it. It just kind of unlocked something.”

Along with the second seasons of Heartbreak High and RFDS, in 2023 Weatherall will also appear in the Disney+ Original, Last Days of the Space Age, which was filmed in Sydney. Meanwhile, he’s pivoting away from such big-scale productions to act in Blue, a one-man play he wrote as part of his 2021 Balnaves Aboriginal and Torres Strait Islander Fellowship with Belvoir St Theatre. He started writing the play four years ago, but locked into it during the pandemic, while he was in Broken Hill filming RFDS. 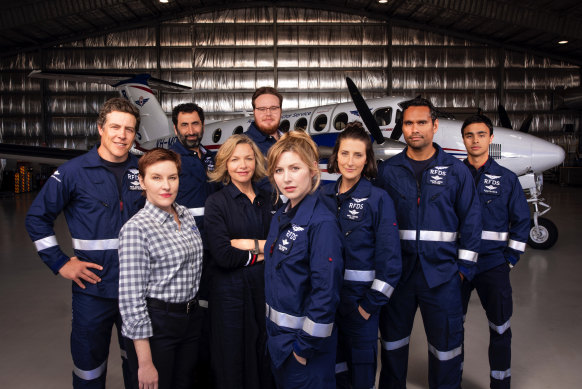 “I was in a pretty bad place mentally,” Weatherall says. “It’s been something I’ve had my struggles with, on and off, and for some reason this episode felt different, more severe or intense than the others, and I didn’t really have any coping mechanisms. I’d lost a few mates that year and I was finding I was kind of drifting apart from people, very isolated. So I was like, well, what do I do instead? So I started writing.”

Framed around the fragile relationship between a young man, Mark, and his mother after Mark has moved out of the family home for the first time, Weatherall remains guarded about the play’s material. A mood board in Belvoir’s rehearsal space hints at a melancholy aquatic motif and mid-rehearsal discussions between Weatherall and his director Deborah Brown find the pair pondering the mechanics of having Weatherall submerged in water during the production, even stripping down on stage. 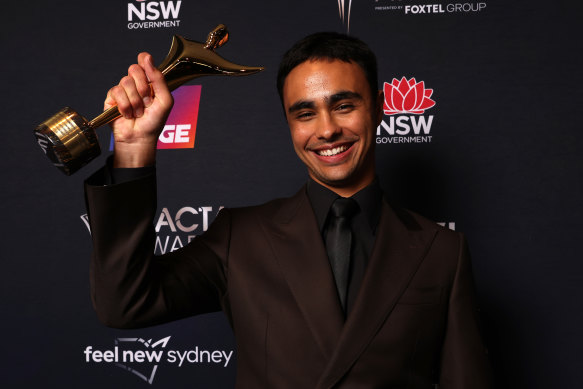 Thomas Weatherall with his AACTA for best supporting actor in a drama.Credit:Getty

“I like to refer to it as ‘very personal fiction’ because the events that happen in the play have not happened to me but, like I think a lot of first-time writers do, you write from things you know,” says Weatherall. “I used [the play] as a sort of therapy, a safety blanket – that thing of being able to exorcise quite deep-rooted existential fears and thoughts and questions without having to actually put the onus on myself.

“Mark, he’s been dealt this deck of cards that aren’t in his favour, and he’s kind of stuck going, ‘How do I move forward with this?’ ” Weatherall continues. “I always had this idea that those big concepts happen when you’re, like, at least 35 – you know, experienced, grown up. Then suddenly you’re 17 or 18 and something happens, and you go ‘Oh, I wasn’t ready for that yet’, and how do you move on with your life when the odds are seemingly stacked against you?”

The production is quite intimate, with just Weatherall onstage and a small team of stage managers on hand – real nuts and bolts stagecraft and quite a contrast, I imagine, to a Netflix or a Disney production. 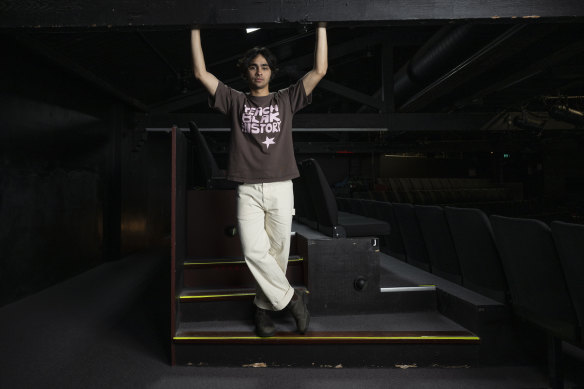 Thomas Weatherall’s Blue will be at Belvoir St Theatre as part of Sydney Festival.Credit:Louie Douvis

“I’m an incredibly introverted and private person, and one thing I never realised, falling into acting, is you lose that a lot of the time. In fact, it’s kind of a sign of success if you do lose that. It’s a lovely problem to have but a weird one to get used to, and you feel like such a pretentious actor, and Imposter Syndrome kicks in, when you talk about it,” Weatherall says.

“But it’s like, I view this as a job, and I actually like the process of waking up and doing a vocal warm-up or reading a script and having to figure it out on the floor. Spending 10 hours a day doing that – like, you finish the day and your clothes are dirty and you’re tired and you just want to sleep – you feel like you’ve achieved something.

“And so I find actors who complain about being actors are the silliest people in the world. Because the fact I get paid to do this, especially when so many people want it and never get it? It’s just obnoxiously special.”

Blue is at Belvoir St Theatre from January 14 to January 23.