Moment tearful parents wait to learn if their son has suffered life-threatening brain damage after cracking his skull in a fight in 999: Critical Condition

Parents whose son cracked his skull in a fight left viewers ‘in tears’ on last night’s 999: Critical Condition.

Yvonne and her husband, whose name was not shared, were called to Royal Stoke University Hospital, Stoke-on-Trent, after their son Dan, 29 fell and cracked his head during a fight and learned he might have sustained life-changing injuries.

In a heartbreaking moment, Yvonne is seen calling Dan her ‘baby’ as she stands over his bed while her husband becomes emotional as he says: ‘He’s all I’ve got’.

Viewers were moved by the raw emotion shared by Yvonne and her husband.

One tweeted: ‘This is killing me off already.’ Another wrote: ‘When his mum said “Oh baby”,’ said another with a crying emoji.

A third added: ‘His parents anguish shows you never stop being their baby.’ 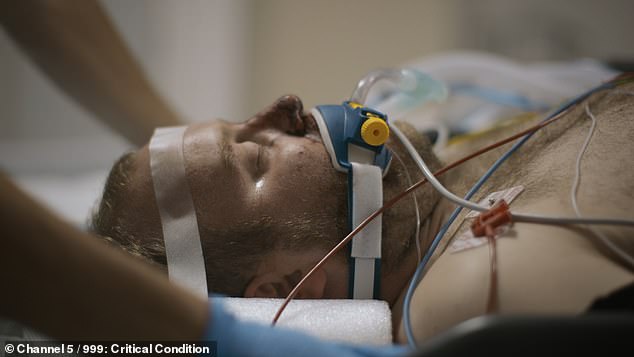 Two distraught parents wait to hear about their beloved son’s fate on tonight’s 999: Critical Condition on Channel 5. The couple were called to the Royal Stoke University hospital in Stoke-on-Trent after their son Dan, 29 (pictured) fell and cracked his head during a fight and wound up in A&E under the care of trauma team leader Richard Fawcett

The couple arrived in A&E distraught and crying to find their son awaiting further exams and covered in blood. There, they anxiously awaited more news.

When his parents visited, Dan was still unconscious, and doctors still knew little of his condition, meaning they could only give limited information to them.

‘Oh baby,’ his mother crids, gently caressing his cheek, as his father sat by his side.

Moments before, the couple were told that either their son could come out of the ordeal ‘as good as new,’ or the injury could be life threatening.

They were also told the team needed to insert a probe in Dan’s skull to measure the pressure inside his brain and see how his brain was coping.

As Richard explained that he understood seeing their son like this could be distressing, he tried to reassure them by saying everything around him was meant to make him get better. 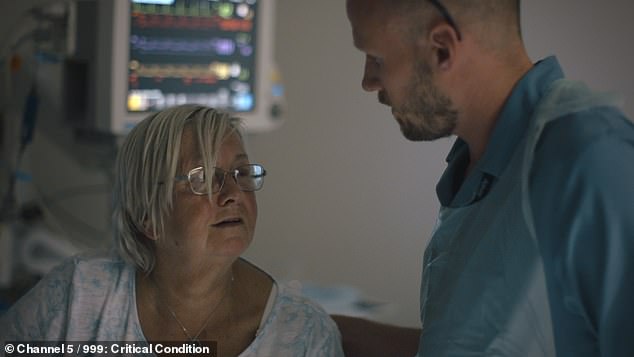 Dan’s mother Yvonne, is pictured at Dan’s bedside with a loved one while waiting for him to regain consciousness

‘I know it’s distressing to watch but all this is purely to protect him,’ he told them.

‘I find it hard to talk to a relative when you can’t really tell what’s going on because you’re so short in that patient’s journey, you don’t really have any answers for them,’ he explained later to the camera.

Dan father could be seen gently stroking his son’s arm as he listened to the doctor, before telling a nurse through tears: ‘he’s all I got.’

When Dan arrived at the A&E of the Royal Stoke, he was already unconscious after sustaining a skull injury during a fight.

After an initial exam where they checked his pupils and vital signs, the team of carers, led by Dr Richard Fawcett, took the 29-year-old to more exams. 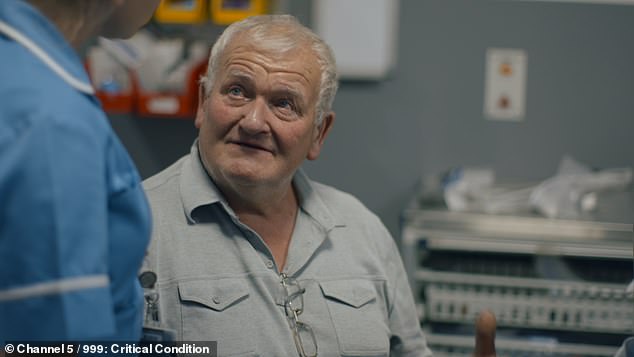 Dan’s father, whose name wasn’t revealed, appeared distraught as he visited his son in the A&E

After Dan’s parents visit, the hospital’s neurosurgeon on call that evening went through the operation in order to probe Dan’s brain.

‘The risk of performing a procedure on the brain, you might end up with a stroke, seizures, long term disabilities, the procedure itself might be life threatening,’ he explained. 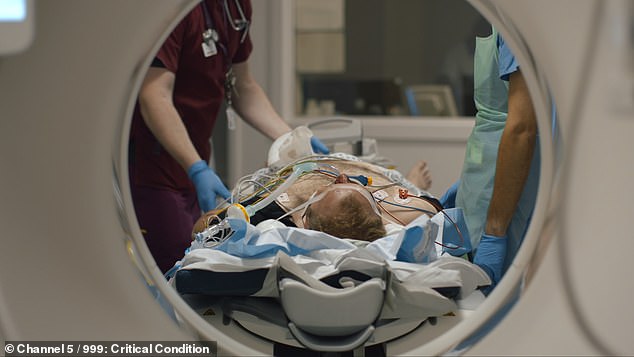 Dan went through a CT, which determined he had a bruise on his brain which caused swelling, and he was bleeding internally as well 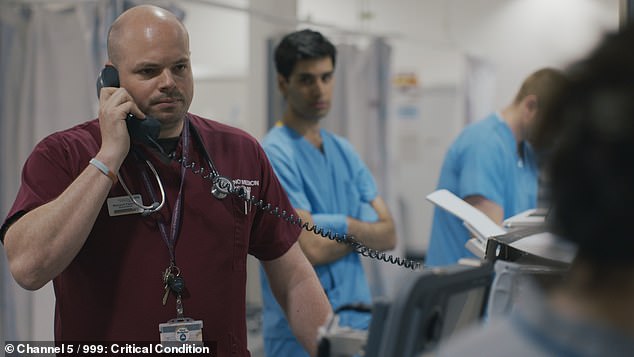 ‘Because we’ve put him to sleep and we’ve kept him sedated we have no idea what the brain is doing. It’s like being in a dark room, walking around without any clue,’ he added.

Thankfully, however, we saw Dan in much better health later on in the show, four days after he was brought in.

We learned that he is now finally doing better thanks to physiotherapy, however, he has suffered many months of hearing and balance issues after his accident, as well as having contracted Bell’s Palsy as a complication.

Bell’s Palsy is a type of partial facial paralysis, which occurred after Dan had left the hospital.