Home » Lifestyle » ‘Hope for the future’: Well-timed cuttings may save tree from rusting away

Cuttings of a critically endangered eucalypt, taken just months before the devastating Black Summer bushfires, may be the only viable path to survival for once-common scrub turpentine trees.

Since it was first detected on the NSW Central Coast in 2010, myrtle rust has ravaged vulnerable species across the country. Scrub turpentine has no defence against the exotic fungus, which stunts growth and causes defoliation and plant death. 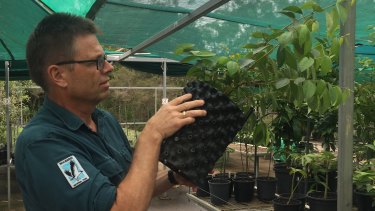 Governments last year took cuttings from remnant populations of scrub turpentine, which blooms with pinkish red flowers, to help with re-population in the wild and cultivation in nurseries and botanic gardens.

Scrub turpentine hangs on only in the forests of the NSW South Coast, where the Black Summer fires burnt much of the species' natural range of sub-tropical rainforest and wet sclerophyll forest.

Federal Environment Minister Sussan Ley said scrub turpentine might have been lost in the fires if not for the serendipitous timing of an ongoing conservation program.

"While it is still too early to say with certainty, there is every reason to suspect the horrendous summer fires would have destroyed those specimens remaining in the wild," Ms Ley said on Sunday, which is National Tree Day.

"Scientists have still not been able to return to the area for a comprehensive review, but the successful propagation by Parks Australia provides hope for the future of the species."

Booderee National Park Botanic Gardens collections officer Stig Pedersen said it was essential to the long-term survival of scrub turpentine to ensure genetic diversity in cuttings so breeding populations were as robust as possible.

"If we don't get diversity, you end up with inbred pants that only have one line of genetics," Mr Pedersen said. 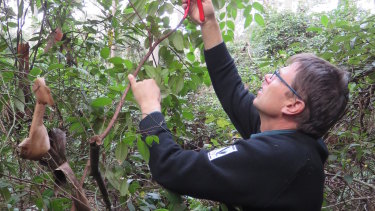 The program has sourced cuttings from 18 sites with up to 24 different lines of genetic material, with successful propagation including at Booderee.

"We need them for an insurance policy," Mr Pedersen said. "We can't let the scrub turpentine disappear in the wild.

"It used to naturally occur from Batemans Bay to Bundaberg and until the onset of myrtle rust no one paid attention to it. Now it is rapidly dying and I hear it's in a really bad state, particularly in northern NSW and Queensland."

It is not known how myrtle rust entered Australia. It threatens the Myrtaceae family of plants, which includes Australian natives such as bottle brush, tea tree and eucalypts. Fungicide kills myrtle rust, which can be an effective treatment in gardens and nurseries but is not feasible on the scale required to benefit wild populations.

The most important news, analysis and insights delivered to your inbox at the start and end of each day. Sign up to The Sydney Morning Herald’s newsletter here and The Age’s newsletter here.