NSW households could pay as much as $60 extra per year to cover a $2 billion blowout in the cost of a new transmission link to take power supplied by the Snowy 2.0 pumped-hydro project.

Transgrid now expects its proposed HumeLink – a 500-kilovolt line connecting Wagga Wagga, Bannaby and Maragle – to cost $3.317 billion, up from $1.35 billion estimated in January 2020. That would make it “by far the most expensive transmission project” in Australia, said Bruce Mountain, director of the Victoria Energy Policy Centre and a co-author of a new assessment of the plan. 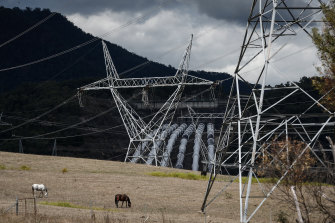 Snowy 2.0 will provide 2000 megawatts of generating capacity and 350 gigawatt-hours of storage.Credit:Alex Ellinghausen

Transgrid blamed the higher costs on higher prices for steel and other construction materials. Environment offsets to compensate for the pylons cutting a swath through the Kosciuszko National Park will also cost $935 million.

Craig Stallan, an executive manager at Transgrid, though, said the project was “a fundamental enabler” for new renewable energy supply to be added to the grid. It was “not just for Snowy 2.0”, the plan to expand Snowy Hydro’s generation and storage capacity launched by then Prime Minister Malcolm Turnbull in 2017.

HumeLink claimed in its submission to the Australian Energy Regulator in July that the project would have a net benefit of $491 million for consumers. That sum excluded a price on carbon emissions avoided from fossil fuel plants and gains created in regional towns from the major construction.

However, Dr Mountain noted that Transgrid admits to “a high degree of uncertainty” to its revised figure, offering a range between 30 per cent lower to as much as 50 per cent higher. At $3.317 billion, though, that still implies the asset base of the privately-owned company will swell by half and its transmission tariffs by about 40 per cent, increases it can pass on to consumers.

If approved the project would lift NSW household tariffs by about 4 per cent, raising average annual bills of about $1500 by $60, he said.

Dr Mountain said many other transmission ventures are vying for funds as solar and wind farms jostle to get on the grid, and the public deserves greater transparency on what gets approved and who pays. Commonwealth-owned Snowy Hydro, for instance, says it shouldn’t pay for HumeLink.

“If we don’t build HumeLink, we can build other things,” he said. 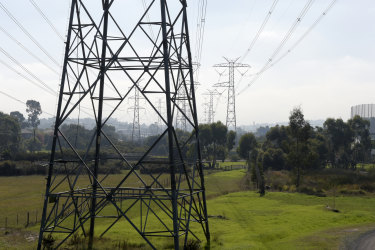 Dylan McConnell, a University of Melbourne energy researcher, said he had been “quietly surprised how little attention the transmission question has received”.

The Australian Energy Market Operator (AEMO), for instance, recently released its Transmission Costs report with little of the media attention generated by “big bang” reports such on electricity opportunities, he said.

That oversight might not last as projects such as the VNI-West (previously dubbed KerangLink), the Ballarat-Wagga connection proposed to help Victoria tap into Snowy 2.0, also have had costs blow out. VNI-West’s bill has gone from $2.4 billion to $4 billion, Mr McConnell said.

For its part, Snowy Hydro said there was “broad industry consensus” that significant investment would be needed to decarbonise the National Electricity Market (NEM) as coal-fired power plants drop out.

Snowy 2.0 will provide 2000 megawatts of generating capacity and 350 gigawatt-hours of storage, with the extra so-called firming capacity supporting the construction of an additional 4 gigawatts of wind and solar farms, a Snowy Hydro spokesman said. Over time, other plants will join the grid.

“Why would Snowy Hydro pay for transmission lines that connect 20,000 megawatts of wind and solar to close to 12 million Australians?” he said, referring to Sydney, Melbourne and Adelaide users.

Federal Energy Minister Angus Taylor was approached for comment. The minister and AEMO have previously identified HumeLink as a priority project.

“Additionally, the cost associated with any transmission upgrade will be more than offset by having some of the cheapest forms of electricity generation and storage anywhere on the planet,” Mr Kean predicted.

His Victorian counterpart, Lily D’Ambrosio, said the KerangLink cost blowouts were “due to increases in estimates on the NSW side of the project, and these need to be reined in. The Victorian costs have remained largely unchanged at $1.3 billion”.

“We will continue to work with the Commonwealth Government to progress vital transmission upgrades that unlock renewable energy, but we won’t lump Victorian consumers with unnecessary costs to fund the project,” Ms D’Ambrosio said. “If the Commonwealth want to deliver KerangLink, which is so critical to their Snowy Hydro 2.0 scheme, they simply have to do more.”

Simon Corbell, chief executive of the Clean Energy Investor Group, said it is “critically important that we expedite transmission projects such as HumeLink” as part of wider climate change action.

“Stopping HumeLink will only delay and deny the opportunity for a more rapid decarbonising of the NEM,” Mr Corbell said. “That’s not something we can forgo.”