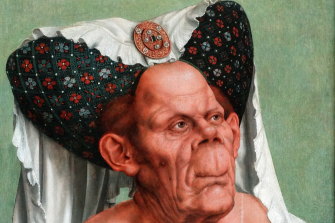 There is no evidence that the duchess was a real person: Quentin Matsys’s The Ugly Duchess (c.1513)Credit:Getty

Ten years ago in Munich, in an exhibition of German Renaissance portraiture, I came across a startling image from 1550 of Duke Wilhelm IV of Bavaria on his deathbed. The Duke wasn’t expiring in a peaceful, dignified manner, he was already gone. One eye was almost closed, the other staring sightlessly at an angle. The mouth was twisted into a grimace as the result of a stroke. His face was a sallow, yellowish colour.

The artist, Hans Muelich, had been a court painter and may have thought he was saying farewell to his meal ticket, although he would continue to work for Wilhelm’s son and successor, Albert V. It’s clear Muelich was not a flatterer as he made no attempt to portray the dead man as anything but dead. He was most probably one of those pious, ruthlessly honest artists of the time who felt it was their duty, in the eye of God, to give an exact account of what they saw.

The art of the Northern Renaissance is full of elaborate altarpieces in which the Virgin Mary, Jesus and assorted saints are accompanied by the kneeling figures of wealthy donors who paid for the picture. Some donors were amazingly homely. I can remember seeing one with cross-eyes. For a devotional image meant to hang in a church or cathedral, the artist would not cheat with these portraits. Ugly people were not made glamorous for the sake of vanity or posterity. 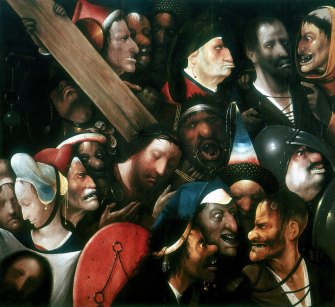 Perhaps the most revealing portraits may be found in genre paintings based on artists’ observations of the world in which they lived. Think of the earthy peasants in Bruegel’s paintings, or the gruesome thugs in Bosch’s Christ Carrying the Cross (1515-16). Bruegel and Bosch would have passed such people in the street every day.

When it came to religious subjects such as the Madonna and Child, artists were free to paint Mary as a beautiful woman, but Baby Jesus was a different proposition. The Church felt it was disrespectful to portray the infant saviour as a toddler, stipulating that He must appear as a fully formed “little man”. This led to many images in which Jesus looks like Alfred Hitchcock, or so withered and creepy He could star in a horror movie. 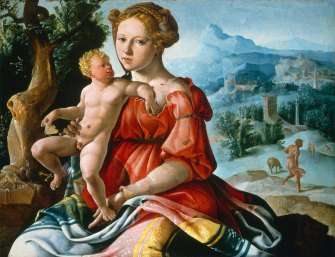 The church decreed that the infant Jesus should look like a fully formed little man: The Rest on the Flight into Egypt by Maerten van Heemskerck, c 1530.Credit:Heritage Art/Heritage Images via Getty Images

One result unforseen by the church is that there are now dozens of humorous internet sites devoted to “ugly Renaissance babies”.

In Europe 500 years ago there were plenty of opportunities to study really ugly people. Hardly anyone bathed, so filth, body odour and skin diseases were facts of life for the poor. The upper classes were not much of an improvement, although they drenched themselves in perfume and wore expensive clothes. In order to keep a tight hold on royal titles and privileges, the ruling families contracted marriages within a small circle that inevitably led to inbreeding. 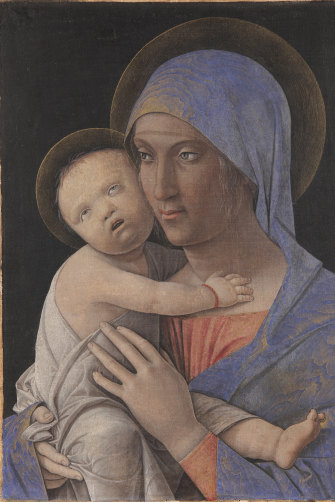 The most famous noble “ugly” portrait must be Quentin Matsys’s The Ugly Duchess (c.1513). It shows an old woman with ape-like features, dressed in antiquated finery, holding a budding flower between her fingers. The work has been interpreted as a satire on personal vanity, implying that no degree of wealth or status can overcome such natural disadvantages. Some believe Matsys used a model who suffered from Paget’s disease, which causes facial deformity, but there’s no evidence the Duchess was a real person. On the wall at the National Gallery in London she stops the most complacent viewers in their tracks.

The Habsburgs, whose family connections stretched from Austria to Spain, had wealth and power but not the looks. Distinguished by a massive jaw, a long nose and fleshy lips, the Habsburg males are an unprepossessing lot. Velázquez worked hard to portray Philip IV (1605-65) as a heroic figure, but he couldn’t disguise those characteristic features. Philip, however, is a matinee idol in comparison with his son, Charles II (1661-1700), whose jaw was so large it impeded his speaking and eating. Charles suffered from chronic sicknessand would die at the age of 38. 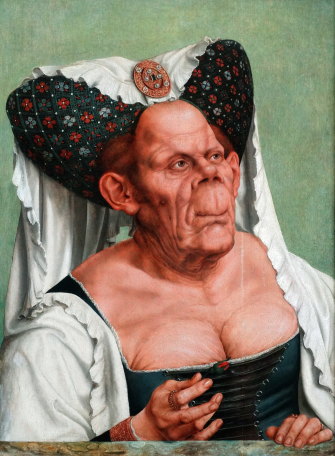 There is no evidence that the duchess was a real person: Quentin Matsys’s The Ugly Duchess (c.1513)Credit:Getty

Juan Carreño de Miranda painted the unfortunate king’s portrait but could do little to downplay his visage. Despite the French ambassador reporting that Charles “was so ugly as to cause fear and looks ill”, he was married twice, to the daughters of French and Austrian nobility, who took the blame for the king’s inability to produce an heir.

If Elizabeth I of England is always shown with her mouth closed it may be because of her black and rotten teeth.

The Bourbons, who would succeed the Habsburgs as the rulers of Spain, were hardly more attractive. Goya’s 1786 portrait of Charles III in his hunting outfit, shows a weedy, round-shouldered specimen with a big nose, playing the role of a mighty hunter. He looks like a wizened child wearing his father’s jacket. Even the dog slumbering at his feet gives the impression he can’t bear to lay eyes on this sad spectacle. Yet, fortunately, Charles was apparently pleased with Goya’s efforts.

The truth is, not much could be done with such material. If Elizabeth I of England is always shown with her mouth closed it may be because of her black and rotten teeth. (She reputedly brushed with sugar paste!) What Elizabeth lacked in personal charm was supplied by extravagant gowns and accessories. 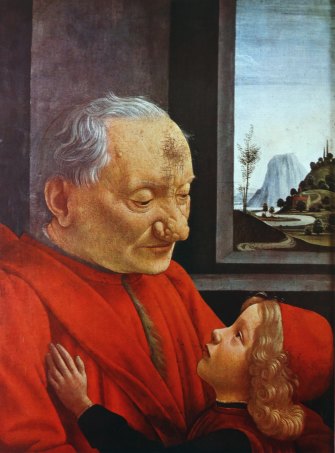 A truly tender work: Domenico Ghirlandaio’s An Old Man and his Grandson (c.1490).Credit:Getty

A very different kind of “ugly” portrait was Domenico Ghirlandaio’s An Old Man and his Grandson (c.1490). It shows a grandfather with a grotesque, lumpy nose, staring affectionately at a fresh-faced little boy. The nose, caused by a condition called rhinophyma, is what inevitably catches our eye, but we soon recognise that this is a truly tender work, showing a bond between battered old age and innocent youth. Ghirlandaio invites us to ignore the old man’s nose and see him as a good-hearted person.

In the 20th century, artists decided they could dispense with conventional beauty. In its place there would be a cavalcade of fractured features, intense expressionistic portraits and in many cases, a celebration of ugliness. Yet it was rare for an artist to produce a deliberately ugly work, no matter what the public believed. What we find in the art of the Cubists, the Fauves and the Expressionists, is akin to the “terrible beauty” Yeats wrote about in his poem, The Second Coming (1919).

You want to paint my lacklustre eyes, my ornate ears, my long nose, my thin lips – things that can only frighten people and delight no one?

One of the most fascinating ugly portraits of the modern era is Otto Dix’s Portrait of the Journalist, Sylvia von Harden (1926). This work, which has become an icon of the Weimar period, shows Von Harden exaggerating her own unattractive features to theatrical effect. In her boyish haircut, her monocle, her stylish dress, her cigarettes and cocktail, she has refashioned herself as a living artwork – an androgynous, avant-garde ornament of cafes and nightclubs. When Dix asked Von Harden to sit for the portrait, she allegedly replied: “So you want to paint my lacklustre eyes, my ornate ears, my long nose, my thin lips. You want to paint my short legs, my big feet – things that can only frighten people and delight no one?”

That’s exactly what Dix wanted to paint, and in doing so he created a fascinating, almost hypnotic portrait. In contrast to his brutal pictures of war invalids, soldiers and psychopaths, Dix found a genuine allure in Von Harden and her cultivated artificiality. 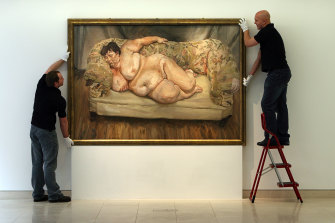 Benefits Supervisor Sleeping (1995), a portrait of Sue Tilley, by Lucian Freud sold for US$33.6 million Christie’s in 2008.Credit:Getty

Although Freud painted in a realistic manner he came of age as an artist at a time when concepts such as beauty and ugliness had been turned on their heads by modernists intent on challenging Keats’ view that “beauty is truth, truth beauty”. In the 20th century truth was still valued, but now it could be abstract, transcendent, scarifying. Beauty, on the other hand, had become soft and suspect. Today there are many artists who feel, almost instinctively, that the precondition for true beauty is to be neither frightened nor ashamed of being ugly.

Which charity shops are opening on April 12 and how can I donate to Mind, Oxfam and Barnardo’s? – The Sun