Kat Stewart and Eddie Perfect recall how they stumbled on the right chemistry for Billie and Mick in Offspring. Daina Reid reveals how it was “terrifying” to arrive on set to direct her first episode of The Handmaid’s Tale, for which she subsequently earned an Emmy nomination.

Asher Keddie explains why she regards her performance as Ita Buttrose in Paper Giants: The Birth of Cleo as the “biggest accomplishment in my work in 25 years”. Damon Herriman reveals that he got auditions only for bespectacled good-guy accountant types until a career-changing role led to him playing cult leader and killer Charles Manson – twice.

Dr George Miller remembers why declining the offer of a trailer during the “poisoned production” of The Witches of Eastwick was a mistake in an anecdote that neatly illustrates the differences between working in the US and Australia. It also becomes one of several examples of sage advice from Jack Nicholson, in this case about how in Hollywood “they mistake politeness for weakness”. 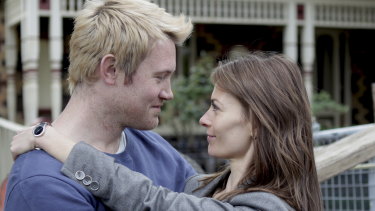 Eddie Perfect and Kat Stewart recall how they found the chemistry between their Offspring characters in the podcast How Big is My Trailer.Credit:Ten

These pearls are among the treasures revealed in How Big Is My Trailer, a five-part podcast made for ABC Radio (airing daily this week, and then available for download) and hosted by broadcaster and producer Angela Pulvirenti and actress Kat Stewart. The pair confesses to enlisting their mates into service for the series, which they’re hoping will be the first taste of a format that they aspire to develop further, perhaps into a TV series.

They bring together pairs of people prominent in arts and entertainment to discuss their careers. Stewart says: “We pride ourselves on unexpected combinations.” They’re good matchmakers because the conversations flow, laughter abounds and the interviews are rich with revealing tales from the frontlines and back rooms. 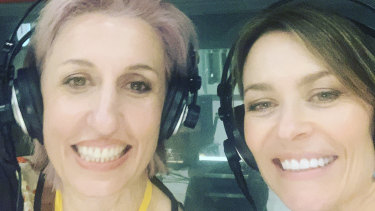 Angela Pulvirenti and Kat Stewart, hosts of entertainment podcast How Big Is My Trailer.

“We’re doing this show to encourage people who want to have a life of creativity,” Pulvirenti says in the first episode, which features film and TV maker Miller with actor, writer and musician Tim Minchin. “But we also want to prepare them for the realities of what they will experience, inevitably.”

The industry’s 95 per cent unemployment rate is mentioned repeatedly. The in-demand Stewart says “it’s a fine line between unemployment and a break between jobs”. References to the importance of luck and timing come up a lot.

In the opener, Miller speaks thoughtfully about a range of subjects: his childhood as the son of a Greek migrant; the way in which budget constraints affected the locations and the look of his breakthrough feature, Mad Max; how his training as a medical doctor came in handy when he detoured into filmmaking.

In the section devoted to career horror stories, Minchin details his years of work on the never-made animated musical, Larrikins. Miller and Minchin discuss how, at different points, they lost their passion for their professions. 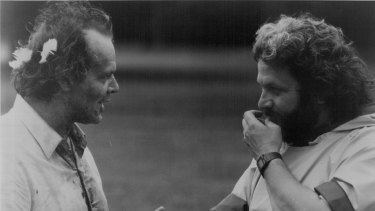 Jack Nicholson with George Miller during the troubled production of The Witches of Eastwick.Credit:WB

Although they hadn’t met before the session, which was recorded over two and a half hours in a Sydney studio with the required social distancing, their union proves productive; two uniquely gifted practitioners discussing their philosophies and careers.

A listener can sense the free-flowing mood in the studio. The interviewees feel that they are among their tribe; they’re expansive, their defences lowered. And that’s fairly rare.

Even if the mechanics aren’t evident in a story, interviews can be a delicate and even fraught affair. Many people involved in the industry, on-screen and behind the scenes, become available only when they have a production to promote.

In that tightly regulated environment, where positive publicity is the priority, there might be no-go areas: sensitive topics that have to be skirted or issues that are deemed to be out of bounds. Publicists can hover protectively to make sure that the talent doesn’t go off-script, perhaps divulging something that someone fears might reflect badly on them or on the product being plugged. 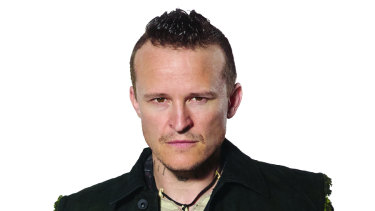 Damon Herriman (Dewey Crowe in Justified) reveals he got auditions only for bespectacled good-guy accountant types until a career-changing role.Credit:FX

Here, the guests arrive ready to talk. They don’t fear that they might be ambushed and the agenda is simply to discuss their experiences in a business that Paul Gleeson, in each episode’s introduction, describes – arguably in overblown terms – as “the most competitive, cut-throat industry ever invented”.

The result is that the participants aren’t limited to a succession of sanctioned and sanitised sound bites. They’re participating because they want to, or because they’ve agreed to do a favour for a friend.

The hosts have done their research and ask thoughtful questions. The only downside is that the interviews can sound a bit gushy. Yes, attention is paid to dark days and bumpy bits, but the series celebrates successful people and notable achievements, and, at times, the accolades become a bit too fulsome. 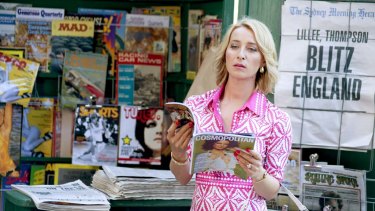 Asher Keddie regards her performance as Ita Buttrose in Paper Giants: The Birth of Cleo as the “biggest accomplishment in my work in 25 years”.Credit:ABC

However, overall, the podcast offers an entertaining and illuminating insight into the messy process of making art and the challenges of trying to establish and nurture a career in a volatile business.

Given the battering that the sector has taken this year, it’s timely and valuable to be reminded of the people who help to make the local industry shine, of their talent, their dedication and the ways in which their work enriches our lives.

‘Ex On The Beach’ Preview: Lexi & A Speedo-Clad Billy Kiss After He Gives Her A Lap Dance