Home » Lifestyle » I spend £4,300 a year buying bottled water to drink and BATHE in

I spend £4,300 a year buying bottled water to drink and BATHE in – and it’s helped with my anxiety, migraines and eczema

A man who will only wash with bottled water has claimed cutting out tap water stopped his anxiety and is worth the £4,300 a year price tag.

John Junior, 34, from Wilmslow, Cheshire, switched from tap water to bottled water five months ago and believes the move improved his health and wellbeing.

After experimenting cutting out different parts of his diet, he concluded that switching out tap water ‘changed my life’, including helping with his anxiety, constant migraines and eczema.

The IT consultant splashes £12 a day in Co-op buying supermarket water to wash with and Fiji water to drink, working out at roughly £360 a month or £4,300 a year. 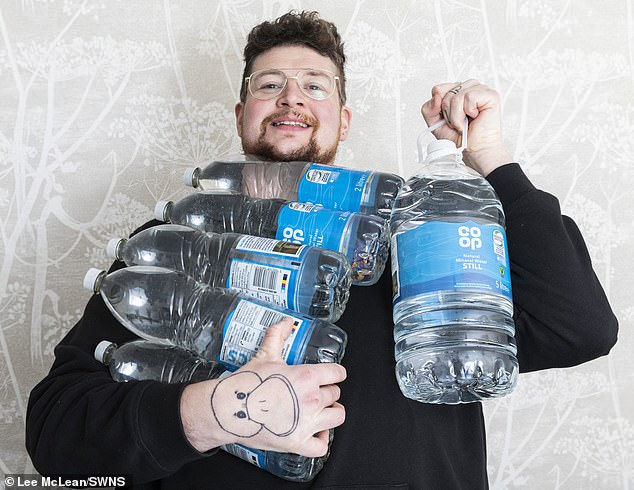 John Junior, 34, from Cheshire, will only drink, wash his clothes, and bathe in bottled water

His daily soak requires 30 litres of water which he bathes in cold – adding just a single kettle of hot water to feel comfortable.

He has cut down on buying takeout coffee and other luxuries in order to afford the water amid the cost of living crisis.

John said: ‘I’m not a scientist – but it’s genuinely changed my life. I don’t know why it works for me. Maybe I’m allergic to the chlorine that they use to disinfect the water. But there must be something in it to make me feel so bad.’

Despite being unable to drive, John says he manages to ferry water in from his local store by delivery or with the help of friends. 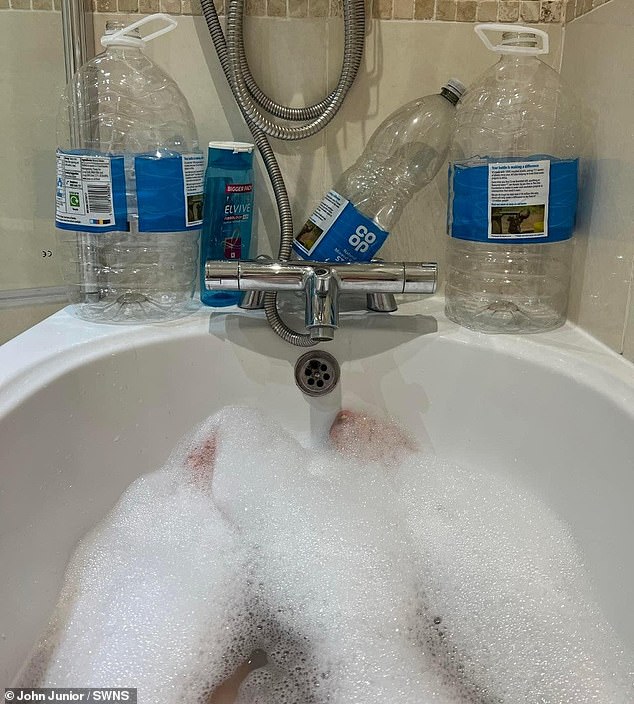 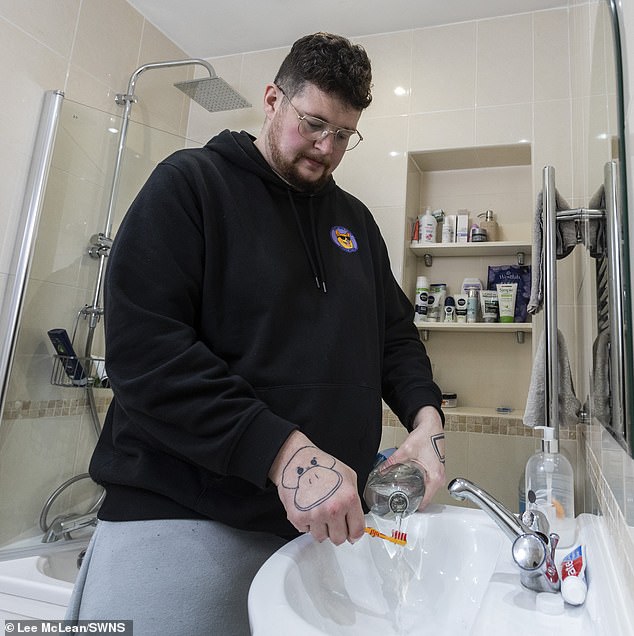 The IT consultant (pictured) said switching to bottled water helped with his anxiety, migraines and eczema

He claims he sometimes has to travel into Manchester to purchase it in bulk when it is unavailable nearby and John has even visited the source of Co-op’s water.

He said: ‘I always call [tap water] the devil’s drink – even though my friends always laugh at me for it. I don’t use it at all. I don’t drink it, wash with it, I wash my clothes in bottled water.

‘I used to struggle with extremely bad anxiety constantly and migraines, and after a while I did loads of experiments on myself to try and stop it.

‘I cut loads of different things out of my diet and eventually I just thought that it just had to be the water – so I tried cutting that out and I just feel so much better now. 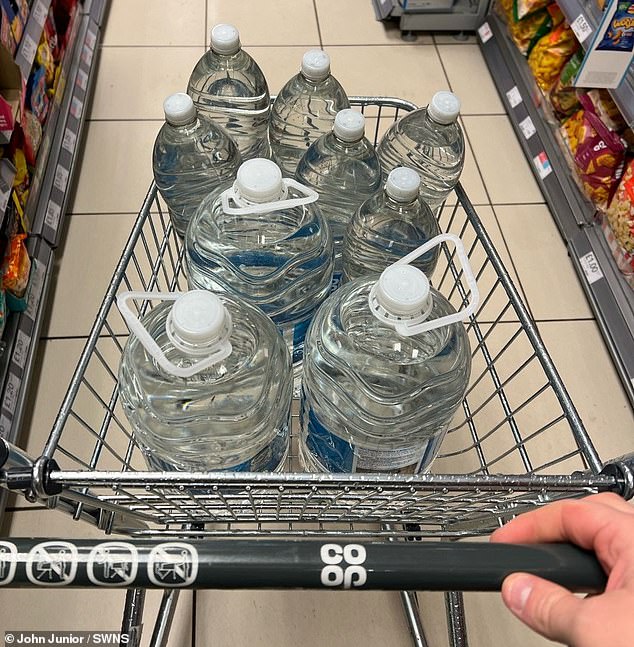 John spends £12 a day in Co-op buying supermarket water to wash with and Fiji water to drink, working out at roughly £4,300 a year 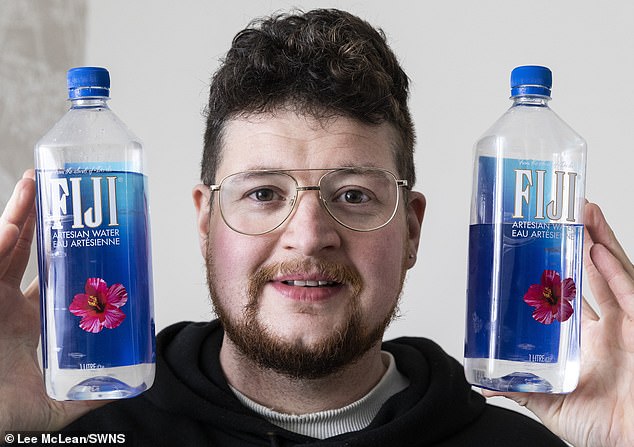 After experimenting with cutting out different parts of his diet, John said cutting out tap water ‘changed my life’ 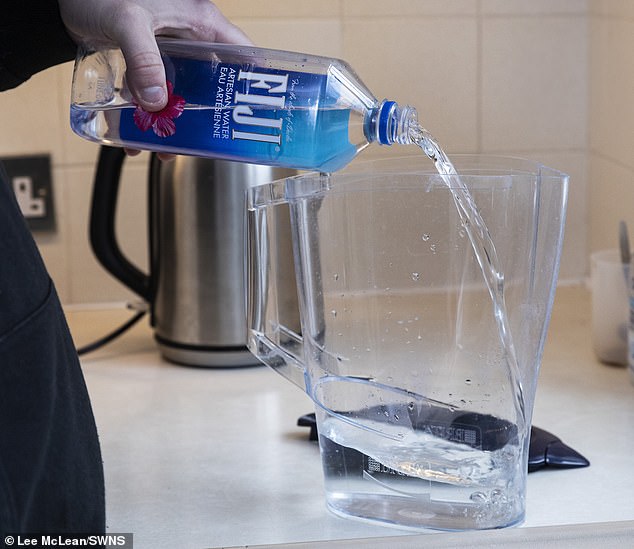 ‘I used to have migraines that would leave me feeling sick and unable to move, but now I get them way less.’

John added: ‘I have PTSD as well after seeing my father die in front of me in 2018, which has become much better since I cut out the tap water.

‘I’d been offered medication to help fight the PTSD but it didn’t work for me, along with loads of other holistic ways like going to the gym, swimming and stuff – none of it seemed to help.

‘From then I’d struggled with my anxiety and even my eczema, but now I’ve cut out the water it feels better. I actually feel healthier – I genuinely think it’s the devil’s drink. 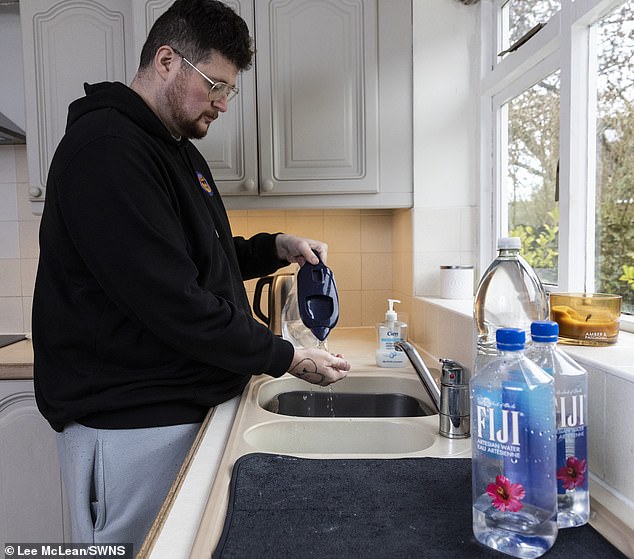 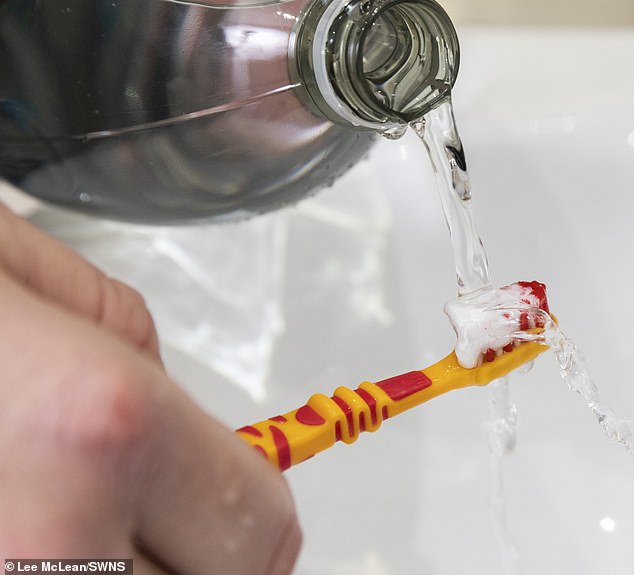 Although the cost is expensive, John cuts down on extra spending so he can afford bottled water

‘I think it’s a multitude of things, like PH balance – there’s more magnesium in bottled water for example, which helps with anxiety.’

He continued: ‘Sometimes I have to shower in my local gym and I find the water there almost feels like bathing in rain water or something. It smelled as well – it’s horrible. If I have a drink of water, or a brew, I feel vile.’

John said he accepts that the cost might seem steep but insists it is manageable because he makes sacrifices.

He said: ‘It does cost £12 a day, which seems like a lot. But if you go to Starbucks with your mates and get a coffee and a cake – you’re already spending nearly that much anyway.

‘So I just cut down on my extra spending, and now it doesn’t seem like it costs so much. I don’t mind paying the extra money to feel better.’

Expert tips to save £600 off running costs for oven, air fryer and microwave

'Dimitri the Lover': The convict behind the wild viral TikTok voicemail