‘You want a SLAVE’: Nanny job listing goes viral thanks to employer’s insane list of demands that includes cooking, cleaning, tutoring, errands, and caring for kids AND pets – for just $13 an hour

Thousands of people are horrified by a shockingly unreasonable job listing for a nanny who also cooks, cleans, tutors, runs errands, cares for the pets, does the grocery shopping, and more — all for just $13 an hour.

In addition to a mind-blowing list of responsibilities with very low pay, the job also has some eyebrow-raising requirements, including the ability to speak multiple languages, a Bachelor’s degree, a completely flexible schedule, and an age between 25 and 30.

A screengrab of the job posting was shared on Reddit this week, where the anonymous parents were widely mocked and ridiculed. 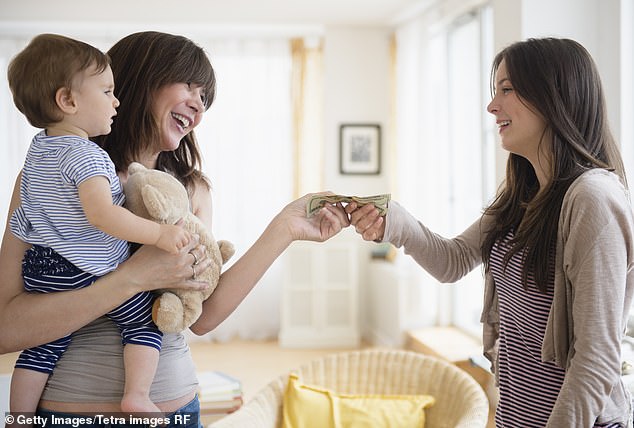 Yikes: An unreasonable job listing asks for a nanny who also cooks, cleans, tutors, runs errands, cares for the pets, and more — all for just $13 an hour (stock image) 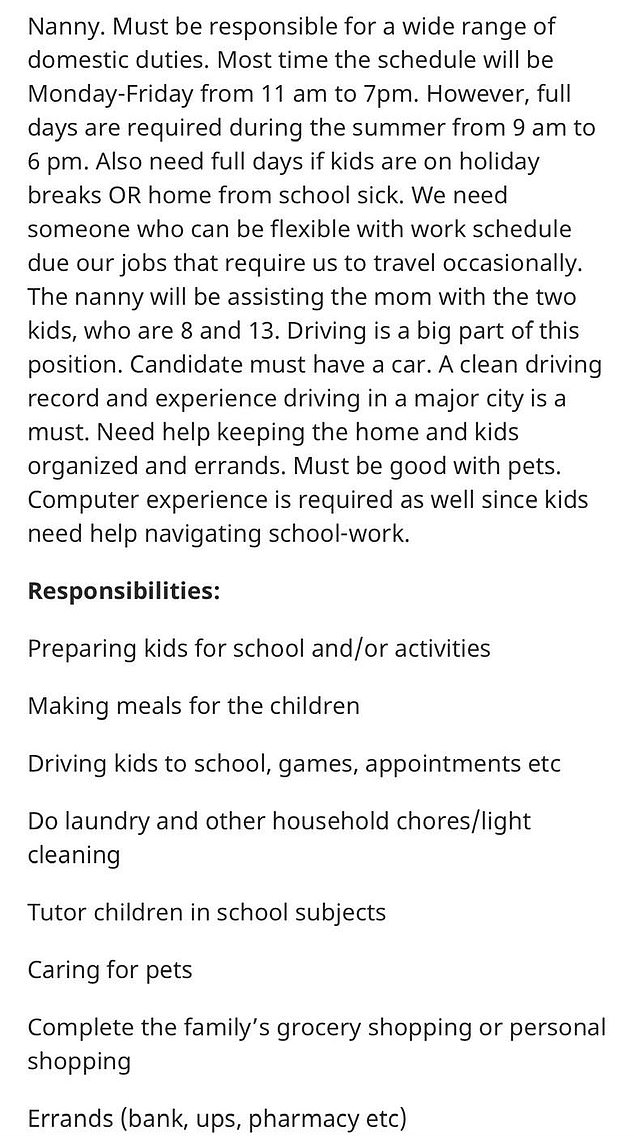 Mocked: A screengrab of the job posting was shared on Reddit this week, where the anonymous parents were widely mocked and ridiculed

The very lengthy job listing begins by saying that the selected applicant ‘must be responsible for a wide range of domestic duties.’

That’s an understatement. The selected applicant will be tasked with caring for children ages eight and 13 — which includes preparing the kids for school and activities, making meals for them, driving them to school and other appointments, and even tutoring them.

They’ll also be responsible for a slew of household tasks, including doing laundry, cleaning, completing other household chores, caring for the pets, shopping for groceries and other ‘personal’ items, and running errands like going to the bank or pharmacy.

Somehow, the poster expects to find someone willing to do all of this for just $13 an hour.

What’s more, they will need to be completely flexible with their schedule.

‘Most time the schedule will be Monday-Friday from 11 am to 7 pm. However, full days are required during the summer from 9 am to 6 pm. Also need full days if kids are on holiday breaks OR home from school sick,’ it reads.

‘We need someone who can be flexible with work schedule due [to] our jobs that require us to travel occasionally.’

Just as shocking as the responsibilities is the job’s list of requirements.

The family doing the hiring says the nanny must be between 25 and 30 years old, have a Bachelor’s degree or equivalent, have two years of experience as an au pair or live-in nanny, and be bilingual in Spanish or Portuguese.

They must be able to provide good reference, must have a car and a clean driving record, and should be ‘involved with art and sports.’

Other requirements include ‘knowledge in Microsoft Office’ and ‘willingness to adhere to health and safety standards.’

A list of desirable traits include ‘trustworthy and responsible,’ ‘ability to be respectful, compassionate, flexible, and have strong ethics,’ ‘good time management skills,’ ‘outstanding communication and interpersonal skills,’ and ‘ability to be aware of others’ reactions, needs and individual differences.’ 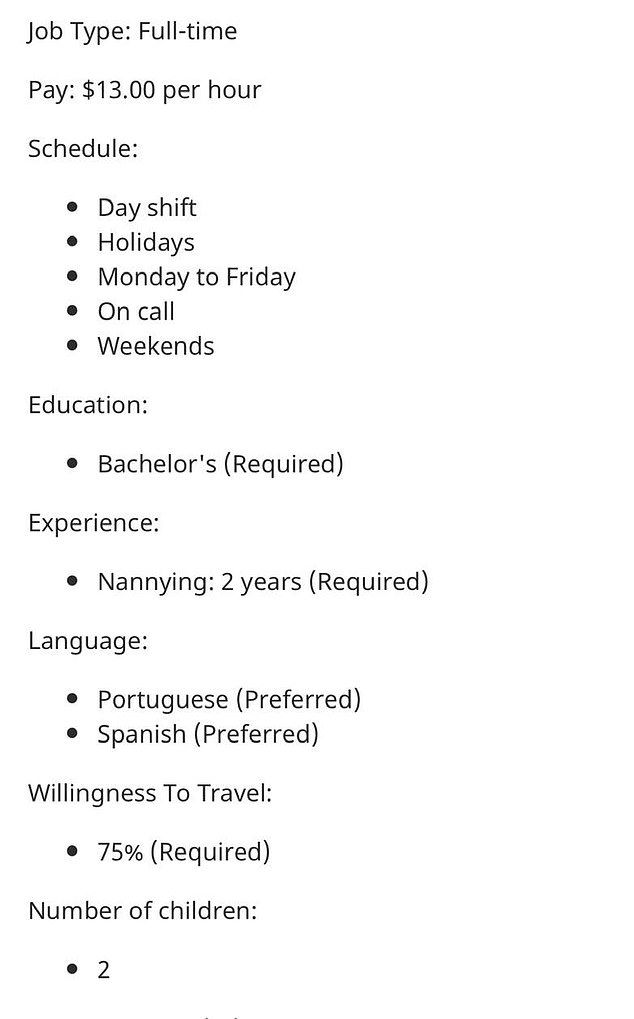 Yeah, right! Despite the paltry hourly rate, the family expects the nanny to take care of the childcare and all the household needs

‘So basically be my children’s parent and run my household,’ remarked one commenter.

‘I’d rather work at Arby’s,’ quipped another.

‘They’re asking to hire a stay-at-home parent,’ commented one more. ‘In the nanny world, those roles are titled nanny-manager and are typically paid double the base rate for a starter nanny.’

‘Just say you want a slave. Because with these requirements and this pay, this is essentially asking for someone to willingly slave themselves for them,’ wrote yet another. 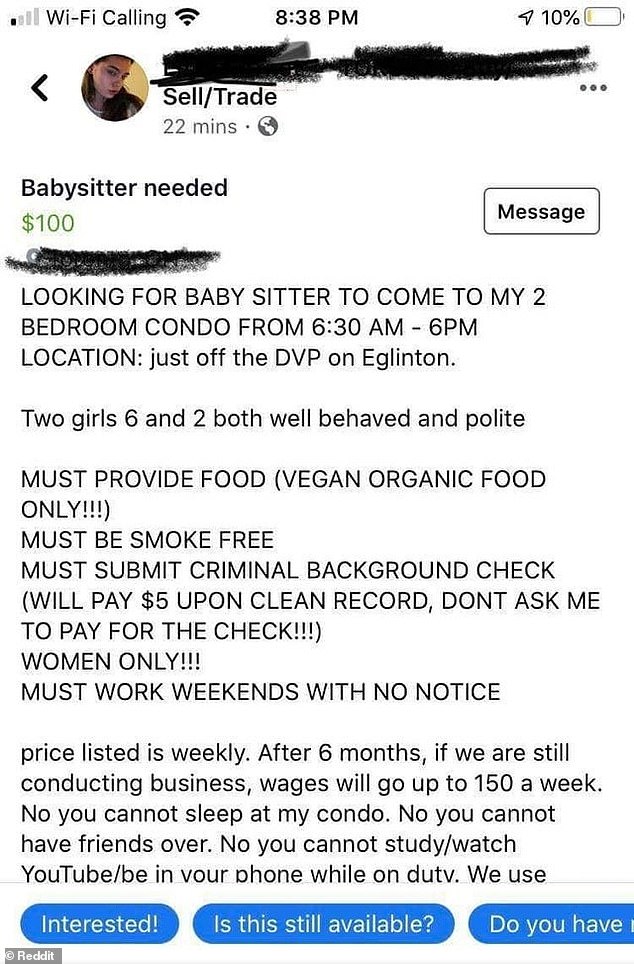 What?! Earlier this year, aCanadian mother advertised for a babysitter who would work a nearly 60-hour week for $100 CAD — and provide food

Back in July of this year, another outrageous job posting for a babysitter went viral.

The preposterous listing asks for a babysitter in Toronto who would watch two girls, age two and six, from 6:30 a.m. to 6 p.m. during the week, presumably Monday through Friday.

What’s more, the babysitter was expected to pay for food, which must be vegan organic.

Other requirements were that the babysitter be female, smoke-free, and pay for her own criminal background check (for which there will be a $5 reimbursement if it comes back with a clean record).

Additionally, the babysitter must work weekends with no notice.

‘After 6 months, if we are still conducting business, wages will go up to $150 a week,’ the post went on.

Unsurprisingly, the posting earned plenty of backlash on Reddit, from commenters who were outraged by the mother’s sense of entitlement.

‘Why would you expect a sitter coming to your house to provide food for your kids????’ demanded one.

‘I will never understand how people could leave their children in the care of someone who is willing to accept $1.66 an hour,’ said another, while someone with similar ideas added: ‘All the serial killers reading this are like, “jackpot!”‘

‘Someone needs to tell her that slavery is unconstitutional,’ wrote one more. 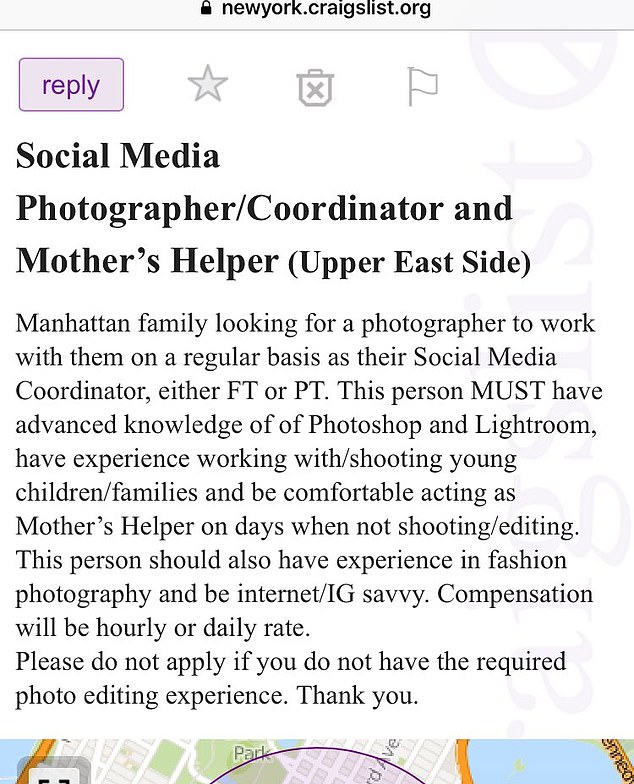 Not demanding at all! A presumably wealthy mother living on Manhattan’s Upper East Side was mocked last year for a Craiglist job ad

Go wild! The ad was posted on Craigslist on October 24, 2019 and shared on Twitter by New York City writer Dorsey Shaw on November 16, 2019

Meanwhile, last November, a presumably wealthy mother living on Manhattan’s Upper East Side was ruthlessly mocked for a hyper-specific job ad she posted on Craigslist.

The woman, who was not identified, used the site to advertise for what she describes as a ‘Social Media Photographer/Coordinator and Mother’s Helper.’

According to the description, she was looking to hire a creative type with fashion photography experience to manage her social media profiles — and to also care for her children.

The ad reads: ‘Manhattan family looking for a photographer to work with them on a regular basis as their Social Media Coordinator, either [full time] or [part time].

‘This person MUST have advanced knowledge of of Photoshop and Lightroom, have experience working with/shooting young children/families and be comfortable acting as Mother’s Helper on days when not shooting/editing,’ it went on.

‘This person should also have experience in fashion photography and be internet/IG savvy. Compensation will be hourly or daily rate. 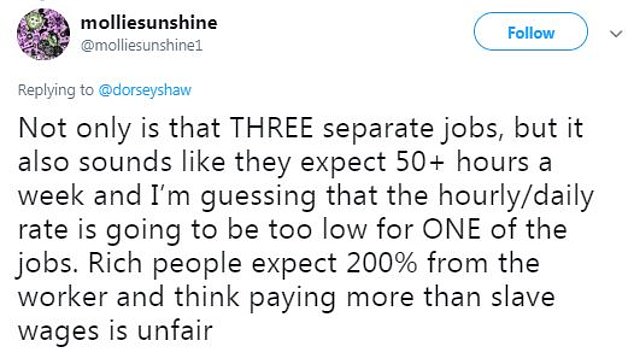 Internet mockery: The tweet earned thousands of likes and quite a few horrified replies

‘Please do not apply if you do not have the required photo editing experience. Thank you,’ she concluded.

The ad was posted on Craigslist on October 24 and shared on Twitter by New York City writer Dorsey Shaw on November 16.

‘May god have mercy on the soul of the person who takes this job,’ he wrote. ‘In the next 5 years NYC creatives will exist only to work on personal media projects for bored wealthy people.’

The tweet earned thousands of likes and quite a few horrified replies, including one reading: ‘Good god I hope this is just a serial killer.’

‘That is an argument for raising taxes on the rich!’ said another, while a third tweeted: ‘Pretty good odds this is Jared and Ivanka.’

Several people were furious that the woman expects a single person to do three separate jobs — photographer, social media coordinator, mother’s helper — just because they were posted together, and also speculated that she doesn’t even plan to pay very much.

‘That’s three job descriptions in one,’ wrote one.

‘Not only is that THREE separate jobs, but it also sounds like they expect 50+ hours a week and I’m guessing that the hourly/daily rate is going to be too low for ONE of the jobs,’ another said. ‘Rich people expect 200% from the worker and think paying more than slave wages is unfair.’

This New Hulu Show Is Perfect For Fans Missing ‘Fleabag’