The NSW Audit Office has released a scathing report on the government’s ability to cope with the effects of a heating climate, finding critical assets and services had yet to conduct risk assessments, such as for the state’s $50 billion public housing portfolio.

The findings, released on Tuesday, examined how effectively the Treasury and Planning departments supported agencies to get ready for increased threats from flooding, extreme heat, coastal erosion and other perils. 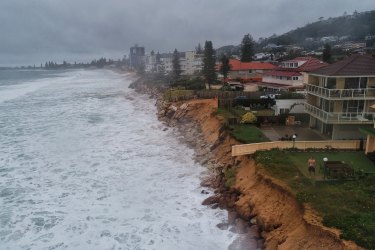 The NSW government is not taking the necessary steps to prepare agencies for climate change risks, the Audit Office has found.Credit:Nick Moir

It noted the government in 2016 pledged to create a statewide adaptation plan by the following year for public assets but had failed to complete it. All other states of Australia have such a plan.

“The absence of an overall adaptation strategy, and a statewide action plan, means that the [Planning] department’s climate risk and adaptation-related activities…have been occurring for at least four years without strategic direction, strong levers for coordination across agencies, and clear resourcing towards defined outcomes,” the Audit Office concluded.

Treasury had separately estimated that the fiscal and economic costs associated with natural disasters due to climate change will more than triple per year by 2061. Even so, there was little coordination across different agencies, with nine government entities responsible for $120 billion alone in assets failing to complete risk reviews.

NSW has endured a battering from the elements in recent years, ranging from a severe drought, the worst bushfires on record during the 2019-20 Black Summer, and last March’s extensive flooding around Sydney.

Despite setting emissions reductions targets – such as reaching net-zero carbon pollution by 2050 – climate change readiness policies have generally been lacking, with the National Parks and Wildlife Service among the few exceptions, the Audit Office said.

“The NSW government is determined to take decisive and responsible action to reduce emissions to net zero and manage the physical and financial impacts of climate change,” a Planning spokeswoman said, adding it would “closely consider its recommendations to bolster the state’s response”.

Among the gaps identified was the failure of the Land and Housing Corporation, which holds $50 billion of social housing assets to conduct a review. Projections for “significant increases in the number of heatwaves” mean it will get harder to limit the risk of heatstroke and other poor health outcomes for residents, the report found.

The problems are not just confined to the public sector either. The Building Sustainability Index (BASIX), a sustainable planning measure to drive cuts in residential water and energy use, is under review, but Planning is not considering the potential impact of climate change to these requirements, the Audit Office said.

“[H]omes in NSW are currently being built for the present, but not for a potential future climate,” it said.

Even in the eastern suburbs of Sydney, energy cooling requirements are set to rise 70 per cent by 2030 compared with 2020, and 300 per cent by 2070, the Audit Office said, according to a report commissioned by one council in January.

Labor’s climate spokesman Jihad Dib said the government “might promise a big game on climate change, but this report clearly shows they do not have the ability or desire to meet their own promises”.

“The people of NSW should be concerned that the Strategic Plan for the Climate Change Fund has never been finalised,” he said.

Independent NSW MP Justin Fieldn said “a failure to plan is a plan to fail, and it is clear that the NSW government’s plan to mitigate and adapt to climate change is inadequate”. 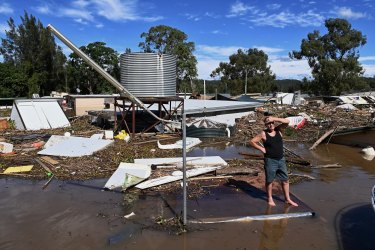 Brad McCutcheon, a resident of St George Caravan Park, surveys the scene during flooding of the Hawkesbury River near Sydney in March 2021.Credit:Nick Moir

“We see ongoing resistance to climate planning and adaptation strategies within the Coalition, particularly when it comes to water policy, land-use planning and development controls,” he said. “These short-term political considerations are leaving NSW communities seriously exposed to climate shocks in the future. This report serves as just the latest warning that we’re not doing enough.”

Local government was also getting little assistance from Planning, the Audit Office said, noting that the department’s 2018 Guide to preparing Local Environmental Plans (LEPs) for councils does not mention climate change.

“Of the 143 council LEPs we examined in March 2020, all make a reference to climate change, but this is only in relation to flood planning, reflecting guidance from the Department’s 2005 Floodplain Development Manual,” the Audit Office said.

Another gap is in Crown Lands, an agency that oversees about 42 per cent of the NSW’s land area, including coasts and infrastructure but had failed to develop adaptation plans.

Demi Lovato and Max Ehrich are over, plus Bill Murray’s legal drama and why Cardi B left Offset

Victoria makes pledge to cut carbon emissions in half by 2030