Dressed in a business suit and standing thigh-deep in seawater on the rocky coastline of his low-lying island home, Tuvalu’s Foreign Minister Simon Kofe addressed dignitaries via video at the Glasgow climate conference this week.

“In Tuvalu, we are living the reality of climate change and sea-level rise,” Kofe said. “We cannot wait for speeches, when the sea is rising around us all the time. Climate mobility must come to the forefront.” 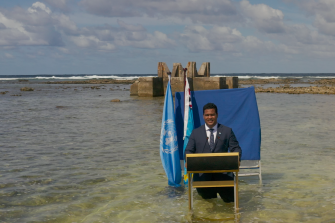 The poignant address immediately went viral, surprising Kofe and his colleagues. “I really did not expect the video and pictures to receive as much attention as they did. It was amazing to see that kind of support for our message,” he told The Age and the Sydney Morning Herald.

Kofe hopes the warm public response will translate into concrete action: “Often, we see powerful messages receive a great deal of attention and praise but not amount to any real global change.”

In forums such as Glasgow and elsewhere, the Pacific island states of Tuvalu, Fiji, Samoa and others have pushed advanced economies to cut carbon emissions in the face of global rising sea levels. They’d like a hopeful outcome, but are also having to prepare for the worst.

In his video, Kofe referred to climate mobility: people left with no choice to leave their home or livelihood because of the effects of catastrophic global warming. His homeland of Tuvalu, like other Pacific nations, is exploring legal and diplomatic avenues to remain a sovereign nation, even if its territory disappears under water within the next 50 to 100 years. 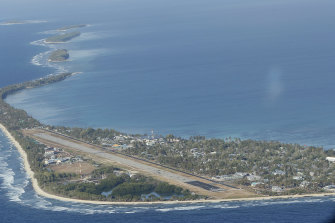 Funafuti, the main island of the nation state of Tuvalu, from the air. Only four Pacific island nations, including Tuvalu, were represented by their leaders at COP26, in Glasgow because of COVID-19 travel restrictions. Credit:AP

In October, Tuvalu launched its Future Now project, which seeks permanent international recognition of its statehood and for its existing maritime boundaries to be fixed. It will only form new bilateral relations with nations that recognise these.

“As much as the land, the sea is our home. Even if the land disappears, we expect the sea to remain our home and to be recognised internationally as our home,” says Kofe.

In August the Pacific Island Forum, which includes Australia, agreed on a declaration that the region’s maritime borders should be permanent, even if countries shrink due to sea level rise.

But what if a Pacific island nation like Tuvalu eventually disappears under water? A sovereign nation without land is uncharted territory in international law, says Jane McAdam, director of the Kaldor Centre for International Refugee Law at UNSW. The world has never faced a situation where a recognised state is destroyed by an environmental phenomenon.

Many international lawyers would say that for a country to be a state it has to have a defined territory, a population and a government. But in some Pacific islands it’s already the case that there are more citizens living away from their territories, for economic reasons, than within them. “And nobody is suggesting Tonga isn’t a country anymore,” says McAdam.

“A lot of international law scholarship on this subject has been very theoretical or abstract, without recognising there are real people whose lives are being affected,” she says.

Rising sea levels aren’t a future threat in the Pacific, but already a reality. Sea levels in the western Pacific have been increasing at a rate two to three times the global average, resulting in almost 30 centimetres of net rise since 1990.

A decade ago the Fijian government approached Fijian resident Frances Namoumou and her employer, the Pacific Conference of Churches, to assist with relocating people from the small coastal village of Vunidogoloa, on the island of Vanua Levu. 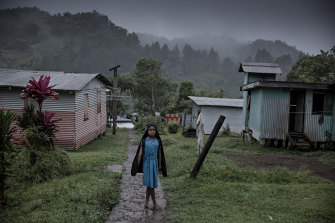 A young woman standing in the rain in the village of Naviavia, which has been bought from Fiji by Kiribati to ensure that Kiribati islanders have a place to go when the sea level overcomes their islands.Credit:Getty

Namoumou was taken aback: “We were looking at small atoll states like Tuvalu and Kiribati and thought it would happen to them quicker. Fiji has a bigger land mass – we did not expect some of our communities would have to relocate so quickly.”

But floods and erosion at Vunidogoloa caused by sea level rise and increased rains had become stronger, reaching homes on the shoreline and destroying crops.

Namoumou, who is co-ordinator for the ecology stewardship and climate justice program, oversaw the seven-year relocation of the village to a nearby location further inland.

Because of this project, Fiji became the first nation to develop planned relocation guidelines and a climate displacement policy. Internal relocation continues in Fiji and the Solomon Islands, Namoumou says.

“It is vital we talk about this issue. If we continue to avoid discussion of relocation and displacement, then in the worst-case scenario, when our islands are under water, we will have to go where other countries tell us,” she says. “We want to design and plan this ourselves.”

Namoumou says climate justice – a response to climate change that considers human rights and the historical responsibilities for climate change – is often missing from the discussion.

“These communities produce almost no emissions, yet they are having to lose their identity, that is rooted in their land, and their sacred totems,” she says. “Where are the rights of Indigenous people, their right to their land and way of life?”

The Pacific island nations have teamed up to pressure developed nations on emissions reductions and to demand that they meet commitments to provide financial aid for developing nations affected by climate change. 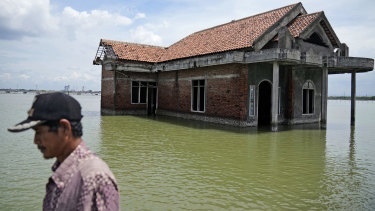 A house inundated by water due to the rising sea level in Sidogemah, Central Java, on November 8.Credit:AP

But COVID-era travel restrictions have meant fewer Pacific leaders are in Glasgow and their frustration was on display when Tuvalu Finance Minister Seve Paeniu made an emotional plea to delegates. “Our land is fast disappearing. Tuvalu is literally sinking. We must take action now,” he said.

“In the first two days of the world leaders’ summit, we heard passion, commitment and pledges. That was encouraging. However, since that time and through the corridors of this marvellous facility, we are not seeing that level of optimism being translated.”

Since the 1970s, there have been more than 300 planned relocations globally within countries where the state has moved populations to protect them from disasters and environmental change, according to research from the Kaldor Centre.

But crossborder relocations are still rare. In 2014 the government of Kiribati bought 2000 hectares of land on the Fijian island of Vanua Levu to become home to residents who may be forced to leave if their islands are submerged.

Suega Apelu bathes a child in a lagoon in Tuvalu, one of the Pacific Island nations most threatened by climate change.Credit:Getty Images

Some countries, like Tuvalu, are currently opposed to relocation, saying its population has the right to live and prosper on their own lands. “Relocating populations affected by climate change provides a ‘quick fix’ while failing to address the root causes of the crisis,” says Kofe. But Tuvalu respects the decisions of Pacific nations that choose relocation as an option.

There are some precedents of population relocation between countries following environmental catastrophe. After 1945, British authorities relocated most of the population of Banaba Island, part of Kiribati, to Fiji’s Rabi Island, after phosphate mining made much of Banaba uninhabitable.

And in 1963 the Australian government planned to relocate the entire population of Nauru to an island off the Queensland coast, also because of phosphate mining damage.

But the Nauruans refused to go, saying they did not want to lose their identity. Many criticised resettlement as a quick-fix solution by the governments that had devastated their homeland.

In Australia, two Torres Strait community leaders are taking the federal government to court, alleging it has failed to protect First Nations traditional owners living on the front line of catastrophic climate change.

Paul Kabai and Pabai Pabai, Gudamalulgal traditional owners from the remote, low-lying islands of Boigu and Saibai, say their precious cultural sites are being washed away and their islands’ soil ruined by salt.

Professor Tim Stephens, from the University of Sydney law school, says people are turning to the courts because the legislature and executive aren’t reacting quickly enough to climate change.

“We don’t have a national plan to deal with the displacement of people, or the impacts on particular problems,” he says. “It’s a great example of failure at a national level.”

Frances Namoumou says many Fijian communities are still recovering from the three or four cyclones that have hit her country over the past two years. She wants Australians to hold their state and federal governments to account over climate action.

“It’s not a far-off thing we are forecasting, but our daily experience,” she says. “I wonder how our Australian brothers and sisters feel when Pacific communities are suffering or struggling to respond to climate losses and damage.”

A guide to the environment, what’s happening to it, what’s being done about it and what it means for the future. Sign up to our fortnightly Clear Air newsletter here.

How Kate and William keep marriage playful and competitive is lesson for us all, expert says